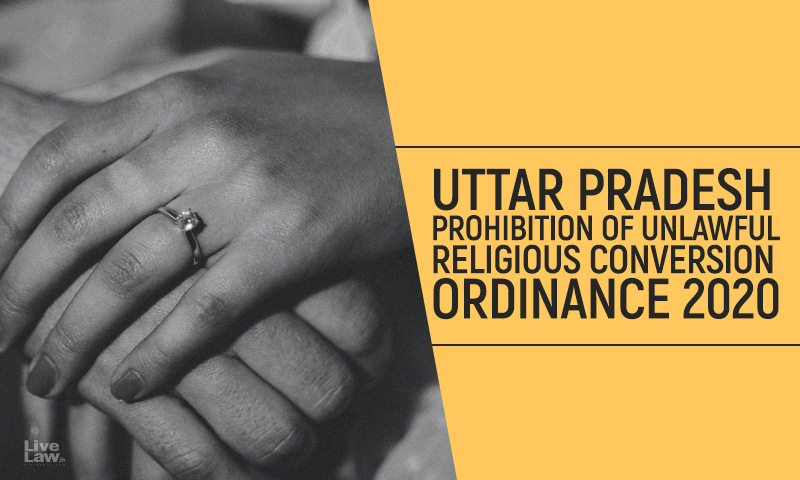 The Uttar Pradesh Prohibition of Unlawful Religious Conversion Ordinance, 2020, popularly known as the Love Jihad law, promulgated in November last year, raises several constitutional concerns. One such concern is the constitutionality of section 8(1), read with section 8(5). These provisions read together criminalise religious conversions if not done under the prescribed...

The Uttar Pradesh Prohibition of Unlawful Religious Conversion Ordinance, 2020, popularly known as the Love Jihad law, promulgated in November last year, raises several constitutional concerns. One such concern is the constitutionality of section 8(1), read with section 8(5). These provisions read together criminalise religious conversions if not done under the prescribed form.

The jurisprudence on anti-conversion law has a long history in India. The juridical benchmarks once used in the form of constitutional schemes under Art. 21, have been modified by newly adopted facets of right to privacy, and right of choice.  Hence the U.P. Ordinance needs to be assessed and analysed under the newly recognised principles of right to privacy, right to choose and the extent of permissibility of State intervention.

The Preamble identifies the intention and ambition of our Constitution-makers, i.e. "to secure to its citizens…. LIBERTY of thought, expression, belief, faith and worship". A reading of this objective on the principle of literal interpretation leads to the conclusion that a certain freedom must be given in matters of personal choice. "Liberty" suggests limitation on the power of State intervention and interference from non-state entities. The Constitution mandates separation of power and quasi-federalism which further reinforces checks on state intervention in matters of personal liberty. The objective of "FRATERNITY assuring the dignity of individual…" visualised secularism way before it was formally recognised in the 1970s.

The preamble so reveals an aspiration to assure the people of India such a State where they shall have protection from arbitrary exercise of power, whether from the State or otherwise. The Constituent Assembly planted the seed of India's growth in the people, and in due course of time, the assurance of liberty and freedom was decreed as part of the basic structure of the Constitution of India.

Is the Ordinance violative of Article 21 of the Constitution?

Section 8(1) of the U.P. Ordinance mandates a certain procedure to be followed if one wishes to go under religious conversion, which involves giving a prior notice to a state authority along with inviting any kind of objection from the society. Section 8(5) mentions criminal penalties in the case if prescribed procedure is not followed as under section 8(1). The nature of the provision, in that it seeks State authorisation in a personal affair, is a violation of fundamental right of privacy. Fundamental rights grant people the opportunity for growth, and ensure that the requirement of State consent does not hinder such growth. Conversion being an issue of personal choice, a person should be given liberty to act as per their legitimate wish. Right to religious conversion forms part of the right to privacy since it deals with one's choice of faith and control over one's conscience.

Does Art. 25 include the right to religious conversion?

Article 25 reads "Freedom to conscience and free profession, practice and propagation of religion…." The freedom so imparted is towards "faith" or "religion" and not "a faith" or "a religion". That is, a person has freedom to follow, adopt, practise any religion, faith, or belief and not merely a specific religion with which he was born, subject to public order, morality, and health. This position was acknowledged in Rev Stanislaus vs State of Madhya Pradesh, where the Court held that right to practise faith or religion is applicable to every religion equally. Conversely, the right has been guaranteed to all people of all religions, and not just followers of one religion.

There are other judicial precedents, which support overt acts of professing one's beliefs and religion. Also, there are several judgments which place authority over the assertion that one's right to freedom of choice cannot be curtailed by a collective societal will, nor that of parents, especially regarding one's right to choose faith or life partner of a different faith. The Constitution grants freedom of conscience to afford to persons the right to choose "any faith of their choice or no faith, while no religion being the state-religion".

What is the permissible extent of State Intervention in matters of religion?

History of anti-conversion laws in India:

The term "secularism" was included as part of the Preamble in the 1970s, signifying the unwillingness of the Central Government to have a State-religion. Upon this, several states soon passed laws prohibiting religious conversions, to curtail religious conversions. Currently there are eight states which have such statutes in effect. Efforts were also made to enact anti-conversion laws at the national level, but it could not garner sufficient support in the Parliament. The Rev Stanislaus judgment, which dealt with anti-conversion laws in Madhya Pradesh and Orissa, determined the position of law of conversion of people by other people, but not on the people's own right of choice of religion. The state acts also do not overtly criminalise the acts of people willing to convert by their own choice and will.

But the provisions of the U.P. Ordinance criminalise the act of religious conversion, punishing the converted and the converter alike. This not only violates the principle of State intervention, but also the rights ensured under Articles 21 and 25.

On 9th April 2021, Nariman J., while hearing a PIL seeking a central law for regulating conversion, observed, "adults have a right to choose religion" while pointing out that such laws are against Article 14, 21 and 25 of the Constitution of India. The petition was so withdrawn.

The unnecessary restrictions sought to be introduced through laws, such as the U.P. Love Jihad Ordinance, banning religious conversions should be curbed. Sections 8(1) & (5) of the Ordinance should be held illegitimate and unconstitutional.

UP Ordinance Criminalizing Religious Conversion By Marriage Is An Assault On Personal Liberty;

Ambedkar, Minorities And The Bogey Of Love Jihad