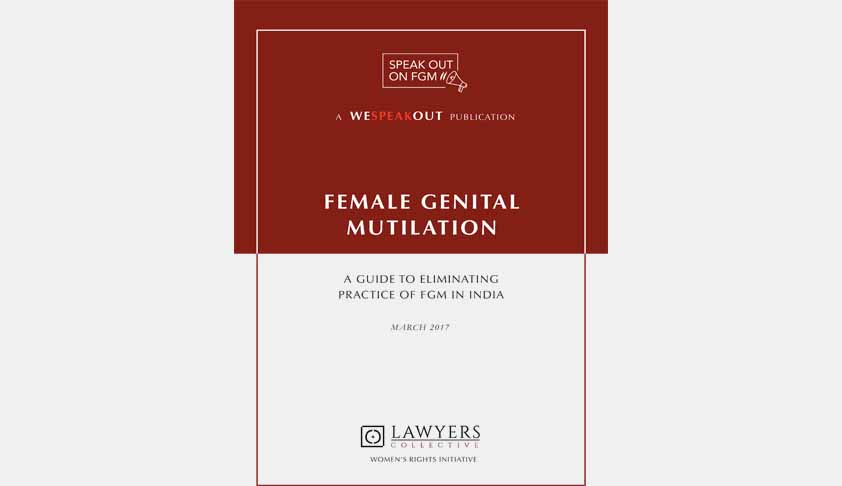 Union Minister for Women and Child Development Maneka Gandhi recently said if the Dawoodi Bohra community does not agree to give up the practice of female genital mutilation (FGM) or khatna, then the government will enact a law to prohibit the practice in India.

FGM is a crime under the Indian Penal Code and the Protection of Children from Sexual Offences (POCSO) Act, Maneka Gandhi said.

This statement was made in the backdrop of the Supreme Court’s notice to the Centre seeking a reply in a PIL advocating a complete ban on the practice of FGM asking for it to be declared a cognisable, non-compoundable and non-bailable offence.

The PIL also stated that the practice of FGM is illegal in several countries such as the US, Australia, Nigeria, Gambia and the UK.

In light of these developments, let us take a look at a research paper/report prepared by Indira Jaising’s Lawyers Collective Women’s Right Initiative (LCWRI) and Speak Out on FGM.

This 57-page report, entitled ‘Female Genital Mutilation: A guide to eliminating FGM in India’, looks at the legal framework surrounding the issue, dynamics of the Dawoodi Bohra community, FGM and its practice in India.

According to the report, an online survey carried out amongst Bohra women by Sahiyo, an NGO, suggests that 80 per cent of the 400 respondents have been through the process of khatna.

The report states that female genital mutilation/cutting (FGM/C) comprises all procedures involving partial or total removal of the external female genitalia or other injury to the female genital organs for non-medical reason.

While it is mainly carried out on girls between the ages of 1 and 15 years, occasionally adult and married women are also subjected to this procedure.

Over 200 million girls and women have undergone FGM/C. The practice is more common in 30 countries across Africa and in some countries in Asia (particularly the Middle East) and Latin America and among migrants from these areas. In India, this practice is common amongst the Bohra community, where the ritual is referred to as ‘Khatna’ or ‘Khafz/Khafd’. Khatna essentially involves cutting the tip of a girl's clitoris when she is 6-7 years old.

FGM/C, in many instances, is also perceived as a way to cleanse a girl from impure thoughts and desire. Sexual desire in girls and women is viewed as something from which they need ‘protection’. This perceived protection extends beyond protection of the girl herself to the protection of the whole family’s reputation.

Disobedience May Lead to Social Boycott

Dai-Al-Multaq is a title for the spiritual leader and head of the Dawoodi Bohra community. The report states that the Dai has complete control over the lives of the Bohras, including in secular matters. Several Bohras and their families are victims of social boycott. The reason behind it is that they questioned various religious and administrative practices within the community.

The threat and fear of social boycott or excommunication for any form of protest or disobedience is so deep and so real that not many have the stomach to be booted out of the confines of such a close-knit community, the report states.

Interestingly, the report points out that the Bombay Prevention of Excommunication Act was enacted as a redressal sought by some boycotted members of the Dawoodi Bohra community.

The WHO, UNFPA and UNICEF in a joint statement defined female genital mutilation as “all procedures that involve partial or total removal of the external female genitalia, or other injury to the female genital organs for non-medical reasons”.

According to the report, countries like the UK and Australia have enacted specific legislation against female genital mutilation.

Looking at the existing legal framework in India, the report states that Sections 319 to 326, IPC address varying degrees of hurt and grievous hurt. According to the WHO, the immediate complication of FGM/C can include excessive bleeding (hemorrhage), genital tissue swelling, wound healing problems, injury to surrounding genital tissue, shock and death; while the long-term consequences include urinary problems, vaginal problems, menstrual problems, sexual problems etc. Thus, the report recommends prosecution of persons undertaking FGM/ under the IPC.

According to a 2008 study ‘A Qualitative study on FGM/C among Dawoodi Bohra community’ conducted by the UNFPA, in a focus group discussion with the women of the community, all were of the opinion that if FGM/C is ‘sunnat’ (normative) for them, then they must follow it.

In an online survey of Dawoodi Bohra women, 56 per cent said they had to undergo FGM/C for religious purposes and 45 per cent said it was to decrease sexual arousal.

The practice of FGM/C is often sought to be justified on grounds of protecting women from sexual desires and on grounds of religious freedoms of communities.

According to the report, even if one assumes for the sake of argument that FGM/C is a religious practice, such practice is not protected under Article 25 as it violates Articles 14, 15 and 21 of the Indian Constitution.

The report also recommends that all state governments along with religious/community leaders should raise awareness among the youth about the need for prevention of the practice of FGM/C or khatna. Also, jamaat resolutions must be issued all over the country decrying the practice of FGM/C and calling upon the community members to stop practising FGM.

In conclusion, the report states that there is no specific mention of FGM/C in our laws and the practice largely goes unnoticed. It has also been seen, internationally, that it has proved necessary to have a specific law dealing with the subject, which addresses not only prosecution but also prevention, education, awareness building, relief and rehabilitation.

Thus, on the basis of the above facts, this report recommends a specific law on FGM/C in India.