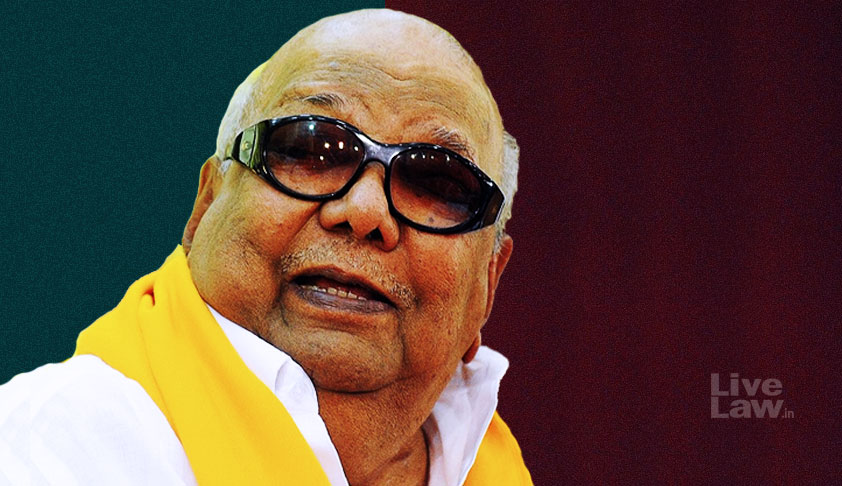 The Madras High Court has allowed ex-CM and DMK leader Karunanidhi to be interred near Anna Memorial at Marina Beach, after a special hearing session.

The special hearing was held by Acting CJ Huluvadi.G Ramesh and Justice S.S Sundar when DMK moved an urgent petition against the decision of State Government denying permission to bury Karunanidhi at Marina Beach. After hearing the matter, the Court ordered :

"...the writ petition is allowed with a direction to the Respondent Authority to provide a place for the decent burial to lay the mortal remains of (Late) Dr.Kalaingar M.Karunanidhi, former CM of TN on the Marina Beach within the precincts of the burial place of the founder of DMK Party and Former CM of TN, Thiru CN Annadurai, namely at Anna Memorial at Kamrajar Salai, Chennai, in consonance with the rough sketch provided by the petitioner".

The DMK leaders like MK Stalin, MK Azhagiri, Kanimozhi etc. had made a request before Tamil Nadu CM E.K Palaniswami to allocate space to bury M.Karunanidhi near the memorial of former Chief Minister Annadurai at Marina Beach. However, the Government expressed inability in allocating space at Anna Memorial in Marina Beach citing cases pending at HC against burials and cremations in Marina beach, and instead offered 2 acres land near Gandhi Mandapam at Sardar Patel Road, Adyar.

It was in this background that the DMK decided to approach the High Court through petition filed by R.S Bharathi,Organizing Secretary of Dravida Munnetra Kazhakam(DMK) Party. On the basis of DMK request, a midnight sitting was held at the residence of Acting CJ H.G Ramesh, taking into account the submission that the delay in hearing might cause agitated outburst of emotions resulting in violence across the state.

Activist "Traffic" Ramaswamy had filed a PIL against the construction of Jaya memorial in Marina beach in violation of CRZ Regulations. He had also sought the relocation of mausoleums of MGR and Annadurai from Marina Beach. There were other three similar petitions  against construction of memorials in Marina beach, filed by PMK's Balu, D K Doraiswamy and Adv V.Gandhimathi.

It may be noted that during January 2018, a Division Bench of Madras High Court headed by the then Chief Justice Indira Banerjee had orally expressed opposition to construction of memorial of Jayalalitha at Marina Beach. The Court had observed then that Marina was the second longest beach in the world, and that no hindrance to access and enjoyment of the beach should be placed.

However, during the course of hearing of DMK plea, the petitioners who were opposing memorials at Marina Beach expressed their willingness to withdraw their petitions. The petition by Gandhimathi was already withdrawn when the matter was listed during the regular court hours on August 7.

Another petitioner Doraiswamy visited the residence of the Acting CJ late night to state that his petition against burials at Marina was being withdrawn.

I withdraw all cases in this regard because Kalaignar Karunanidhi is important for us. So now, there are no legal hurdles for govt: Doraisamy, advocate who filed petition against burial on Marina, on TN govt denies burial space for Karunanidhi near Anna Memorial at Marina beach pic.twitter.com/Hh7fq9FO1t

However, there was drama after Traffic Ramaswamy's lawyer told media that he was not withdrawing his case. But today, he filed a memo before the bench of Acting CJ H.G Ramesh and Justice Sundar to the effect that he had no objection to burial of Karunanidhi at Marina. The other petition by PMK's Balu was also stated to be withdrawn. Accordingly, the Court dismissed the PILs of Traffic Ramaswamy, Doraiswamy and Balu, clearing the decks for Karunanidhi's burial at Marina.

Stand of the Government.

The TN Government had filed a counter-affidavit, opposing the plea. It was stated that Jayalalitha was laid to rest at Marina due to protocol, as she was Chief Minister at the time of her death. It was contended that similar benefit cannot be extended to an ex-CM. It was also pointed that as CM Karunanidhi himself had not allotted space at Marina for burial of Janaki Ramachandran, since he was aware of the protocol. Hence, the government decision was in accordance with precedents.

The Government also contended that it had issued only a press release informing its decision to allot space for Karunanidhi near Gandhi Mandapam, and that such a press release cannot be subjected to challenge in a writ petition.

Senior Advocate C.S Vaidyanathan appearing for the State Government, in the absence of Advocate General Vijay Narayan, also submitted that the withdrawal of PILs opposing memorials in Marina was "stage managed". He said that there was no corresponding duty on the part of the Government to accede to the request of petitioner, and hence writ of mandamus could not be issued.

Senior Advocate P. Wilson submitted that even a press release can be challenged in writ proceedings, as what mattered was the substance of the decision and not its form. It was only just and proper that Karunanidhi be buried next to the memorial of his ideological mentor Annadurai, the founder of DMK. He also submitted that ideologies of AIADMK & DMK were similar, and hence Karunanidhi should be laid to rest at Marina, where MGR was also interred. It was his further submission that it would be inappropriate to bury Karunanidhi near memorials of Rajaji and Kamarajar near Gandhi Mandapam at Adayar, as suggested by the State Government, since the ideologies of DMK patriarch and those leaders were totally different. Denial of burial at Marina will hurt the sentiments of several persons.

Case against denial of burial land by Tamil Nadu Govt at Marina beach for M #Karunanidhi: DMK's lawyer says 'Anna, who is the founder of DMK, used to say my life & soul is Karunanidhi. Burying Karunanidhi next to Gandhi Mandapam cannot be termed as a decent burial.'[ANI]

After a marathon session of intense hearing, the Acting Chief Justice dictated orders, allowing Karunanidhi to be laid to rest at Marina Beach, overruling the objections of State Government. The Court ordered :

In view of the urgency of the matter, the Court issued the operative portion of the order.

Read the Operative Portion of Order