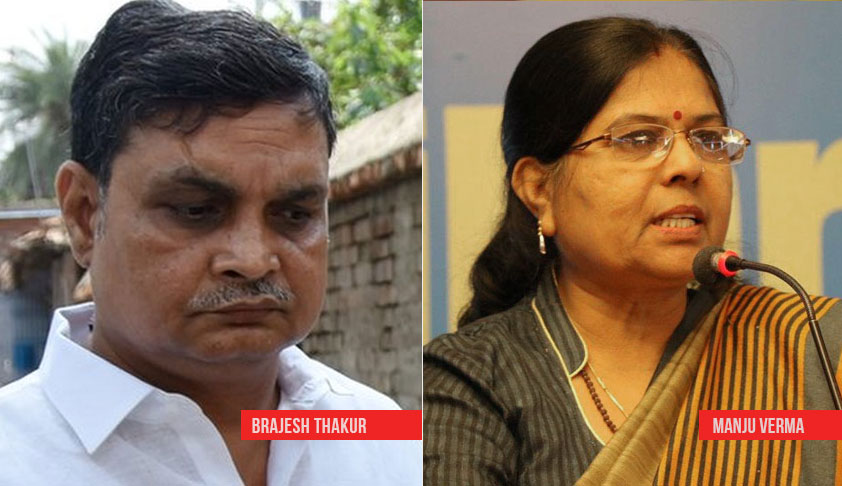 The Supreme Court Tuesday asked the Bihar police why former state minister Manju Verma has not been arrested in a case related to the recovery of ammunition in a Muzaffarpur shelter home where several girls were allegedly raped.A bench of Justices M B Lokur, S A Nazeer and Deepak Gupta also directed that Brajesh Thakur, prime accused in the Muzaffarpur shelter homes sexual abuse case, be...

The Supreme Court Tuesday asked the Bihar police why former state minister Manju Verma has not been arrested in a case related to the recovery of ammunition in a Muzaffarpur shelter home where several girls were allegedly raped.

A bench of Justices M B Lokur, S A Nazeer and Deepak Gupta also directed that Brajesh Thakur, prime accused in the Muzaffarpur shelter homes sexual abuse case, be shifted to the Patiala high security jail in Punjab from Bihar's Badarpur jail.

Verma's husband was the owner of the home.

The alleged sexual exploitation of the girls was first highlighted in an audit report submitted by the Tata Institute of Social Sciences (TISS) to the state's social welfare department.

Justice Sudhir Singh turned down the application of Verma, against whom an FIR was lodged in August at Cheria Bariarpur police station of Begusarai district after the seizure of about 50 cartridges from her residence.

The seizure was made during a raid conducted at Vermas Patna and Begusarai residences by the Central Bureau of Investigation in connection with the Muzaffarpur shelter home sex scandal.

Verma had stepped down as the Social Welfare minister following reports alleging close links between her husband Chandrashekhar Verma and Brajesh Thakur, the prime accused in the scandal.

She had moved the high court after her anticipatory bail plea was rejected by a Begusarai court on August 25.

The Supreme Court on Thursday issued notice to the prime accused in the Muzaffarpur Shelter Home case, Brajesh Thakur, to show cause as to why he should not be shifted outside of the state of Bihar in the interest of a free and fair investigation.

Upon perusal of the CBI status report in connection with the unfortunate episode, Justice Madan B. Lokur remarked, “this is very, very sad. This is scary....terrible....what is the state doing? This cannot be allowed to happen....what kind of a person is this man?”

The Special Public Prosecutor drew the attention of the bench, also comprising Justices Abdul Nazeer and Deepak Gupta, to the earlier order of September 20 when the court had recorded that Thakur owns the shelter in question and such is his power and influence that the residents of the locality had not even informed about the screams of the girls that they had heard coming from the home.

When Justice Lokur considered Thakur’s transfer to a confinement outside of Bihar, Senior Counsel Ranjit Kumar, appearing on behalf of the state, sought to inform the bench that the two central jails in Bihar- Bhagalpur and Hazaribagh- are considered to be the safest, even in case of offences under the TADA.

However, When Justice Gupta observed that in view of the revelations in the status report, a transfer may be necessary, Mr. Kumar bowed down that he is not countering the bench’s decision, only conveying the knowledge he has.

Advocate Aparna Bhat, appointed Amicus Curiae in the matter, also expressed concerns regarding the security in jail, advancing that Thakur could influence the staff in the jail, overpower them and obtain access to a means of communication.

When the bench inquired if the shelter home building has been demolished, she replied that it is sealed. Mr. Kumar asserted that with no ventilation, the building is worse than a jail and that the state shall take requisite steps to demolish it. Ms. Bhat suggested that the building may be necessary for forensic purposes and that the structural investigation of the building be restricted to the CBI.

The bench also sought to know why Chandrashekhar Verma, husband of Bihar’s former social welfare minister Manju Verma, has not been arrested for the possession of illegal ammunition recovered in a CBI raid conducted in connection with the rape case, to which Mr. Kumar submitted that the state shall file a full report.

As for the trial to be shifted out of Muzaffarpur to another district, if not to another state, the bench was of the opinion that the chargesheet be allowed to be filed first before any decision in this regard is taken. The matter is next scheduled to be heard on Tuesday.