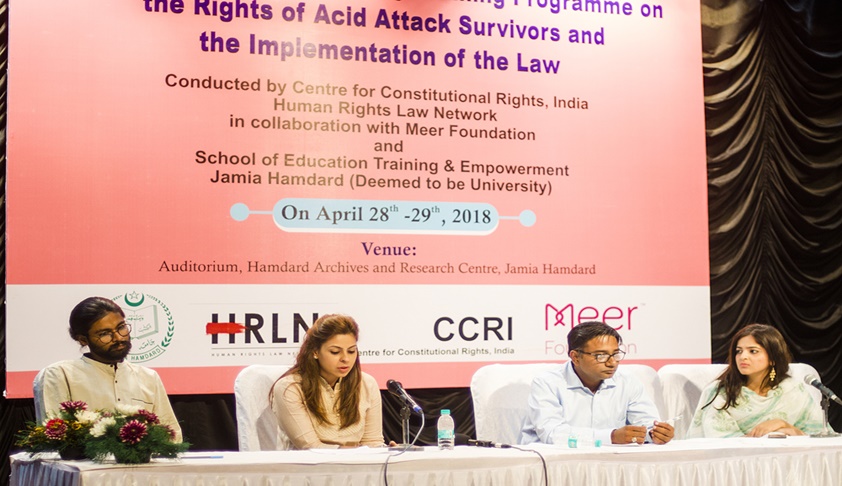 Despite the law coming into place in 2013 making acid attack a separate penal offence and provisions for rehabilitation of acid attack victims in place, the survivors of such attacks often face a tough time in rehabilitation and getting due compensation to assist in the medical treatment etc.

With a view to provide a much-needed shoulder to the victims of acid attacks and impart more force to the fight against the menace of acid attacks, the Human Rights Law Network in collaboration with Meer Foundation and Jamia Hamdard University had organised a two-day “National Meeting and Legal Training Programme on the Rights of Acid Attack Survivors and the Implementation of the Law” which concluded on Sunday.

The two-day training witnessed the participation of more than 100 people, including nearly 50 acid attack survivors, from across the country.

It provided a platform to several survivors, who were yet to receive the compensation, to air their grievances and concerns while many had the chance to discuss their medical condition with senior plastic surgeons.

The programme focussed on imparting legal training to these survivors so that they can pursue their cases more actively while also beginning to act as network points for promoting further litigation among their contacts across the country.

“The other participants were lawyers, law students and activists who interacted with experienced Supreme Court and high court advocates from HRLN and were offered more advanced knowledge, tips and guidelines on subjects such as filing PILs across courts in India, getting the sale of acids banned, seeking more active police cooperation and enhanced compensation for survivors,” HRLN said.

HRLN founder and senior Supreme Court advocate Colin Gonsalves also addressed the audience and offered a background in HRLN’s battle against acid attacks over the past five years.

DCP South Vijayanta Arya also spoke to the participants about the role of police in fighting against acid attacks and interacted with survivors.

Chander Jit Singh, secretary, Delhi State Legal Services Authority, also spoke to the participants about the steps being taken to offer relief and rehabilitation to survivors from Delhi.

Dr Fraheen Malick, a member of the Delhi Commission for Women, who takes keen interest in fighting acid attacks, also interacted with the audience.

“The aim of the meeting was to come up with an action plan that we will implement over this year across the country. For instance, to act against the source of the problem, HRLN plans to file a Public Interest Litigation in the Supreme Court seeking increased regulation of sale of acids and corrosive substances to private citizens. We will also organize a protest march with acid attack survivors later this year. Other plans include getting seeking funds under CSR for the education of children who have suffered acid attacks,” HRLN said.