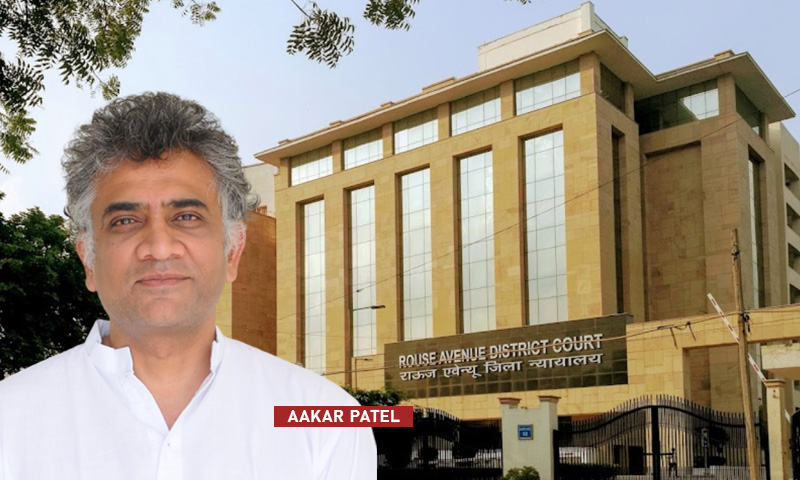 Delhi's Rouse Avenue Court on Thursday ordered the Director of Central Bureau of Investigation (CBI) to tender a written apology to former Amnesty International India Chief Aakar Patel, who was restrained from boarding a US-bound flight from Bengaluru airport on Wednesday, owing to a Look Out Circular issued by the agency.Finding that the issuance of LOC was a "deliberate act" of...

Delhi's Rouse Avenue Court on Thursday ordered the Director of Central Bureau of Investigation (CBI) to tender a written apology to former Amnesty International India Chief Aakar Patel, who was restrained from boarding a US-bound flight from Bengaluru airport on Wednesday, owing to a Look Out Circular issued by the agency.

Finding that the issuance of LOC was a "deliberate act" of the investigating agency to put restriction on the valuable rights of the accused, Additional Chief Metropolitan Magistrate Pawan Kumar said,

"In this case, a written apology from head of CBI i.e. Director, CBI acknowledging lapse on part of his subordinate, to applicant would go a long way in not only healing wounds of applicant but also upholding trust and confidence of the public in the premier institution...A copy of the order be accordingly sent to Worthy Director, CBI for ensuring compliance. It is expected that this court shall be duly apprised about the compliance of the order."

The CBI purportedly stopped him from leaving the country on the basis of a Look Out Notice issued in connection with a case registered by the agency against Amnesty International India for alleged FCRA violations.

In its 10-page order, the local Court said that there cannot be any unfettered control/restriction on the right to travel and it is the part of fundamental rights and enshrined under Article b 19 and 21 of the Constitution.

It observed that LOC can be issued by the competent authority on the application moved by the Investigating agency in cognizable offences, where the accused was "deliberately evading arrest" or "not appearing" in trial court despite NBWs and other coercive measures and there are apprehensions that the accused may evade trial or arrest.

Thus, the Court was of the view that the LOC in the present case was issued in violation of the guidelines laid down by the Delhi High Court and office memorandum of the concerned Ministry.

"The only reason stated in the reply for the issuance of LOC is the apprehension that he may leave the country to evade the prosecution. As per CBI, the LOC was got issued on the suspicion of the accused being the flight risk...if the accused was a flight risk during, he would have been arrested during the investigation. There is an inherent contradiction in the stand taken by CBI, on the one hand, CBI claims that the LOC was got issued as the applicant was a flight risk, and in contradiction to that the accused was not arrested during the investigation and charge sheet was filed without arrest."

Further, the court noted that no explanation is forthcoming from the CBI as to what precaution or measures were taken during the investigation or at the time of filing the charge sheet to ensure the presence of the accused during the trial.

Thus, the court has granted him liberty to approach the Court or other forum for the monetary compensation.

"It is correct that the discretion for moving the application of LOC lies with the investigating agency but the discretion can not be exercised arbitrarily without any justifiable reasons or grounds," the Court said while directing the agency to withdraw the LOC.

Before parting, the Court observed that recourse to stringent provisions of issuance of LOC has direct bearing upon the fundamental rights of the person and therefore, such measure should be taken cautiously and in exceptional circumstances.

"In the case in hand, there was no such ground or reason for issuance of LOC. LOC should not have been issued merely on the basis of apprehensions arising out of whims and fancies of the investigating agency...Before issuance of LOC, the consequences on the rights of the affected person should have been foreseen. The fundamental rights of any person can not be curtailed without any procedure established by law."