Action Should Be Taken Against Investigating Officer Who Leaks Private Data Of Accused To Third Parties : Karnataka High Court 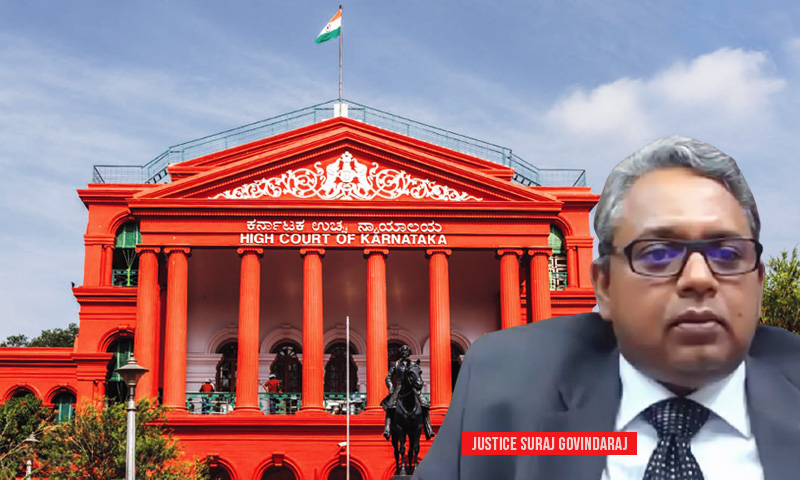 In a significant verdict, the Karnataka High Court has held that an investigating officer has no right to disclose the private date seized from the smartphones or electronic gadgets of an accused to a third party, without the written permission of the concerned court.An investigating officer who leaks such private data to third party should be proceeded against for dereliction of duty...

In a significant verdict, the Karnataka High Court has held that an investigating officer has no right to disclose the private date seized from the smartphones or electronic gadgets of an accused to a third party, without the written permission of the concerned court.

An investigating officer who leaks such private data to third party should be proceeded against for dereliction of duty or delinquency, the High Court added.

The Court said that use of such data  data retrieved during the course of investigating would not amount to violation of the Right to Privacy, as it is covered under the exceptions given in the KS Puttaswamy judgment(which held right to privacy a fundamental right).

However, in no case,such details or data can be provided by the investigating officer to any third party during the course of investigation without the written permission of the court, which is seized off the matter.

"The responsibility of safeguarding the information or data which could impinge on the privacy of the person will always be that of the investigating officer, if the same is found to have been furnished to any third party the investigation officer would be proceeded against for dereliction of duty or such other delinquency as provided", a single bench of Justice Suraj Govindaraj held.

Justice Suraj Govindaraj was hearing a petition filed by Virendra Khanna accused in the infamous sandalwood drug case, who challenged the order passed by the Special NDPS Court dated 14-09-2020 by which it directed the petitioner to cooperate for unlocking his mobile phone seized by the police as illegal and abuse of process of law.

Importantly, the Court held that a search warrant is necessary for the examination of a smartphone, laptop or email account of an accused. An accused cannot be constrained to disclose the password/passcode of his gadgets or accounts through a  mere order of a trial court to cooperate with the investigation.

The Court laid down the procedure for examining smart phones or email accounts :

In the instant case, the Court set aside the trial court's order which asked the accused to furnish the password while directing him to cooperate with the investigation. The Court said that the investigating officer will have to seek a search warrant as per the above procedure to examine the smartphones/email accounts.

Senior Advocate Hashmath Pasha appearing for the petitioner submitted that insisting the petitioner to unlock his mobile phone which contains his personal information is violative of Right to Privacy as held by the Supreme Court in the case of Justice K S Puttaswamy.

Further it was argued that there is no specific law enabling the taking away of his right to privacy or for a direction to be given by any court either to give password of his mobile or to unlock the same and further use of the data contained in his mobile for the purpose of investigation.

Moreover, since the right to privacy is recognised as a fundamental right under Article 21 off the Constitution, to take away this fundamental right, even off an accused there must be a law enacted by Parliament and the Law must meet the test of Article 21 as laid down in Maneka Gandhi''s case, ie it must be just fair and reasonable not illusory.

The court noted that today technology has become all-pervasive. A telephone which was used in the past for communication now called a landline has given way to sophisticated instruments like smartphones which have computing powers probably thousand times more than that off computers off 90''s leading to the mobile phone or a smartphone becoming the central device for running the affairs of the person.

"The smartphone is being used today for various activities,, including sending messages, conversing on social media like WhatsApp,, Facebook,, Twitter,, Instagram, Telegram, Signal etc, sending and receiving emails from various accounts be their personal or official.Usage of the smartphone for the purpose of accessing the internet browsing world wide web etc.. carrying out online transactions, online purchases either by internet browser or through specified and specific applications, storage of photographs, documents,, retrieval of the documents stored in the cloud or on a remote server etc the list could go on and on. Essentially today, a smartphone in many cases has replaced the laptop, which has replaced the office and the smartphone by itself is an office for several persons."

Following which the court held that "The Court cannot per se issue any directions to the accused to furnish the password, passcode or Biometrics and direction to cooperate. The gathering of information and/or evidence mode and methodology of investigation is in the ex-facie domain of the Investigation officer".

Coming to the contention raised by the petition about right to privacy, the bench said "Once the investigating agency has an access to a electronic equipment more particularly smartphones and/or laptops the investigating officer has a free access to all data not only on the said equipment but also any cloud service that may be connected to the said equipment, which could include personal details, financial transactions, privileged communications and the like."

"The rules which are applicable to physical document where a particular document could be classified as a privileged communication and or strictly private and confidential cannot apply to data which is stored on a smartphone or any other electronic equipment since once an investigating officer has an access to the said smartphone, electronic equipment or email account he would have complete access to the data."

"Though such data may not be incriminatory may be very private or secret to the person or such data could incriminate the said person in any particular offence. The use of such data during the course of investigating would not amount to violation of the Right to Privacy and would come within the exceptions carved out in the Justice Puttaswamy's case. However, the disclosure making public or otherwise in court proceedings would have to be determined by the concerned judge by passing a judicial order.

Justice Govindaraj also held that "By providing off password, passcode or biometrics, there is no oral statement or a written statement being made by the accused like the Petitioner herein, therefore it can not be said to be testimonial compulsion".

"A direction to provide a password, passcode, biometrics would not amount to testimonial compulsion. It is only in the nature of a direction to produce a document. Mere providing access to a smartphone or e-mail account would not amount to self incrimination since it is for the investigating agency to prove its allegation by cogent material evidence", the Court held.

It added "Mere silence of the said person would not amount to consent on behalf of such person. If a person were to refuse the administration of polygraph test, no such polygraph test could be administered and even if administered, the result of the said test would be void and cannot be considered by a Court of Law."