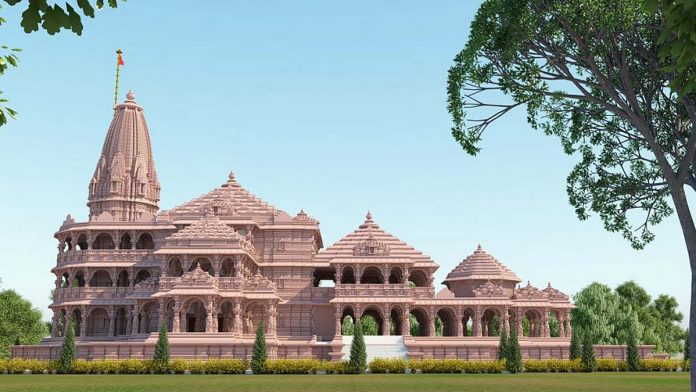 The proposed model of the Ram Janambhoomi temple in Ayodhya | Photo: ANI

"A person who takes the risk of dissemination of blasphemous messages is not entitled to get the discretion of the Court exercised in his favour."

The Lucknow Bench of the Allahabad High Court has denied the anticipatory bail plea of a man accused of trying to promote enmity between two religious communities by spreading propaganda about the foundation laying ceremony of the Ram Temple at Ayodhya.

"The fundamental right to freedom of speech and expression in a secular State is not an absolute license to injure and hurt the religious feelings and faiths and beliefs of fellow citizens," observed a Single Bench of Justice Chandra Dhari Singh.

On noting that a prima facie case is made out against the accused, Md. Nadeem, the Bench observed,

"A person who takes the risk of dissemination of blasphemous messages is not entitled to get the discretion of the Court exercised in his favour."

Nadeem, an active member of Popular Front of India (PFI), was booked by the UP Police under Section 153-A IPC for promoting enmity between different groups on grounds of religion, etc.

As per the complainant, Nadeem was propagating that since the foundation laying ceremony of Temple at Ayodhya is being done at the land of mosque, therefore, every Muslim has to come forward to protect the site of Babri Masjid.

It was further alleged in the FIR that due to this propaganda, there was a probability of communal tension between two communities and communal harmony may be disturbed and public peace may be breached.

While opposing the application for pre-arrest bail, Additional Government Advocate informed the High Court that during investigation, implicating material was found against the accused. It was argued that the accused is required for custodial interrogation to conduct a fair investigation of the offence as alleged in the FIR.

On a perusal of the FIR, the Single Judge said that a prima facie case is made out against Nadeem. It observed that the FIR reveals that the accused was spreading the propaganda as alleged and was trying to promote feeling of enmity, hatred or ill-will between the two religious communities.

"In the instant case, the comments/propaganda made by the applicant with regard to one religion or community are capable of inciting one community or group against other community. Therefore, prima facie, the offence punishable under Section 153A IPC is attracted to the facts of the case," the order stated.

Nadeem on the other hand claimed that all allegations made in the FIR are false and the same is nothing but an attempt to cover up the illegality committed by his wrongful and unauthorized detention by the police personnel.