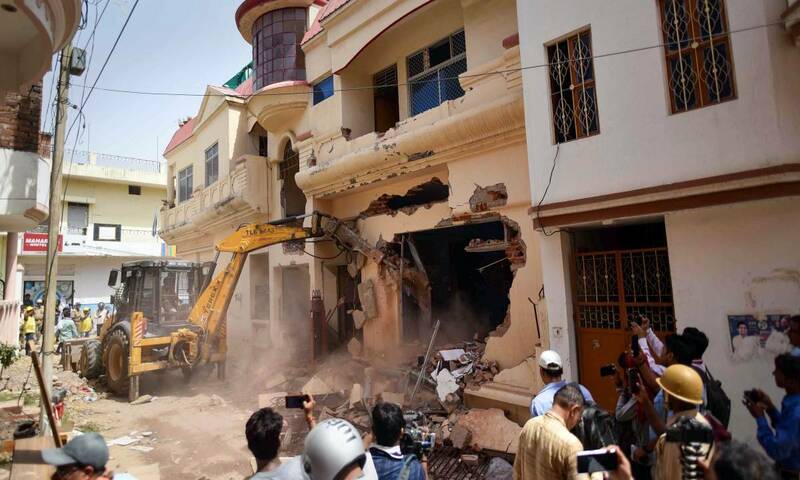 Four advocates of the Allahabad High Court have written to the Chief Justice to take cognizance of the 'illegal' demolition of the House in Prayagraj. Last evening, the Local authorities had demolished the home of Javed Mohammad, a leader of the Welfare Party of India and the father of activist Afreen Fatima.The four advocates namely: K.K. Roy, M Saeed Siddiqui, Rajvendra Singh and Prabal...

Four advocates of the Allahabad High Court have written to the Chief Justice to take cognizance of the 'illegal' demolition of the House in Prayagraj. Last evening, the Local authorities had demolished the home of Javed Mohammad, a leader of the Welfare Party of India and the father of activist Afreen Fatima.

The four advocates namely: K.K. Roy, M Saeed Siddiqui, Rajvendra Singh and Prabal Pratap have prayed that the house in question be reconstructed and compensation be provided to the wife of the activist, in whose name, the letter claims, the house was registered.

It may be noted that Javed Mohammad has been named as a key conspirator by the Uttar Pradesh police alleging that he had given a call for the Friday protest (in Prayagraj) against the controversial statements of BJP leader on the Prophet Mohammad.

He was arrested on June 10 and thereafter, his wife and daughter were also detained, however, they were released subsequently. Further, on June 11 a notice was given by the Municipal Authorities stating that the house in question shall be demolished and they should vacate the house. Consequently, yesterday, the house was demolished Completely.

In the letter plea, it has been stated that Javed Mohammad was not the owner of the house and the same was gifted to his wife Smt. Parveen Fatima by her parents before their marriage.

Further, underscoring that Javed Mohammad had no ownership over the house in question, the letter avers thus:

"Since Javed Mohammad has no ownership over the land and the building which is selected and targeted for demolition, any attempt by the District and Police Administration and the Development Authority to demolish that house will be against the basic principle of law and a grave injustice to the wife and children of Javed Mohammad."

The letter submits that to justify the act of demolition, the Prayagraj Development Authority had pasted the demolition notice on the wall of the house of Parveen Fatima only on June 11, even though no show cause notice was issued to them earlier.

The letter further contends that demolition is the last resort for the officers and before that, the U.P. Urban Planning and Development act, 1973 provides for the compounding of the illegal construction, sealing of the property and confiscation of it.

Lastly, stressing that the entire act of bulldozing the building is against the provision of the act and violative of Articles 14 and 21 of the Constitution, the letter submits thus:

"According to the Criminal Jurisprudence, criminal liability is an individual liability to the person who commits the crime and his or her family members cannot be punished for any act of violence or illegal/criminal activity by any person. That it is pertinent to mention here that the aforesaid house was constructed approximately 20 years before and in the area where it was situated mostly are constructed without any sanctioned map but the demolition of the house of Mrs. Parveen Fatima is totally illegal and a pick and choose an exercise which is unjust and arbitrary."