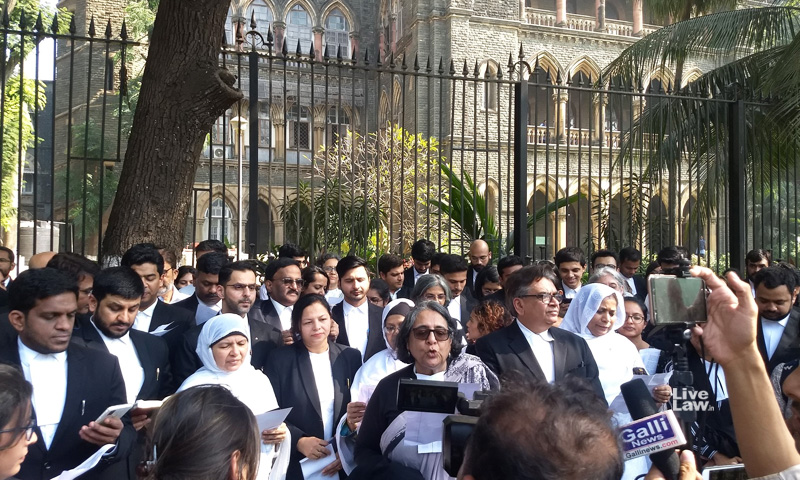 Almost a hundred lawyers gathered outside Gate Number 6 of the Bombay High Court and recited the Preamble to the Constitution of India to mark their solidarity with the protests against Citizenship Amendment Act, NRC and NPR taking place all over the country. The group was led by Senior Advocates like Navroz Seervai, Mihir Desai and Gayatri Singh.

"In light of ongoing protest and debates surrounding CAA, NRC and NPR, as lawyers we feel the need to resist all actions antithetical to the founding document of our nation and remind ourselves of our core constitutional values."

The said group also urged Advocates across Mumbai to gather and read the Preamble in their respective courts.

An article written by Professor C Rajkumar, Founding Vice Chancellor of OP Jindal Global Law University, published in the Indian Express was circulated amongst the participant lawyers. The article states-

"CAA might not pass constitutional scrutiny because of the following reasons. One, there is no intelligible differentia. The CAA identifies persons belonging to six religious communities and privileges them over other religions - especially Islam. This doesn't qualify the test of reasonable classification and the law will not pass constitutional scrutiny, having specifically left out Muslims. It is an example of discrimination - the grant of citizenship on the basis of religion was rejected by the framers of the Constitution.

Two, the classification doesn't have a rational relation to the object. The classification in the Act has been ostensibly done to provide the privilege of citizenship to those who have been affected by religious persecution. But both the selection of the countries and the inclusion of religions do not have a rational relationship with this objective. There is enough evidence to prove that there are people practising other religions, who suffer from religious persecution in these three countries as well as in other countries in South Asia.

Three, arbitrariness is antithetical to equality. Article 14 of the Constitution provides for "equality before law or equal protection of the laws within the territory of India". The Supreme Court has emphasised the importance of non-arbitrariness to pass the test of equality. In this case, the selection of the countries, the identification of the religions and more importantly the selective exclusion of Muslims, is a clear violation of Article 14."

As reported earlier, lawyers of the Supreme Court also gathered in the lawns and read out the Preamble to the Constitution.