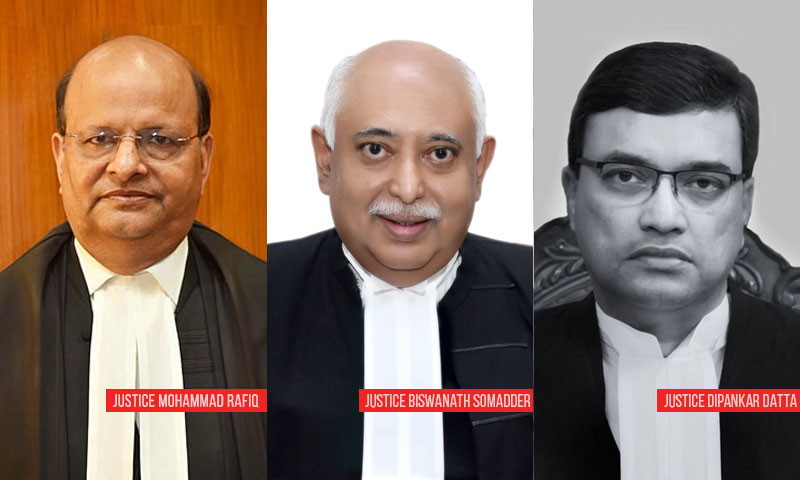 Justice Datta is the second-senior most judge at the Calcutta High Court. He enrolled as an Advocate at the Bar Council of West Bengal in 1989 after obtaining his degree in law from the Calcutta University.

He practiced mainly in Constitutional and Civil matters and was appointed as a counsel for the Union of India in 1998. Between the May, 2002 and January, 2004, he worked as a Junior Standing Counsel for the State of West Bengal. He also appeared for a number of educational authorities and institutions including the University of Calcutta, W.B. School Service Commission and W.B. Board of Secondary Education.

He was elevated to the Bench of the High Court at Calcutta as a permanent Judge on June 22, 2006.

Justice Somadder enrolled as an Advocate at the Bar Council of West Bengal in 1989 after obtaining his degree in law from the Calcutta University.

He practiced mainly in Constitutional (Customs & Central Excise, FERA, Telecommunication, Education, Service & Income Tax), Arbitration, Company, Revenue, Civil and Criminal matters. Specialised in Revenue, Arbitration and Constitutional Laws. He was a Senior Counsel for the Central Government in the Calcutta High Court and was also the Hony. Joint Secretary of the Bar Library Club of Calcutta High Court.

From January 1, 2019 till April 3, 2019, he worked as an Acting Chief Justice of the Calcutta High Court and was subsequently transferred as a Judge of the Allahabad High Court on October 17, 2019.

Justice Rafiq enrolled as an Advocate at the Bar Council of Rajasthan in 1984 after obtaining his degree in law from the Rajasthan University.

He worked as an Assistant Government Advocate for the State of Rajasthan from July 15th 1986 to December 21st 1987 and Deputy Government Advocate from December 22nd 1987 to June 29th 1990. He also represented the Union of India as Standing Counsel from 1992 to 2001 before the High Court. He was appointed as an Additional Advocate General for the State of Rajasthan on January 7th 1999 and worked as such till his elevation to the Bench of the Rajasthan High Court in May, 2006.

At Rajasthan High Court, he functioned as an Acting Chief Justice twice on April 7th 2019 upto May 4th 2019 and on September 23rd 2019 to October 5th 2019. He also worked as an Executive Chairman of the Rajasthan State Legal Services Authority and Administrative Judge.

On November 13, 2019, he was appointed as the Chief Justice of the Meghalaya High Court.