COVID Management Amid WB Polls- "No Institution Of Governance Can Excuse Itself From Obeying Election Commission's Orders": Calcutta High Court 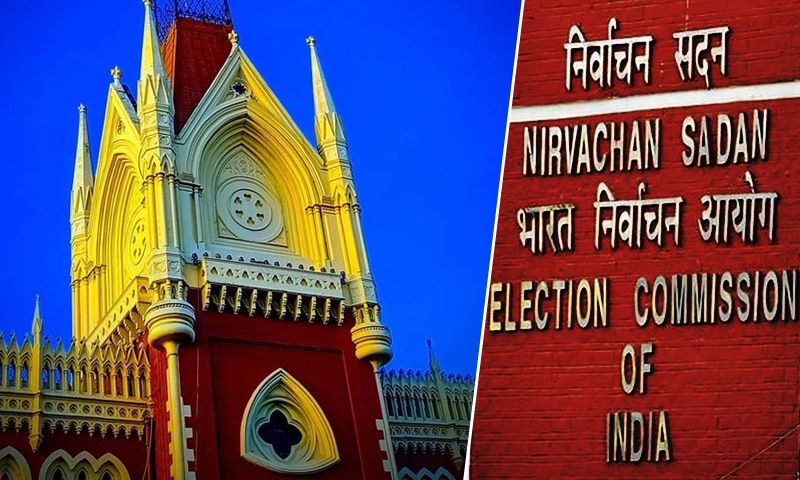 After facing censure from the Calcutta High Court over its handling of the elections in West-Bengal amid the COVID crisis, the HC today remarked that no department or institution of governance could excuse itself from obeying the commands of the Election Commission of India. The Bench of Chief Justice Thottathil B. Radhakrishnan and Justice Arijit Banerjee remarked, "Any...

After facing censure from the Calcutta High Court over its handling of the elections in West-Bengal amid the COVID crisis, the HC today remarked that no department or institution of governance could excuse itself from obeying the commands of the Election Commission of India.

The Bench of Chief Justice Thottathil B. Radhakrishnan and Justice Arijit Banerjee remarked,

"Any restrictive governance imposed by the Election Commission of India as regards public behavior as regards the protective protocol in relation to Covid management shall be strictly followed and abided by the people."

Following the Court's directions, the Election Commission of India had filed a short affidavit reflecting measures and actions taken regarding COVID management amid West Bengal Polls.

Having perused the Affidavit, the Court observed that Article 324 (6) of the Constitution of India provides ample constitutional authority for the Election Commission of India to require the availability of such officers from different zones and for different purposes as may be required in matters in connection with elections.

Further, the Court noted that such requests have to be answered by the President or the Governor, as the case may be.

The Court expressed its hope that the Election Commission of India would steer its way forward in the proper direction and that the action taken by the ECI (as reported in the Commission's affidavit) would further push forward requisite action to obtain obedience to its direction.

"It will be within the jurisdiction of the competent authorities to enforce that masking, social distancing, etc. as required by the Covid protocol, are strictly adhered to and enforced in the State of West Bengal."

The matter has now been posted for further hearing on 26th April.

During the course of last hearing, the Court had expressly observed that it was not satisfied with the materials on record to state that the Election Commission of India and its officers on the ground in West Bengal have enforced their circulars.

"We are sure that circulars are not merely advisories to be wrapped up by the political parties or those involved in the political propaganda or even the public at large."

Recently, the Calcutta High Court had asked Chief Election Commission and the Chief Electoral Officer to utilize such Government officials and police force as may be necessary to ensure strict compliance with COVID-19 Protocols & guidelines.

The Bench of Chief Justice Thottathil B. Radhakrishnan and Justice Arijit Banerjee observed this after perusing a report by the Chief Electoral Officer, West Bengal with regard to the measures taken for implementation of the COVID-19 guidelines during polls.

Earlier this month, the Calcutta High Court had issued directions to the District Magistrate of all districts and Chief Election Officer, West Bengal, to ensure that COVID guidelines for conducting elections are implemented in a strict manner in the wake of rising COVID-19 cases in the State.

Noting that the guidelines issued by the Election Commission of India and Chief Electoral Officer, West Bengal, "need to be implemented in the strictest manner possible", the Court has directed the Administration to ensure the same.

Further, the Court had directed that stringent measures must be taken "against persons who fail, neglect or refuse to obey the COVID protocols".

"Callous, irresponsible and nonchalant attitude or the behavior of some of the members of the society cannot be permitted to endanger the lives of the other members of the society", observed the Order while stating that if any person, whether engaged in election campaigning or otherwise, was found flouting COVID protocols, "such a person must be taken to task immediately".