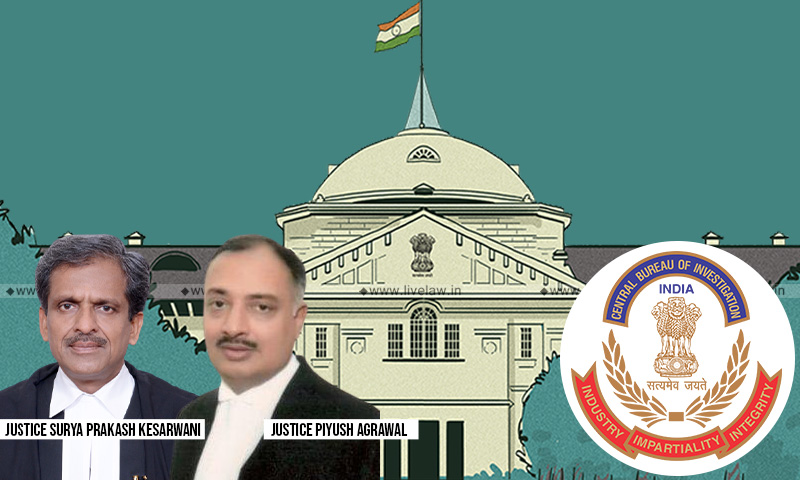 The Allahabad High Court on Wednesday transferred a probe into the alleged custodial death of a 24-year-old man to the Central Bureau of Investigation (CBI) as it prima facie found that officers of the I.P.S. rank have some involvement in the murder/death of the deceased. The Bench of Justice Surya Prakash Kesarwani and Justice Piyush Agrawal transferred the probe while underscoring...

The Allahabad High Court on Wednesday transferred a probe into the alleged custodial death of a 24-year-old man to the Central Bureau of Investigation (CBI) as it prima facie found that officers of the I.P.S. rank have some involvement in the murder/death of the deceased.

The Bench of Justice Surya Prakash Kesarwani and Justice Piyush Agrawal transferred the probe while underscoring that if the investigation is neither effective nor purposeful nor objective nor fair, the courts may, if considered necessary, order fair investigation, further investigation or reinvestigation as the case may be to discover the truth so as to prevent miscarriage of justice.

The matter related to the alleged custodial death of a young boy aged about 24 years, who was forcibly taken away from his house to the police station by the Police party, allegedly, with an intent to implicate him falsely and thereafter, detained him at the police station.

Thereafter, when the policemen brought the deceased with them, he was not even able to stand and was loudly crying and calling out her mother to save him otherwise the police would kill him.

The allegations are also that the policemen forcibly entered his house and after breaking lock of the box took away Rs.60,000/- and other articles and used filthy language against the family members of the deceased.

When the informant (brother of the deceased) went to the police station, he was not allowed to meet with his brother (deceased), and in the morning, the information was received that his brother died in police custody as he was murdered by the policemen.

On the other hand, the police claimed that the deceased was apprehended while he was driving a motorcycle which fell, due to which he received injuries and the public beat him up.

It was further stated that when he was sent for first aid along with a Sub Inspector and two constables, the Doctor at the CHC referred him for treatment to District Hospital, Jaunpur, and by the time they reached the District Hospital, he had died.

Due to custodial death, a judicial inquiry was entrusted in the matter to the Chief Judicial Magistrate, Jaunpur, and it recorded the statements of 16 witnesses, however, it didn't reach any conclusion.

Noting that there were contradictions in the statements given by the police officials before the Judicial enquiry and statement submitted in the court, the court observed concluded that the police story and G.D. entries are prima facie false and a criminal act to divert investigation in a wrong direction by manipulating evidences so as to defeat the rule of law and fair investigation.

Thereafter, the court also underscored that prima facie, the post mortem report was also manipulated or procured under undue influence, as it did not contain the injuries present on the vital part of the body of the deceased which was otherwise visible in the undisputed photographs filed before the court.

Importantly, the Court observed that as per the alleged Hospital slip, the deceased was brought dead by the Police at District Hospital Jaunpur at about 3:35 A.M. on February 12, 2021, whereas, the Court further noted, the Superintendent of Police Jaunpur and the District Magistrate Jaunpur had told NHRC, Delhi, and the District Judge Jaunpur that the deceased had died during treatment at 03:35 P.M. at District Hospital, Jaunpur.

In view of these facts, the court came to the following conclusion:

"…entire effort of the police is to somehow give clean chit to the accused and for this purpose important evidences are being left and some pieces of evidence are being created and manipulated. But presently we do not want to comment any more since fair investigation is yet to be carried by an independent and impartial Agency."

"Ultimately, whether the accused policemen have committed offence of murder and other offences and whether the then Superintendent of Police, Jaunpur and Circle Officer, Jaunpur were influencing the investigation and are creating false pieces of evidence, are matters of investigation."

Consequently, transferring the probe to the CBI, the Court posted the matter as fresh for further hearing on September 20.

Lastly, noting that Fair and proper investigation is the primary duty of the investigating officer & "a speedy trial" is the essence of companion in concept in "fair trial", the Court concluded thus:

"In every civilized society, the police force is invested with powers of investigation of a crime to secure punishment for the criminal and it is in the interest of society that the investigating agency must act honestly and fairly and not resort to fabricating false evidence or creating false clues only with a view to secure conviction because such acts shake the confidence of the common man not only in the investigating agency but in the ultimate analysis in the system of dispensation of criminal justice."