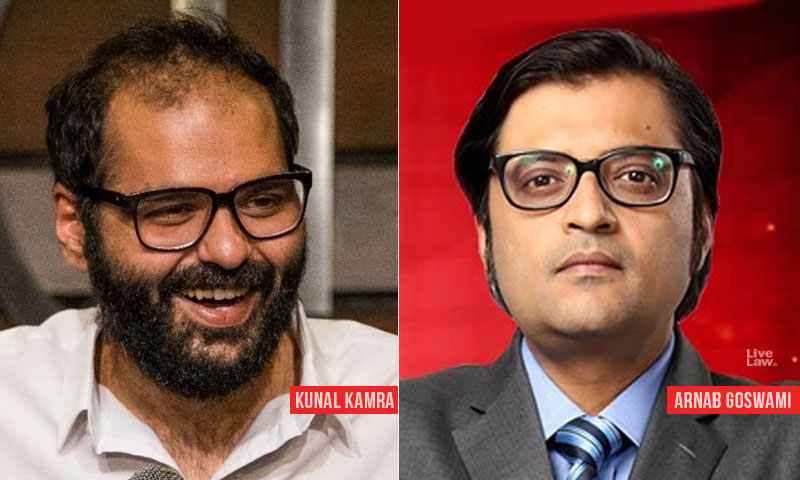 The Single Bench of Justice Navin Chawla has also provided liberty to Kamra to implead Air India, Spice Jet and Go Air, as parties to his petition.

Appearing for Kamra, Senior Counsel Vivek Tankha submitted before the court that multiple airlines had put flying ban on the Petitioner even prior to filing of the complaint. He said:

'Kunal Kamra got punished even before enquiry could be initiated. No complaint was even filed by the pilot in command.'

Mr Tankha read out tweets posted by airlines such as Air India, Spice Jet and Go Air, to point out how multiple airlines put an indefinite flying ban on Kamra without any complaint or enquiry.

'This is against the Aircraft Rules which lays down a complete procedure to deal with unruly behaviour in the form of Civil Aviation Regulations', he argued.

Further, it was also submitted by Mr Tankha that under Rules 113A and 161 of Aircraft Rules, DGCA is empowered to impose a penalty on airlines that violate Civil Aviation Regulations (CAR). He argued:

'Instead of punishing these airlines, DGCA has endorsed their behaviour.'

These arguments were countered by ASG Maninder Acharya who was appearing for the DGCA.

She argued that the present petition is not maintainable as DGCA is not empowered to take any action which is beyond the procedure defined in CAR.

She informed the court that it is the Indigo airlines which has banned the Petitioner, and not the Union of India.

Further, she submitted that the DGCA is not empowered to take any coercive action when the matter is already pending before the Internal Committee of the concerned airlines.

At this point, the court confronted ASG Acharya about the statement and tweet posted by DGCA on this issue. He rapped the civil aviation regulator by saying:

'How come DGCA gave a certificate of endorsement to the action taken by other airlines? How do you expect the Petitioner to challenge the flying ban when you have already given a clean chit to the concerned airlines.'

He further went on to say:

'How can you say that you can't take any action when someone approaches you with a complaint. If I record that statement, it will prejudice you in other cases.'

At this point, ASG Acharya informed the court that she would seek fresh instructions on DGCA's stance on other airlines before making further submissions.

The court granted her time till Thursday to make her further submissions.

Moreover, the court did not provide any interim relief to Kamra as he did not mention the same in the prayer of his petition.

It was also made clear that this stage the court cannot issue any order as the concerned airlines have not been made parties to the present petition. Moreover, the court would not interfere with the proceedings that are already continuing before the Internal Committee of Indigo Airlines.

The matter will now be taken up on February 27.

IndiGo had suspended stand-up comedian from flying with it, after he heckled journalist Arnab Goswami aboard one of its planes from Mumbai to Lucknow.

The Petition was filed through the Law Firm Lawmen & White.