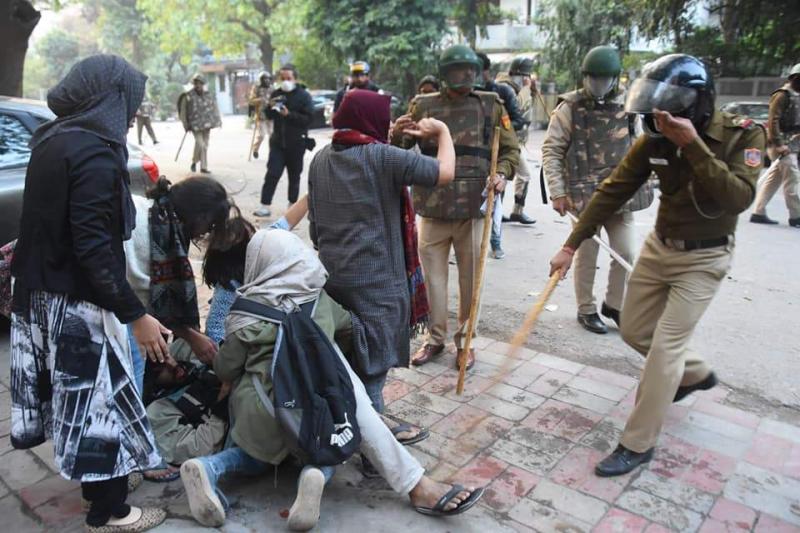 Delhi High Court has denied interim protection from coercive action to Jamia students against whom FIRs have been lodged by the Delhi Police.Interim protection from coercive action was sought as one of the interim reliefs by multiple petitions that have demanded a judicial enquiry against the alleged acts of violence committed by Delhi Police against the students of Jamia Millia...

Delhi High Court has denied interim protection from coercive action to Jamia students against whom FIRs have been lodged by the Delhi Police.

Interim protection from coercive action was sought as one of the interim reliefs by multiple petitions that have demanded a judicial enquiry against the alleged acts of violence committed by Delhi Police against the students of Jamia Millia Islamia University.
The Division Bench of Chief Justice DN Patel and Justice Hari Shankar also issued notice to the Central Government, Delhi Government and Delhi Police, to file their replies to the present pleas. The court also asked Senior Counsel Colin Gonsalves to file affidavits mentioning the details of certain individual cases that he narrated before the court today.
All the Petitioners have sought the following common demands from the court:
Constitution of an independent judicial inquiry headed by a retired Supreme Court or a High Court judge, to investigate into the matter.
Immediate medical assistance to be provided to all the students who have sustained injuries
Interim protection to students from any coercive action to be taken by the police.
Appearing for one of the Petitioners named Rizwan, Senior Counsel Vinay Garg submitted before the court that as per a report from AIIMS, one student has lost his vision due to the injury sustained during the police violence.
He also asked for an independent judicial inquiry into the incident, as this is the first time since 2012, that more than 400 tear gas cannons have been fired by the police. Further, no medical assistance has been provided to 52 students who have been seriously injured.
Appearing for one of the Petitioners, Senior Counsel Sanjay Hegde argued that the issue before the court is to decide as to whether the use of force inside the campus was called for, whether police was allowed to use the force, and what justified the use of force.
Hegde further argued that the court shall direct the police to not to take any action within the campus without giving prior intimation to the University authorities.
After Hegde, Ms Indira Jaising came forward to argue for the Petitioners. She started off by saying:
'Students and police are pitted against each other. Lawyers can protect themselves, but how do can we expect a vulnerable and traumatized student community to protect itself, to even exercise its rights against police brutality'.
While highlighting the unduly and unregulated arrest of students, Jaising demanded an immediate lodging of the FIR against the concerned police officers. Citing the Ramlila Maidan judgment, she argued:
'Delegated powers of the state should be exercised with great caution. Present case involves brutality and use of disproportionate force. Our case is, police didn't act within the framework of law.'
Jaising also asked the court to pass the same order that it had passed in the Tis Hazari clash matter. Arguing for no coercive action against the students, Jaising said:
'In our country, process is the punishment'.
Highlighting the need for having an independent judicial enquiry into the case, Jaising remarked that:
'We would like the peace to be restored. Peace requires confidence building measures, which should come from the state. They should demonstrate confidence instead of quelling protest.'
After Jaising, Senior Counsel Colin Gonsalves appeared for another Petitioner seeking similar reliefs. He commenced his arguments by highlighting that the students cannot be rioting as they were attacked by the police when they were returning from their march to the Parliament. He went on to say that this is the most significant attack on the minority students in the country.
Gonsalves also produced certain images and videos before the court to suggest that this material is serious enough to warrant an immediate inquiry into the matter. He also claimed that students were attacked in library, toilets and even a mosque.
Further, he also asked for the preservation of the CCTV footage, which can be produced as a evidence before the judicial inquiry. He said:
'As the authorities are trying to tidy up the situation, we demand an immediate high level inquiry'.
After Gonsalves, Senior Counsel Hariharan submitted his arguments. He said that there's need to inquire as to which police stations were involved in the process, and who are the officers who entered the University.
After all the counsels appearing for the Petitioners concluded their arguments, the court issued notice to the Respondents to file their replies and adjourned the matter for February 4.
As the bench rose and began to walk towards its chambers, certain people present in the court started shouting, 'Shame! Shame! Justice has been denied!'
TagsJamia Violence #Delhi HC #Protection From Arrest CAA Protest Jamia Milia Police Violence
Next Story
Similar Posts
+ View more
Law Firms
+ More