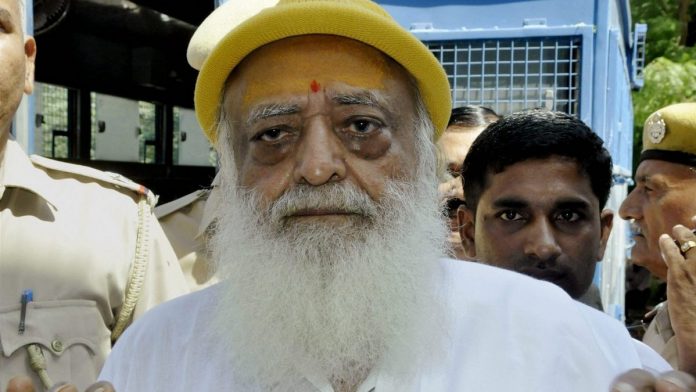 The Delhi High Court on Tuesday reserved its judgment on the appeal filed Harper Collins Publishers against the order of a Delhi civil court which restrained the publication of the book "Gunning for the Godman: The True Story Behind Asaram Bapu's Conviction".A single bench of Justice Najmi Waziri reserved the order after hearing Senior Advocate Kapil Sibal for the publisher and...

The Delhi High Court on Tuesday reserved its judgment on the appeal filed Harper Collins Publishers against the order of a Delhi civil court which restrained the publication of the book "Gunning for the Godman: The True Story Behind Asaram Bapu's Conviction".

A single bench of Justice Najmi Waziri reserved the order after hearing Senior Advocate Kapil Sibal for the publisher and Senior Advocate Devadatt Kamat for the respondent Sanchita Gupta for over an hour. The order will be dictated in court tomorrow at the post-lunch session.

During the course of the hearing, Justice Waziri orally remarked that the stay order was "pre-mature" and indicated that he might vacate the stay and remit the matter to the trial court for fresh consideration of the issues raised by both the parties

Senior Advocate Kapil Sibal, appearing for Harper Collins, submitted that while passing the impugned order, the trial court fell into "serious error" in not considering the settled principles of law against pre-publication censorship which is unconstitutional as it is against the right to freedom of expression under Article 19 (1) (a) of the Constitution of India.

He submitted that the law on ex-parte injunction against publication is that the plaintiff has to show utmost good faith. However, in the instant case, the plaintiff did not approach the court with clean hands, as the judgment of the trial court that convicted and sentenced her was not appended along with the plaint.

"What the Respondent/Plaintiff claims to be Defamatory, are observations made by the Court. They have suppressed material facts by not annexing the Judgment. On this ground alone, the application should be dismissed", Sibal argued. He further pointed out that the High Court has only suspended the sentence and that the conviction is still in operation.

Sibal further submitted that the plaintiff approached the court on the last minute, just a day before the scheduled publication even though the publication was announced in media in the last week of July, and this factor should be held against them.

Senior Advocate Devadatt Kamat(assisted by Advocates Rajesh Inamdar, Naman Joshi and Karan Khanuja), appearing for the respondent/plaintiff, submitted that the matter was still sub-judice, and the publication of the book can cause prejudice to the appeal and tarnish her reputation.

"If tomorrow the Special Court Judgment is reversed by the HC, the book, standing with all its disclaimers, will be available in market. This will tarnish the reputation of Respondent/Plaintiff forever", Kamat submitted.

Kamat further submitted that the publisher should approach the trial court first, seeking vacation of the interim order by filing an application under Order 39 Rule 4 of the Code of Civil Procedure.

When Kamat submitted that the book has dramatized the events, Justice Waziri orally remarked, "There has to be some license for the writer to write in a particular way. It cannot be drab like recording evidence".

Kamat also referred to the order passed by the High Court against the movie 'Batla Hosue'. Justice Waziri replied that the said order was passed not on contest but after the film-makers voluntarily agreed to make changes.

Kamat next referred to an order passed against the publication of a documentary on Nirbhaya case. Justice Waziri replied that it was passed after the Delhi police took the stand that the publication could affect the trial, which was pending then.

Kamat also referred to the pre-publication restraint passed against Juggernaut from publishing a book on Baba Ramdev.

At this juncture, Sibal, saying that he had appeared in the Ramdev case, submitted that it was not a case of conviction and that it was passed after the court found that there were some misstatements made against him.

Sibal said that if the argument of the respondent is accepted, it would mean that even a judgment cannot be published or discussed.

While reserving the judgment, the judge deleted Amazon India and Flipkart from the party array, after their lawyers submitted that they were not necessary parties and undertook to abide by any orders passed by the Court.

The book, alleged to be a true story of the facts surrounding the conviction of self-styled godman Aasaram Bapu was authored by Ajay Lamba, Additional Commissioner of Police, Jaipur and Sanjiv Mathur. It was scheduled to be released last Saturday.

However, the District Court at Patiala House, New Dehli on Friday, passed an ex-parte order to restrain the publication of the book, in a civil suit filed by Sanchita Gupta (Respondent No.1/Plaintiff), who was convicted by a court in Jodhpur under POCSO Act in 2018 as an aid of Asaram Bapu in a case related to the rape of a minor girl.

Gupta filed the suit through advocates Naman Joshi and Karan Khanuja contending that the online portal 'Scroll' had published a chapter of the book, which was defamatory and was likely to prejudice her appeal pending in the High Court of Rajasthan against the conviction.

The Company, in the appeal filed before the High Court through Obhan & Associates, contended that the Impugned Order is "grossly premature" and has been obtained by "gross suppression and concealment of facts". It has submitted,

The publisher argued out that the material to be published in the Book which is alleged to be defamatory of the Respondent No.1/Plaintiff is already in the public domain and subject to wide reporting, discussion and debate, including in the news reports and video coverage of her role in the Asaram case.

The Company has submitted that the 2018 Judgment whereby the Respondent No. 1/ Plaintiff was convicted, clearly refers to the "conspiracy" hatched by her and Asaram. It is alleged that the Judgment clearly records that she used to scare the victim and her family with stories of evil spirits and asked them to take the victim to Asaram.

It is also contended that publication of the book shall not prejudice the ongoing judicial proceeding before the Rajasthan High Court inasmuch as the 2018 conviction Judgment against and various media reports leave no room for doubt that she is publicly known to have been convicted in the Asaram case.

"In concealing these documents and facts, the Respondent No.1/Plaintiff has mislead the Ld. Trial Court into believing that she has a reputation in society which is deserving of protection or which has been damaged by the publication of the Book," the plea states.