"Little Amazed At The Resistance Of The University": Delhi HC Sets Aside Order Of JNU Rejecting Grant Of EOL To Professor For His Fellowship, Imposes 20K Cost [Read Order] 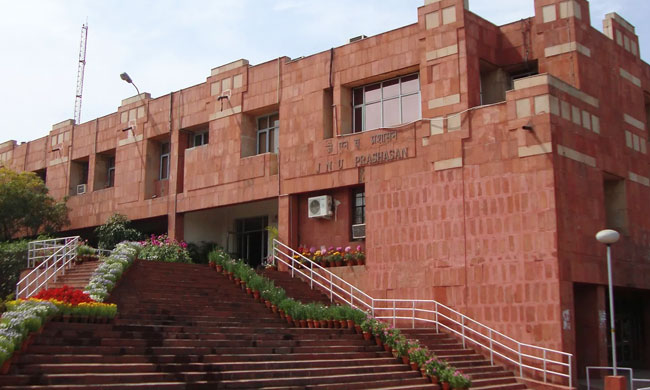 The Delhi High Court has set aside an order of rejection of the Executive Council of JNU rejecting grant of Extra-Ordinary Leave (EOL) to a professor for pursuing fellowship as arbitrary and against the provisions of the Ordinance of the University and contravening the Wednesbury's Principles of reasonableness and fairness.

An application for EOL (without pay) was filed by Udaya Kumar, a professor in the Center for English Studies, School of Language Literature and Culture Studies at Jawaharlal Nehru University for a period of 9 months to pursue fellowship at the prestigious Nantes Institute of Advanced Study, France.

The petitioner submitted that his application was rejected by the Executive Council of JNU in an arbitrary manner in a non-speaking and unreasoned order and that such action of the University was mala-fide and had its genesis in an earlier litigation Kavita Singh & Ors. v. JNU & Ors., to which the petitioner was a party, where he had moved the Court against his removal from his position along with seven others for raising pertinent questions with respect to the academic and administrative functioning of the University.

The Bench comprising of Justice Jyoti Singh noted that the sole reason relied upon by the University for denial of grant of EOL to the Professor was that as per the Ordinance Relating to Conditions of Service of Appointed Teachers of the University of 2016 which as per the University, was applicable to the case, there is a 20% ceiling on the number of faculty members, who can be granted leave at a time and the same would be defeated if the petitioner was granted EOL.

The Counsel for petitioner opposed the applicability of the 2016 Ordinance and contended that the amended 2018 Ordinance, which is a later Ordinance, shall apply to his application as per which there is no ceiling on the number of faculty members for grant of leave.

The Court ruling in favour of the Petitioner, stated its reasons as

It is true that in 2018 Ordinance cap of 20% is absent, however, in my view even if the 2016 Ordinance applies and the cap is applicable, the defence of the Respondent has no merit. This is for the simple reason that the data filled in Annexure-II, extracted above, reflects the stand of the University itself that the case of the Petitioner was within the ceiling limit. Secondly and significantly, as per the Ordinance, at no time more than 20% of the strength of the teachers on the rolls of a Centre shall be allowed to be absent on Extra Ordinary Leave, Study Leave and/or Sabbatical Leave. In the present case, one of the faculty members, namely, Professor Makarnad Paranjape is not on leave, but is on deputation. Even otherwise, mathematically calculated, if one of the faculty members on strength of 8 is not available, the ceiling of 20% is not crossed as 20% of 8 is 1.6, which is more than one.

The Court also found merit in the contention of the petitioner that both the Dean of the School and the Chairperson of the Center, who are the persons best placed to know the Semester-wise requirements of a teacher, have recommended his application for EOL for a period of nine months starting from 01.10.2020 to 30.06.2021 which suggests that there is no urgent need of the Petitioner at the University owing to which he cannot be spared for a period of 10 months.

Moreover, the Court condemned the arbitrary action of the University and expressed amazement at it in the following words

I must express here that the Court is a little amazed at the resistance of the University to grant EOL to the Petitioner for his Fellowship. There is no gainsaying that the Petitioner herein is not going on leave for any self-service or self-employment. He is only going to acquire higher qualifications and in my view, it is a matter of great prestige also for the University that one of its Professors has been offered a Fellowship at a prestigious Institute for Advanced Study in France. The Court also cannot overlook the fact that ever since the Petitioner has joined Respondent University he has not availed a single day of EOL and has continued to serve the Respondent.

The Court thus ordered JNU to sanction the leave of the Professor within 3 days from the date of the order so as to enable the Petitioner to complete all formalities and modalities before he travels as the Fellowship is to begin from 1st October, 2020. The Court also imposed a cost of Rs. 20,000/- on the University awarded in favour of the Petitioner noting that he was constrained to file the petition due to the illegal and arbitrary rejection of his request for EOL by the University.