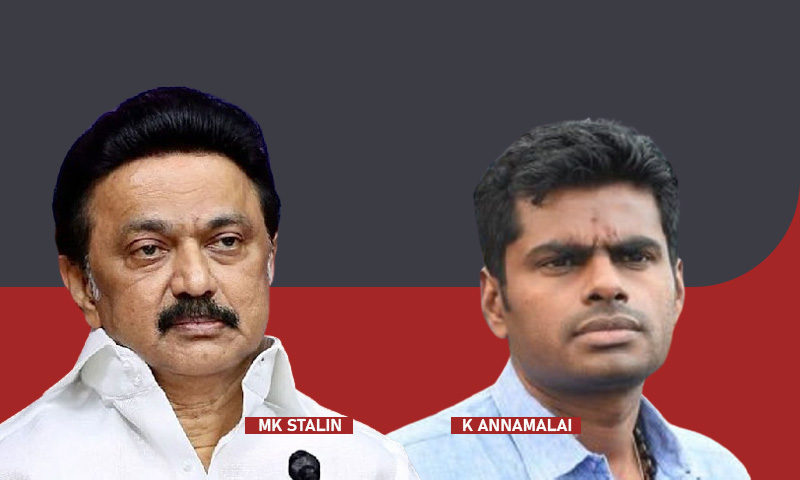 x
K. Annamalai, who is also a former IPS Officer has been accused of making allegedly baseless statements about the CM attending Dubai Expo 2022.

A legal notice has been issued on behalf of R S Bharathi, Organising Secretary of DMK, seeking 100 crores in damages from K. Annamalai, Tamil Nadu BJP State President.The notice states that the money should be paid to the Chief Minister of Tamil Nadu's Relief Fund within two days from the date of receipt of the legal notice.The notice filed through Senior Counsel P. Wilson alleges that the...

The notice states that the money should be paid to the Chief Minister of Tamil Nadu's Relief Fund within two days from the date of receipt of the legal notice.

The notice filed through Senior Counsel P. Wilson alleges that the BJP President has made scandolous and defamatory remaks on two occassions against DMK Party President and State Chief Minister M.K Stalin.

DMK has also demanded an unconditional public apology to the Chief Minister within 24 hours failing which legal recourse including civil and criminal proceedings will be taken. The notice has also called upon Annamalai to cease and desist from making further defamatory comments against the Chief Minister.

R S Bharathi has further mentioned in the notice that the remarks made by Annamalai attracts Sections 499 and 500 of IPC. He has also added that the State President will be prosecuted under Section 199 of Cr.P.C if he does not comply with the demands, since the defamatory statements were made against the CM in the discharge of his public duties.

Responding to the notice, K. Annamalai noted in Twitter yesterday as below:

I was given to understand DMK Party has issued a defamation Notice for ₹100 Cr on me.

DMK's first family treats a mere commoner like me to be equivalent to a 'Dubai family like them'.

I have full faith in our Judiciary. Will face all your threats in court.
My fight is for TN.

K. Annamalai, who is also a former IPS Officer has been accused of making basless statements about the Chief Minister's visit to attend Dubai Expo 2022. According to DMK, though the CM travelled to Dubai to attract foreign investment by meeting with industrialists in the Expo, Annamalai publically stated during a protest at Nungambakkam that 'all foreign investments will only be for the benefit of the Chief Minister and his family'.

Pointing out these two instances, the legal notice states that the BJP State President has made wild and false accusations that has tarnished the 'social, political and personal' reputation of the CM. The Legal notice also refutes a statement allegedly made by Annamalai to the effect that CM's family function is happening in Dubai.

The notice also adds that the Media has extensively documented the Chief Minister's meeting with top leaders and industrialists who expressed interest to invest in Tamil Nadu. Citing the same, DMK says that the allegations against the CM are meant to 'cause a dent to his reputation and gain cheap publicity'.

"Our client states that quite ironically, you are the State President of Bharatiya Janta Party, yet you do not have the slightest idea of political, social or economical climate in Tamil Nadu, India and around the world. Our client states that you have made these statements as a cheap publicity stunt and nothing more, with a view to gain political mileage at the expense of the reputation and image of the DMK President/Hon'ble Chief Minister Mr MK Stalin", the notice adds while accusing Annamalai of trying to sabotage foreign investments by making 'anti-national' and 'seditious' statements.