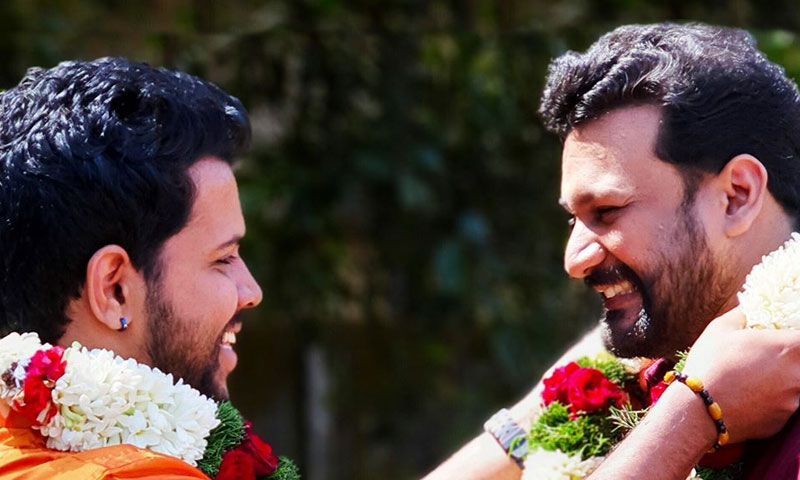 Nikesh and Sonu, the first 'married' gay couple from Kerala, have moved the High Court of Kerala challenging the provisions of Special Marriage Act 1954 to the extent they do not permit the registration of homosexual marriages.Justice Anu Sivaraman on Monday admitted the writ petition filed by them and issued notices to the governments of Centre and Kerala.As per the...

Nikesh and Sonu, the first 'married' gay couple from Kerala, have moved the High Court of Kerala challenging the provisions of Special Marriage Act 1954 to the extent they do not permit the registration of homosexual marriages.

Justice Anu Sivaraman on Monday admitted the writ petition filed by them and issued notices to the governments of Centre and Kerala.

As per the petitioners, non-recognition of same-sex marriage violates the principles of equality, non-arbitrariness, non-discrimination, individual dignity and personal autonomy under Articles 14, 15(1), 19(1)(a) and 21 of the Constitution of India.

The petitioners state that they had met in May 2018 and had fallen in love with each other. Following their romantic relationship, they decided to get married. Fearing societal backlash, they had a "secret ceremony" in a temple to solemnize marriage in satisfaction of their "conscience and beliefs".

Since the petitioners knew that the religious authorities will not issue a certificate of marriage, they decided to opt for the route of secular marriage under Special Marriage Act 1954.  Then they realized that the law does not recognize homosexual marriages.

"Though the text of the Act does not exclude homosexual unions from its ambit expressly, Section 4 and Schedules 2-4 to the Act carry a heterosexual undertone in its language as it shows marriage as an affair between a male and a female or between bride and bridegroom", the petitioners stated.

These decisions would be meaningless and incomplete unless the sexual minorities are afforded equal access to the institution of marriage to enable them to profess love in the way they deem fit.

Any law that fails in its duty to protect one's self determination of sexual identity and treat that identity with dignity disrespects individual choice and is therefore irrational and manifestly arbitrary, violating Article 14 of the Constitution of India, the plea stated.

It is contended that the exclusion of homosexual union from the Special Marriage Act is based on "irrational and discriminatory stereotype gender roles assigned by the society to man and woman" and thus cannot pass the test of non-discrimination imposed by Article 15(1) of the Constitution.

It is further argued that the refusal of law to recognize and accept homosexual marital unions is a violation of their right to freedom of expression guaranteed to them by the Constitution of India under Article 19(1)(a).

"Expression of love, growth of one's personality within a relationship and development of an identity of union will be incomplete if the law refuses to recognize same sex marriages and thereby it affects the Article 19(1) rights of the petitioners guaranteed by Article 19(1)(a) of the Constitution of India", the petitioners stated.

"The impugned provisions vitiate constitutional morality and try to fixate the majoritarian morality on the LGBTQI persons who form a minority. This is impermissible and unconstitutional", they argued.

"The impugned provisions of the Act of 1954 are regressive and outdated as they remain closed and opaque to sexual minorities and recognize marital unions as a composite of only heterosexuals. These provisions kill the idea of transformative constitutionalism" , they further argued.

The petition refers to the 2015 decision of the Supreme Court of The United States of America which declared that homosexual couples have right to get married under law.

The petitioners seek the relief that the impugned provisions of the Special Marriage Act, 1954 to the extent they prevent equal access to the institution of marriage for homosexual couples should be declared unconstitutional and struck down to that extent.

They also seek a declaration that they are entitled to solemnize and register their union under the Special Marriage Act.