[Personal Details Of 4474 RTI Applicant On MIB Site] If Such Large Scale Breaches Are Not Taken Seriously, RTI Itself Will be Trivialized; Bombay HC In Saket Gokhale Case 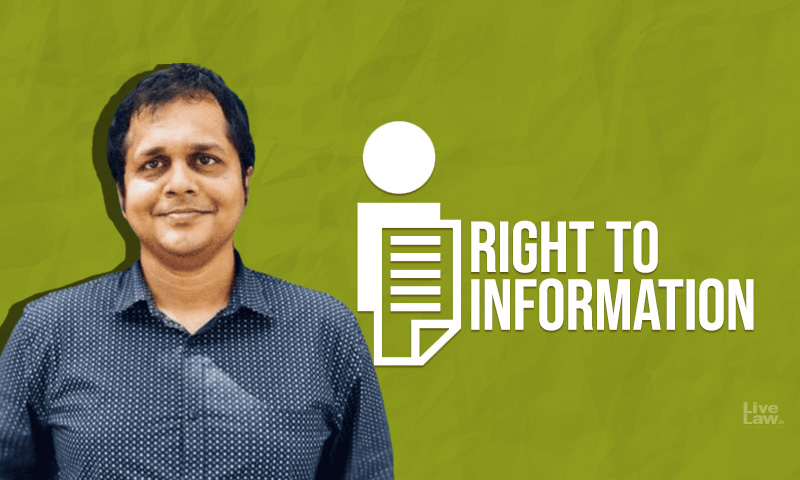 The Bombay High Court on Thursday instituted an inquiry by the Secretary of Information and Broadcasting Ministry on the issue of personal details of 4474 RTI applicants being uploaded on the official website of the ministry leading to a massive breach. Court observed that if such large scale breaches in the field of Right To Information are not taken seriously, then the right itself will...

The Bombay High Court on Thursday instituted an inquiry by the Secretary of Information and Broadcasting Ministry on the issue of personal details of 4474 RTI applicants being uploaded on the official website of the ministry leading to a massive breach. Court observed that if such large scale breaches in the field of Right To Information are not taken seriously, then the right itself will be trivialized.

Division bench of Justice Nitin Jamdar and Justice Milind Jadhav were hearing a writ petition filed by former journalist and RTI activist Saket Gokhale. The bench noted that suitable action must be taken, and also seen to be taken, to underscore the importance of the RTI Act of 2005. Court imposed a cost of Rs.25,000 towards litigation expenses on the Ministry.

According to Gokhale, his personal details like address and phone number were uploaded on the website leading to severe harassment as he had instituted court proceedings on sensitive issues and started receiving threatening phone calls, messages etc. A mob gathered outside his house raising slogans. Petitioner realized that due to website link of the Ministry of Information and Broadcasting being accessed by internet search engines, his personal details became available on the internet. Thus, the present petition was filed seeking damages for mental agony.

Unmana Sarangi, Deputy Director (EW), Ministry of Information and Broadcasting filed a reply affidavit stating that the petitioner's personal data was removed from the website from August 1, 2020. Petitioner responded that though his personal details were stated to be removed on August 1, 2020, the details continued to be on the website till September 14, 2020.

Petitioner submitted that because his personal details were uploaded by the Ministry in the public domain, it was accessed by antisocial elements who threatened him causing harassment and trauma. He further submitted that despite office memorandums the Ministry has uploaded the personal details singling him out because he has taken up various sensitive social causes.

During the hearing on October 15, 2020, appearing for the Ministry Advocate Rui Rodrigues accepted that the Department of Personnel and Training had issued a memorandum on October 7, 2016, specifying that the personal details of the applicants under Right to Information Act should not be put up on the website. He stated that however, this memorandum did not reach the Ministry of Information and Broadcasting, and with its knowledge, corrective action was taken. He further argued that it is not that only petitioner's details were put up on the website.

Court noted that no details as to when the memorandums came to the knowledge of the Ministry were furnished. Secondly, no particulars were given whether in all the applications filed the personal details of all the applicants were put up on the website.

The bench referred to the case of Avishek Goenka v. Ashish Kumar Roy wherein, one Avishek Goenka claiming to be an activist in the field of Right to Information, had approached the Calcutta High Court with the contention that the authority should not insist upon the detailed address of the applicant under the Act of 2005 as and when an application is made under the said Act. He had apprehended that those persons having vested interest to conceal the information asked for by the activist, would cause a threat to the activist and there had been past incidents of unnatural deaths of the activists in the field, presumably by the interested.

The division bench of the Calcutta High Court considered Section 6(2) of the Act of 2005 and held that it would be the duty of the authority to hide such details and particularly from their website so that people at large would not know of the details. On November 20, 2013, Court passed the order accordingly, and the Secretary, Ministry of Personnel was directed to circulate the copy of the order to all concerned so the authority can take measures to hide personal details of the activists to avoid any harassment by the persons having vested interests.

After this, office memorandums were issued by the Ministry of Personnel, Government of India on October 21, 2014, March 23, 2016 and October 7, 2016. The office memorandum dated October 7 is relevant as it refers to the above order of the Calcutta High Court and directs that personal details of RTI applicants such as name, designation, address, email-id and telephone/mobile number should not be disclosed.

Rodrigues admitted that there was an error on the part of the Ministry and there is no malice or motive to put up the personal details of the Petitioner alone to harass him.

"From this statement by the Ministry, it may not be that the petitioner is singled out, but the reason why it so makes the matter more serious. The Respondents cannot seek dismissal of the writ petition contending that the petitioner is not the only victim of an irregularity, more particularly when the breach is regarding an enactment which is an essential component of a working democracy."

The decision of the Calcutta High Court mandating that personal details be not placed in public domain was rendered in the year 2013. Therefore, the contention that the mandate came in operation from 7 October 2016 is not correct, Court added.

Noting that uploading personal details of applicants is not only unnecessary, it also makes them vulnerable to unscrupulous elements, Court said-

"The issue also travels beyond the individual breach of the privacy of the applicant and potential likelihood of a risk. It is the impact on future applicants. Informed citizenry and transparency of information are vital for the functioning of democracy. Noticing that personal details of other applicants are put up in the public domain, some of those who want to seek information for the larger good may be deterred for the fear of being targeted. This could defeat the object of the Act. If such a large scale breaches in the field of Right to Information are not taken seriously, the right itself will be trivialized. Suitable action must be taken, and also seen to be taken, to underscore the importance of the Act of 2005."

"Looking at the magnitude of the lapse, it cannot be treated as just a routine internal matter. We therefore intend to place the responsibility of ensuring that necessary enquiry is conducted and that too in a time bound manner upon the highest official in the Ministry, the Secretary. Needless to state that if the enquiry will result in punitive action against the guilty government servants it would follow the applicable Rules and Regulations."

As for the damages of Rs.50 lakh sought by the petitioner, the bench concluded that he has the remedy of approaching a civil court in this regard. However, Court said that the respondents should pay the expenses incurred by the petitioner in filing and prosecuting this petition. Considering the facts and circumstances, the expenses were quantified at Rs.25000.