Kangana Ranaut Vs BMC- Use Of Muscle Power Or Causing Injury By Unlawful Means To Any Person Or Their Property Cannot Be Permitted In Any Civil Society: Bombay High Court 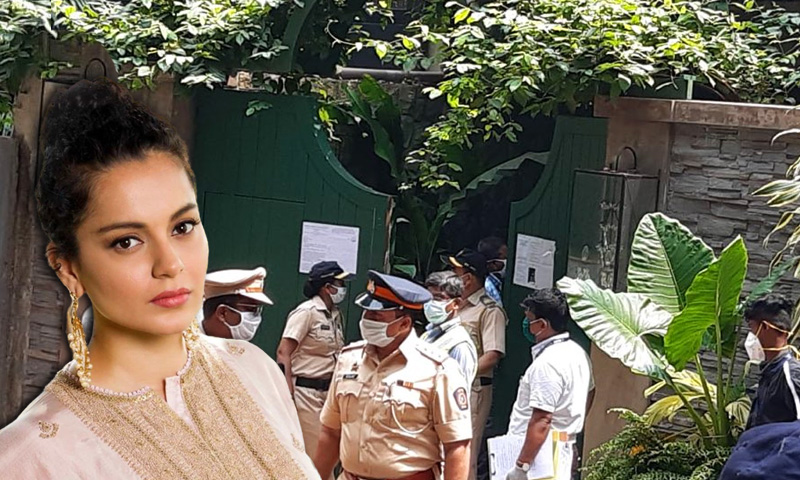 While quashing and setting aside the Brihanmumbai Municipal Corporation's demolition notice to actor Kangana Ranaut, the Bombay High Court observed that she was entitled to compensation as the action of the civic body is actuated by mala fides and involve a clear malice in law, causing a substantial injury to the petitioner actor.Division bench of Justice SJ Kathawalla and Justice RI Chagla...

While quashing and setting aside the Brihanmumbai Municipal Corporation's demolition notice to actor Kangana Ranaut, the Bombay High Court observed that she was entitled to compensation as the action of the civic body is actuated by mala fides and involve a clear malice in law, causing a substantial injury to the petitioner actor.

Division bench of Justice SJ Kathawalla and Justice RI Chagla held that in order to estimate the value of damage caused by the said demolition to the petitioner, a valuer is being appointed. Both parties, i.e. the petitioner and the MCGM, shall be heard by the valuer whilst making his report of valuation for which three months time has been granted.

While the petitioner alleged that the civic body ordered demolition of her bungalow turned office at Pali Hill in vendetta against her tweets/interviews against the ruling dispensation in Maharashtra, specifically the Shiv Sena party. The MCGM contended that their action of demolition on September 9 was routine and did not have anything to do with the actor's stand against the state government. It was contended the petitioner had started illegal construction inside the said bungalow and during a routine inspection being carried out in the same area, it was discovered by BMC officials that work is still ongoing at the site.

At the outset, Court observed-

"Before proceeding further, we make it clear that this Court does not countenance unauthorized construction, and also does not approve of loose and irresponsible statements against any individual, authority or Government. We do not accept as true any of the statements/allegations made by the Petitioner through her tweets with regard to the alleged prevailing atmosphere in the state of the state Police or against the film industry. If anything, we are of the view that the Petitioner should be better advised to exercise restraint when "as a public spirited person", she "airs her views regarding issues of public importance on social media platforms …."

However, the bench added-

"We must, however, hasten to add that the subject matter of the controversy in the present Petition or, indeed, of the impugned order of demolition/action on the part of Respondent Nos. 1 to 4, is not the tweets of the petitioner but action on the part of an arm of the state whilst dealing with a citizen. Irresponsible statements made by a citizen in an individual capacity, however distasteful or wrong they may be, are best ignored.

Illegal and colourable action/s on part of the state or its agencies vis-à-vis a citizen, is far too serious and damaging to society to be overlooked. Whatever be the folly of an individual, whether in the matter of unauthorized construction, or irresponsible statements hurting the sentiments of individuals or the public in general, no action against such individual by anyone, much less by the state, can lie except within the four corners of law. By no means, colourable exercise of power or resort to threats, use of muscle power and/or causing injury by unlawful means to such person or to his/her property, can be permitted in any civil society. such actions are the very antithesis of the rule of law."

"Shri Sanjay Raut has not denied or disputed the contents of the videoclip containing his aforestated interview. He has in his Affidavit only refuted the allegation that he has threatened the Petitioner and, as a cover-up, tried to explain that the use of the word 'harackhor' was in the context of her dishonesty and that he had only responded to the derogatory statement made by the Petitioner insulting the state of Maharashtra and Mumbai, which explanation we do not accept."

The bench noted further that immediately on the day after the demolition, i.e. September 10, the newspaper 'saamna' reported the demolition on its first page in a manner of rejoicing and victoriously, with the headline captioned 'Ukhaad diya' meaning 'uprooted'. In the said news report, it is stated that the petitioner who was unnecessarily spoiling the name of Mumbai Police by comparing Mumbai with Pakistan Occupied Kashmir has received a good blow from MCGM.

"The aforestated response of Shri Raut and the language used by him show that because the Petitioner tweeted on September 3, 2020 that she was threatened by Shri Raut and questioned, "why Mumbai is feeling like Pakistan occupied Kashmir". Shri Raut, without being bothered that the rule of law should always prevail, was determined to teach a lesson to the petitioner. Such conduct certainly does not bevt a leader like Shri Raut who is also a Parliamentarian."

Court pointed out that on September 5, 2020, i.e. the very same day, of Sanjay Raut's article of 'Saamna' and his interview to the News Nation Channel, the Mukadam of the MCGM landed up at the petitioner's bungalow and detected alleged ongoing works, which MCGM had failed to take notice of when the entire bungalow, including its huge outer facade was renovated and was thereafter seen standing, complete in all respects, at least since January 2020.

Thereafter, the bench referred to the affidavit filed on behalf of BMC officials including Bhagyawant Late, designated officer of MCGM for the said ward. Court even perused through several photographs of the site both after and before the demolition. The bench said-

Thereafter for the first time Shri Late stated on oath in his affidavit dated September 24 that the photographs were indeed taken by the mukadam on September 5, 2020, now stands completely exposed, and the Court has no doubt that since the guidelines/instructions set out in the Circular dated March 15, 2012 were totally breached, Shri Late as well as the Mukadam brazenly resorted to mislead this Court in the aforestated manner, the bench said.

During the hearing, Court enquired whether an entry was made in the detection register after the purported detection of works on September 5, 2020, since making of such entry was made mandatory as per the said circular dated March 15, 2012 relied by the MCGM itself. MCGM informed the bench that the Mukadam had not made the required entry in the detection register. It was also admitted that the status of the work which the Mukadam was required to set out, in compliance with the guidelines/instructions in the Circular of the MCGM is also not found in the purported Report of the Mukadam dated September 5.

Court held that the Mukadam had breached every requirement set out in the MCGM's Circular dated March 15, 2012, which MCGM itself has relied upon in its affidavit dated September 10, 2020. The bench observed-

"The above conduct, supported by the above facts and evidence, is one crucial pointer in the chain of events, showing that Shri Late and his officers were at least since September 5, 2020 determined to cause damage to the said Bungalow by demolishing the same, thereby causing loss to the Petitioner. To achieve this end, Shri Late and his team/officers, have not only ignored all the provisions of law, as well as their own Circular/guidelines dated March 15, 2012, which Shri Late himself relied on, but have interalia by making false statements on oath, attempted to mislead this Court."

Finally, the bench concluded that the materials relied upon by the MCGM in support of its case, including the photographs produced before the Court, do not at all indicate that any of these works were being carried out at the bungalow at the time of issuance of the impugned Notice under Section 354A of the Act. Mere presence of some workmen or some construction debris is no evidence that the works referred to in the impugned notice were ongoing works, Court said.

Relying on the decision of the Supreme Court in Municipal Corporation Of Greater Mumbai vs M/S Sunbeam High Tech Developers, the bench held that petitioner deserves compensation as the MCGM's action was mala fide-

"As we have come to a clear conclusion that the impugned notice under section 354A of the Act and the action of demolition following it, are actuated by malafides, in any event, involve a clear malice in law, causing a substantial injury to the Petitioner, we would be perfectly justified, on the basis of the law stated by the Supreme Court in the case of Sunbeam Hightech Developers (supra), to order compensation against responsible Respondents.

Any such Order must be preceded by an estimate prepared by an approved valuer of the damage caused to the Petitioner's property. We would therefore have a valuer appointed for the purpose of preparing such an estimate. Both parties, i.e. the Petitioner and the MCGM, shall be heard by the valuer whilst making his report of valuation. We would reserve our further Orders on such report being submitted by the valuer. We would also pass appropriate Orders on recovery of any part of such compensation from individual officers of the MCGM when ordering for payment of such compensation."