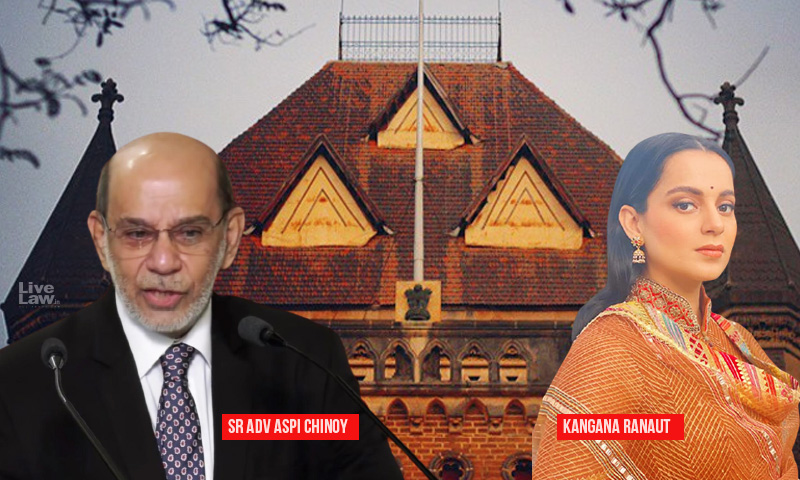 The Municipal Corporation of Greater Mumbai's counsel told the Bombay High Court on Monday that actor Kangana Ranaut was being evasive and deliberately did not state categorically that no alterations were made to the partly demolished property but instead said no illegal alterations were made.Before Senior Advocate Aspi Chinoy made his submissions on behalf of the MCGM, Kangana's lawyer...

The Municipal Corporation of Greater Mumbai's counsel told the Bombay High Court on Monday that actor Kangana Ranaut was being evasive and deliberately did not state categorically that no alterations were made to the partly demolished property but instead said no illegal alterations were made.

Before Senior Advocate Aspi Chinoy made his submissions on behalf of the MCGM, Kangana's lawyer Dr. Birendra Saraf told the Court that as requested, he has submitted the tweets by Kangana Ranaut from August 30 onwards. He added that he has not been able to trace the entire video of the interview with Sanjay Raut in which he had allegedly abused the petitioner, calling her 'haramkhor ladki'.

"Petitioner has been characterized as a person who has been victimized and harassed. However, the reality is that the petitioner has carried out unauthorized structural alterations. She would have us believe that all this (demolition) is the reaction to her public utterances and statements.

It is the reverse side of the coin. She has made unlawful changes and is claiming demolition to be a response to her utterances."

There is a studied silence in her amended petition and rejoinder as to when these alterations were made, Chinoy asserted.

He then argued that the writ petition was not maintainable as writ jurisdiction of the High Court cannot be invoked for something like this, instead a suit can be filed. Chinoy said-

This will be a case of tail wagging the dog. The petitioner herself creates a political controversy and cites that to be reason to entertain a writ."

Chinoy : This will be a case of tail wagging the dog. The petitioner herself creates a political controversy and cites that to be reason to entertain a writ.@KanganaTeam @mybmc

Thereafter, Chinoy submitted that the record establishes that the petitioner has brazenly made unlawful structural alterations but she has denied the same and said no illegal alterations are made. However, she has not stated before this court when the alterations were made, Chinoy argued.

Referring to a reply filed on behalf of Kangana on September 8 when she first received the notice under Section 354A, Chinoy submitted-

"She says no work is being done, whereas three days ago our inspection revealed work in progress, with six workers present at the site along with machinery etc. What is being portrayed is that waterproofing work was going on.

The law allows demolition within 24 hours. She does not say in the reply that her work was in the nature of water-leakage proofing. She makes a categorical denial by saying no work at all.

When the response was "no work is being carried out", I don't have to wait to carry out demolition. The law says that there is no need for elaborate hearing over 7 days. Nowhere in the entire petition, has she said that she did not carry out the work, she had permission for the work etc. This is a writ under Article 226. You can't play poker."

Chinoy further averred that the petitioner has very carefully made only evasive denials knowing fully that she has violated the laws. There is not even one word in the petition about when these alterations and additions against the sanctioned plan that were made. As per Sunbeam judgment of SC, these works need prior permission after submitting plans, Sr Adv Aspi Chinoy contended.

At this juncture, Dr.Birendra Saraf sought to interject and submitted that his client was not present in the city so it was difficult to submit certain details in the beginning.

"In this day and age, when you can tweet all the way from Manali, you can surely tell your advocate when the work started", Chinoy responded.

Justice Kathawalla reasoned that lay people (like the petitioner) may not realize the distinction between Section 351 and 354A. Chinoy responded-

"The reply only needs to state when the work started and whether the prior permission for the work was obtained. When you build toilets in an open area, it is a Floor Space Index issue but when you amalgamate your bedroom with another bedroom, it is not a simple matter.

When she can remember all other public issues, how come your memory fails you in this work, which is carried out with lakhs and lakhs of rupees over several weeks. I agree that there is a quicker response in this case when compared to other cases. But that is not an answer. You cannot carry out unauthorized constructions."

This issue of quicker response may be relevant on the issue of whether the action was malafide, Justice Kathawalla observed.

In response to this query, Sr Adv Chinoy argued that malafides have to be analyzed in the context of the petitioner's actions-

"You have to come to court with clean hands. The Court has to look at the conduct of the petitioner and analyze the issue in the context of her actions. There is a complete lack of candour on the part of the petitioner as to whether the work was done and when the work was done. We have seen five workmen and one supervisor on the site. We have seen gunny bags and plywood on the site. There was detailed work going on."

"We have nothing on our records to show that she has applied for permission to carry out the alterations and done it after getting such permission. Suppose they had come and said they have stopped the work, we would have had to hear them. But what did they say? That no work was done. This is the important distinction.

Even today you don't tell us when the work started, this is amazing how the petitioner is withholding information. If in a case on inspection it is found that unauthorized alterations have taken place and finishing work is going on, Section 354A can be invoked.

And you (Kangana) create a huge hullabaloo about being de-housed. But why don't you tell your case and state when the construction was done and if it was done with permission."

Also, according to the petitioner, she had tweeted about Mumbai police and the action of demolition was taken in response to that tweet. However, the problem is that her tweet was posted at 5 pm and the inspection carried out at the partly demolished property was at 1 pm. The inspection was three hours before the tweet of Kangana Ranaut. Where is the link? Mala-fides cannot be loosely alleged, Chinoy said.

Addressing the allegation of malice against the Corporation, Chinoy said-

Your utterances cannot give immunity to your unlawful works. It cannot be that you carry out unlawful works, and say that the action was a response to your criticism of the government."

On the allegation that the demolition was carried out in haste, Chinoy submitted that the law empowers the corporation to act within 24 hours. He cited the decision in Sopan Maruti Thopte vs Pune Municipal Corporation & 9 Ors in support of his argument.

Referring to Kangana's petition, Chinoy said that the allegations on mala fides are vague as words like "certain quarters" "displeased some" etc are used and no specific names are taken.

Before concluding, he submitted that entertaining the writ will send a wrong signal that one can get away with illegalities through public posturing.

The matter will now come up for hearing tomorrow at 3 pm. Rajya Sabha MP Sanjay Raut's counsel Advocate Pradeep Thorat has already filed an affidavit in the matter and will make his submissions tomorrow.

Entertaining this writ petition will send a wrong message that people who make public posturing can get away with their unlawful activities : Chinoy (BMC's lawyer).@KanganaTeam @mybmc