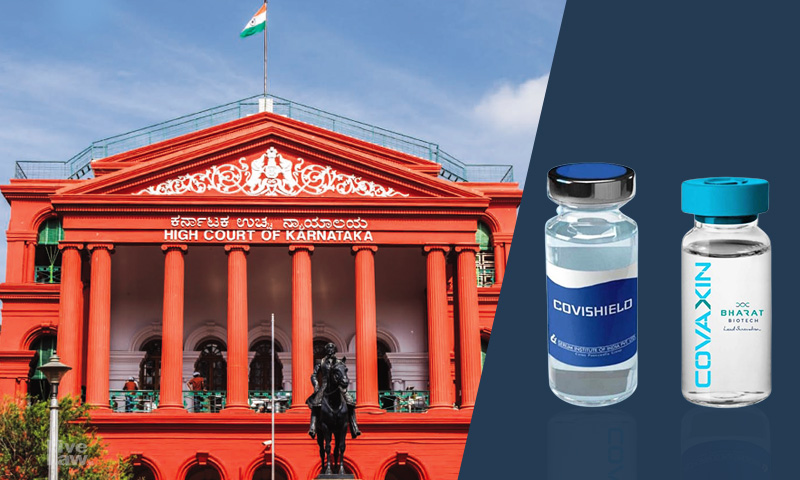 The Karnataka High Court on Thursday directed the Central Government and State government to take note of a peculiar situation created in the state where on hand a person belonging to age bracket 18 years to 44 years is not likely to get the first dose from a state establishment unless not in the priority group, while private health care institutes are able to give first dose on payment...

The Karnataka High Court on Thursday directed the Central Government and State government to take note of a peculiar situation created in the state where on hand a person belonging to age bracket 18 years to 44 years is not likely to get the first dose from a state establishment unless not in the priority group, while private health care institutes are able to give first dose on payment of charge.

A division bench of Chief Justice Abhay Oka and Justice Aravind Kumar said "It is necessary for both Central and State governments to take note of this situation in the context of Article 14 of Constitution of India."

During the hearing the court queried with Additional Solicitor General Aishwarya Bhati, how the private players in the State of Karnataka had been allowed to exceeded their 25 percent quota of vaccine allotment. To which she replied by saying "In terms of policy of distribution of Vaccine. This policy has started from month of May. The number which is supplied to the private players has only exceeded by 18,000 doses."

She added that "In state of Bihar quota was not booked by private players for the month of May."

The the court then asked "Are you suggesting that if in Bihar the private players pick up only 15 percent can the rest 10 percent be distributed to other states. To which she replied in the affirmative.

Accordingly the court said "We direct both Central government and State governments to make a statement on this aspect and on the question of issuing direction to those private health care facilities which are using 25 percent quota. The response shall be filed within one week."

State Government to respond on how it will administer vaccines to all groups of persons.

Even in the case of Covishiled, the court noted that 10,52,720 doses were available in state as on May 24 and 7,17,310 doses were likely to be allocated by the Central government. It is stated that these doses will take care of the second dose of all those who are due as of today.

Advocate General Prabhuling K Navadgi said that no beneficiary in the state who has taken the first dose will be denied the second dose of Covaxin. He also stated that the state has stopped giving first dose of Covaxin to any person of any age group or any category.

Following which the court said "Thus the scenario which emerges today is that out of total quota, which is received by the state government from the Central government. First dose of Covaxin cannot be given to any age group or any category. Secondly, as the position stands in the age group of 18 to 44 years, the first dose can be administered only to frontline workers and beneficiaries groups."

Those Entitled For Vaccine Should Not Be Denied Vaccine For Reason of Non-registration on portal.

The court noted that "In one of our earlier orders we had observed that it is necessary to ensure that every citizen is made aware of the requirement of registration for vaccination. There may be many classes of society who may not be able to register themselves for vaccination, and even if they register they may not get doses from government establishments."

It added "Moreover, as per the policy of the state government, groups which belong to frontline workers and priority groups must be made aware of their eligibility of getting vaccination on priority basis."

It accordingly directed "State must come out with its decision that those who are entitled to priority and those who are not entitled to vaccine on priority are not prevented from taking the vaccine only because of not registering. State should consider directing the implementing officers to take steps in this behalf."

The court said "State government has recognized person with disability including (mentally retarded and one caretaker) for vaccine. The State government will have to come out with an action plan in what manner they will administer vaccines to this category who because of disability may not be able to come to vaccination centers."