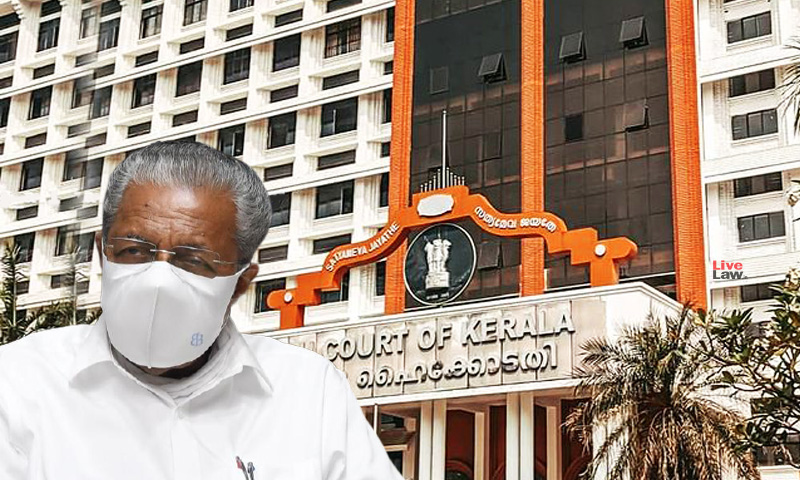 The Kerala High Court today refused to set aside the Kerala Government's decision to conduct the swearing-in ceremony of the newly-elected Left Democratic Government in a physical ceremony at Chandrasekharan Nair Stadium in Thiruvananthapuram on May 20, with 500 people in attendance.However, the Bench comprising Chief Justice S Manikumar and Justice Shaji P Chaly underscored the need...

The Kerala High Court today refused to set aside the Kerala Government's decision to conduct the swearing-in ceremony of the newly-elected Left Democratic Government in a physical ceremony at Chandrasekharan Nair Stadium in Thiruvananthapuram on May 20, with 500 people in attendance.

However, the Bench comprising Chief Justice S Manikumar and Justice Shaji P Chaly underscored the need for strict adherence to Covid-19 protocol during the ceremony, especially as the Government of Kerala "is a forerunner in Covid-19 management."

In this vein, the Court observes in its judgment -

"Though States like West Bengal and Tamil Nadu, with more number of Legislators in the Assembly have performed the Swearing-in Ceremony with lesser number, Government of Kerala, a forerunner in Covid-19 management, should restrict the number to the maximum to avoid the widespread COVID-19."

The Court also suggested that the government should consider measures to bring down the strength of persons present at the ceremony, and drop the relatives and spouses of the newly-elected Members of Legislative Assembly from the list of invitees.

"At this juncture, we categorically observe that there is no necessity for the spouses of the MLAs to be present in the Swearing-in Ceremony. "

This is what the Court directed today -

(i) All the Covid protocols/guidelines/circulars/notifications issued on 06.05.20201 and 14.05.2021 have to be adhered to or strictly followed by the State Government while conducting the Swearing-in Ceremony

(ii) Political parties shall take a decision as to whether all the MLAs are required to be present in the Swearing-in Ceremony.

(iii) The spouses and relatives of all the MLAs, except the designated Ministers are not required to participate in the Swearing-in Ceremony. The ceremony can be viewed from the residence of the respective MLAs.

(iv) Government officials required for the performance/ participation in the ceremony alone shall be permitted.

(v) As the Government have not come out with the details of special invitees, other than the Hon'ble Judges, Secretaries to the Government up to the level of Principal Secretaries, Police officials up to the level of Additional Director General of Police, Senior Law Officers, stated supra, Chief Secretary, Government of Kerala shall consider whether the presence of all the special invitees, including the member of the State Committee of the political parties are required to be present, in view of the utmost adverse situations prevailing due to the pandemic. The above direction applies to all the special invitees including persons who have contributed to the Chief Minister's Disaster Relief Fund.

The Chief Justice-led Bench was hearing two Public Interest Litigation petitions against the decision to conduct the swearing-in ceremony of the newly-elected MLAs in a physical ceremony at Chandrasekharan Nair Stadium in Thiruvananthapuram on May 20, with more than 500 people in attendance.

The Court had some strong words for the State Government's decision to accommodate the spouses and relatives of each of the newly-elected Members of Legislative Assembly taking oath.

On this theme, in the course of its judgment, the Bench asks -

"We are unable to understand as to why the spouses or relatives of each of the MLAs are required to be present in the ceremony and when they are not indispensable, either for the performance of the ceremony or for witnessing.   Considering the present COVID-19 Pandemic situation, velocity and vigour of the virus, Test Positivity Rate in various Districts, uncontrolled rise in the death, etc., we are of the view that such persons ought not to have been included in the list of participants"

The first petition filed by an association called Chikitsasaneethi through Advocates Arul Muralidharan and Vineetha Vijayan has challenged the Government's adamant decision to conduct the ceremony with the participation of more than 500 people, "throwing to the winds all orders issued by it".

Stating that the respondents have a duty cast upon them to strictly implement their own orders, the Association's petition averred that the decision violates the lockdown order, the Disaster Management and the Epidemic Diseases Act.

The petition sought these reliefs -

Another petition by a human rights activist Noushad Thekkayil, filed through Advocates Akhil George, Gajendra Singh Rajpurohit and Thanseela MB, sought a quash on the State Disaster Management Authority's Order easing lockdown restrictions for the swearing-in ceremony, and a declaration that the Order is arbitrary.

"The 1st respondent is making a flippant reaction to the concern and welfare of the public at large and is placing predominant consideration for the flamboyance and extravagance of the oath taking ceremony without taking into the fact that the venue, i.e., Thiruvananthapuram Central Stadium, is located in the epicentre of covid-19 spread where additional restrictions are made to pull down the covid contacts," the petition read.

Significantly, two letters addressed to the Chief Justice S Manikumar made news yesterday, one by Advocate Anil Thomas, and the second by leader of Democratic Party George Sebastian. The letters prayed that the Court take suo motu cognizance of the swearing-in ceremony conducted in violation of the lockdown order as well as provisions of the Disaster Management and Epidemic Diseases Act.