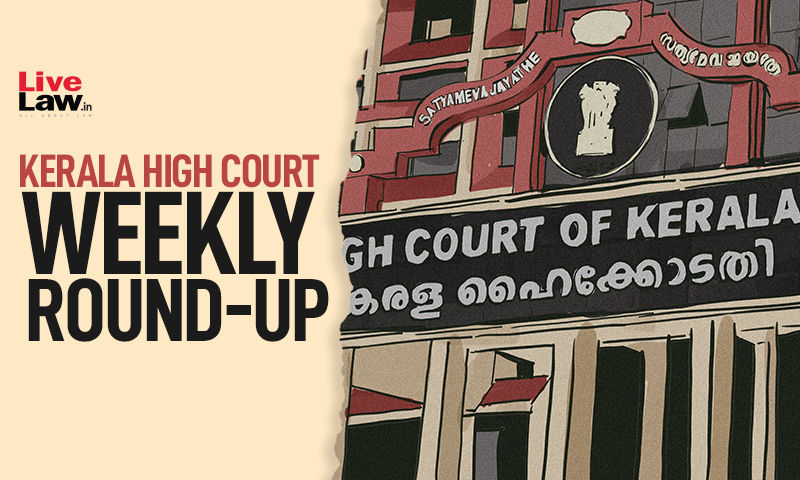 Whether Compulsory Retirement Warrants Reduction In Pension/ Gratuity To Be Decided At Time Of Imposing Punishment: Kerala HC

The Kerala High Court on Monday held that the decision as to whether a particular case where compulsory retirement is imposed warrants reduction in pension or gratuity or both is to be specifically considered by the authority imposing the punishment, at the time of such imposition itself.

Justice Anu Sivaraman, while holding so, observed that if the same was not done, "...the entire exercise of appreciation of the factors which lead to the imposition of the penalty will have to be redone at a later point in time which, according to me, would be impermissible since that would amount to a re-appreciation of the facts involved and therefore to double jeopardy".

Whether Suit Falls U/S 92 CPC Has To Be Decided Before Trial: Kerala High Court

The Kerala High Court on Tuesday held that the question as to whether a suit falls under Section 92 of the Code of Civil Procedure (C.P.C.) would have to be decided before the trial.

Justice A. Badharudeen reasoned that a suit under Section 92 can be prosecuted only with the leave of the court and if the parties are relegated till the finalisation of the trial and if ultimately it is found that the Suit requires leave, the entire exercise of trial will become futile, as the Suit itself becomes barred for want of leave.

The Kerala High Court on Tuesday denied bail to six Sri Lankan fishermen who had been apprehended by the Indian Coast Guard officials on suspicion that they are part of international drug cartels and had been involved in transporting the same at the time of apprehension.

Justice Viju Abraham observed that there was "considerable force" in Special Public Prosecutor's argument that petitioners being nationals of Sri Lanka, there is every chance for them to abscond and their presence cannot be secured at the time of trial.

The Kerala High Court on Wednesday dismissed the anticipatory bail application of a 70-year-old accused in a rape case who has been absconding for 12 years.

The Kerala High Court on Wednesday held that possession of higher qualifications by a candidate in a selection process presupposes the acquisition of the lower qualification for the said post.

The Kerala High Court on Wednesday dismissed the state government's appeals against an order directing it to release requisite funds to KSRTC. A single bench last month had directed the State to release the funds, required by KSRTC to clear salary dues of its employees for July and August months and the bonus eligible to those below the managerial cadre, on or before September 1

The Division Bench consisting of Justice A.K. Jayasankaran Nambiar and Justice Mohammed Nias C.P declared the appeals infructuous after considering the submissions of the Advocate General.

The Kerala High Court on Friday held that the legal advice rendered by the Advocate General to the Government is exempted from disclosure under Section 8(1)(e) of the Right to Information Act, 2005 (RTI Act, 2005) as the relationship between the two constituted a fiduciary relationship.

Adjourning the matter to a later date, the Kerala High Court Monday extended its stay on the transfer of Principle District and Sessions Judge, Kozhikode, S. Krishna Kumar - who had passed the controversial 'Provocative Dress' order in Civic Chandran's case, to the post of Presiding Officer, Labour Court, Kollam.

The Division Bench consisting of Justice A K Jayashankaran Nambiar and Justice Mohammed Nias C P adjourned the case for after a week, as the High Court Registrar sought time for filing an explanation on the reason for the judge's transfer.

The Kerala High Court on Monday has closed all the Writ Petitions filed in connection with the K-Rail Project for the time being, with full liberty to the petitioners to seek a rehearing when any further actions are taken by the Government of Kerala, either for the social impact assessment or acquisition of land.

Justice Devan Ramachandran observed that since the SIA notifications issued have lapsed and the land acquisition orders issued by the Kerala Government are at a standstill as the Central Government is yet to approve the DPR, the Court should not consider the matter at this stage.

In a significant ruling, the Kerala High Court Monday said that the drastic changes in matrimonial life of a pregnant woman fulfils the condition of 'change of her marital status' in Rule 3B of the Medical Termination of Pregnancy (MTP) Rules, thus making her eligible to undergo medical termination of pregnancy up to 24 weeks.

Citing a Supreme Court judgement in which it was held that a woman's reproductive choice is also a dimension of her personal liberty and also relying on the apex court's recent order in an MTP case, Justice V.G. Arun said: "If interpreted and understood in the above manner, the drastic change in the matrimonial life of a pregnant woman is equivalent to the 'change of her marital status.' The word 'divorce' cannot in any manner qualify or restrict that right".

It was further added by the Court that, "the Medical Termination of Pregnancy Act does not contain any provision requiring the woman to obtain her husband's permission for terminating the pregnancy. The reason being that it is the woman who bears the stress and strain of the pregnancy and the delivery".

The Division Bench consisting of Chief Justice S. Manikumar and Justice Shaji P. Chaly dismissed the petition as the petitioner failed to produce documents proving the allegations averred in the plea. The Court had previously instructed the petitioner to find out whether the police instructions that were given regarding traffic norms to be followed during the Bharat Jodo Yatra were being violated.

The Kerala State Road Transport Corporation moves Kerala High Court seeking directive to Popular Front of India to pay Rs. 5.06 Crores as compensation for the damages caused to the corporation during the flash hartal called the party in the state following the arrest of its leaders by the NIA.

In the petition moved through the Standing Counsel for KSRTC, Advocate Deepu Thankan sought direction to the Popular Front of India party to pay compensation to the KSRTC for the loss sustained by them.

The Kerala High Court on Tuesday initiated a suo motu public interest writ petition to include 'Congenital Adrenal Hyperplasia' in the group of rare diseases and to grant financial aid and support to the patients. It is a genetic disorders that affects adrenal glands.

A Division Bench consisting of Chief Justice S. Manikumar and Justice Shaji P. Chaly has issued notices to the State government and the Principal Secretary to its Health and Family Welfare Department and has posted the matter after a week.

"To live without adhering to any religion in our democratic secular country is certainly in tune with our Constitutional principles", Justice Arun said at the event.

The Kerala High Court on Wednesday reiterated that State must take steps to ensure unhindered access to under-construction Vizhinjam Port site, in compliance with its previous order issued last month.

The Kerala High Court on Thursday directed the Popular Front of India (PFI) to deposit an amount of Rs. 5.20 crores with the Additional Chief Secretary, Home Department, towards the damages estimated by the State Government as well as the KSRTC on account of its 'flash hartal'.

A Division Bench consisting of Justice A. K. Jayasankaran Nambiar and Justice Mohammed Nias C.P. observed that PFI and its general secretary are "wholly and directly responsible" for the injuries inflicted by their supporters on the citizens, as also for the damage caused to public/ private property.

Taking serious note of the unaffordability of a life-saving patented medicine for breast cancer, the Kerala High Court on Thursday directed a competent officer of the union health ministry and the department of pharmaceuticals to file their response on the issue within a month.

The Court issued the direction after noting that the matter had to be taken up at the higher level.

Justice V.G. Arun warned that if the counter is not filed within the stipulated time, the court would be constrained to proceed with the case based on the "uncontroverted averments in the writ".

The Kerala Infrastructure Investment Fund Board (KIIFB) has told the High Court that the Enforcement Directorate's protracted investigation into the issuance of Masala bonds is detrimentally affecting infrastructure development plans in the state.

The submission is part of a rejoinder filed by the KIIFB in response to a counter affidavit of the central agency. ED is probing the alleged violations of Foreign Exchange Management Act (FEMA) in issuance of Masala Bonds in 2019. KIIFB had challenged the summons issued by Enforcement Directorate.

Virginia Shylu v. Union of India and Other Connected Cases

The Kerala High Court this week continued hearing a batch of petitions seeking enforcement of 'Right to be Forgotten' and consequent removal of identifiable information from judgments or orders published in various online portals and the High Court Website.

A Division Bench consisting of Justice A. Muhamed Mustaque and Justice Shoba Annamma Eapen heard the case of a dentist who is aggrieved by the appearance of his name on Google search engine and reflection of a previous case he was embroiled in. It was alleged that the petitioner's second marriage, his sister's marriage and several other personal hardships had befallen due to publication of the case against him.

The Kerala High Court on Friday stayed the criminal proceedings initiated against actor Sreenath Bhasi over using filthy language against a female interviewer during an interview conducted by 'Bihind Woods' social media channel.

The Kerala High Court on Friday heard two petitions filed by Kerala Infrastructure Investment Fund Board (KIIFB) and Former Finance Minister of Kerala Dr Thomas Issac challenging the summons issued by the Enforcement Directorate (ED) in connection with the investigation into the financial transactions of KIIFB.

Justice V G Arun heard the contentions raised by various counsels appearing in the petitions at length and posted the matter for 10th October for orders.

The counsels representing Mavunkal before the bench of Justice Ziyad Rahman A.A. argued that even though he was a party to the proceedings before the Additional CJM, no notice had been served on him, and that the order had been passed by the Court below under Section 451 of Cr.P.C. without hearing him. The petitioner was represented by Advocates M.G. Sreejith, Vidyajith M., P. Jaya, and Luke J. Chirayil.