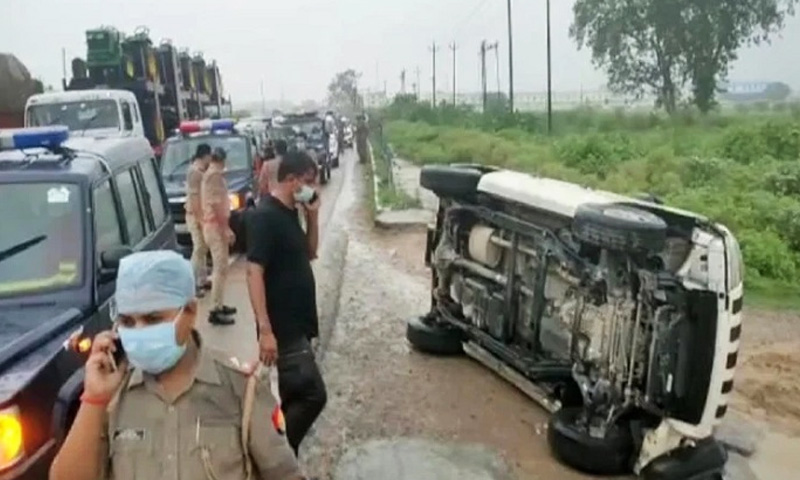 A letter petition has been addressed to the Chief Justice of the Allahabad High Court seeking an independent CBI/ SIT enquiry into the alleged police encounter of gangster Vikas Dubey, who was arrested yesterday from MP's Ujjain, allegedly for killing eight policemen in UP's Kanpur on July 3.

The letter, penned by Supreme Court Advocate Pawan Prakash Pathak and a final year law student from Delhi University, Abhijeet Kumar Pandey, also seeks an enquiry into the killing of 8 police men and alleged encounter of five aides of Dubey.

"It is humbly prayed that the Hon'ble Court may take cognizance on this letter petition in which we are praying for a CBI Or SIT enquiry into the alleged episode of 8 killing of policemen & followed by various encounters in the instant matter and also frame guideline to curb the extra judicial killing because an eye for an eye will make the whole world blind," they wrote.

Tracing the evil of "extrajudicial killings" in India from pre-independent era, Pathak and Pandey wrote,

There is no second thought to the fact that in our society we have some dreaded criminals against whom running a fair trial is difficult, but this vest no right in police machinery to go for encounters as a ultimate option against hardcore criminals & gangsters."

They have pointed out that in UP alone, the police officials have allegedly carried out 59 extrajudicial killings, since 2017.

"Panel comprising of four United Nations independent experts on human rights was formed to enquire into the issue. Cases from March 2017 were examined by Special Rapporteurs and according to their report- in additional to fake/staged encounters there have been instances of threat to family members and the human right defenders," they said.

The letter thus urges the High Court to frame guidelines in order to curb the frequent cases of staged encounters.

Yesterday, a petition was filed before the Supreme Court, hinting at the possibility of Dubey being "killed" by the UP Police.