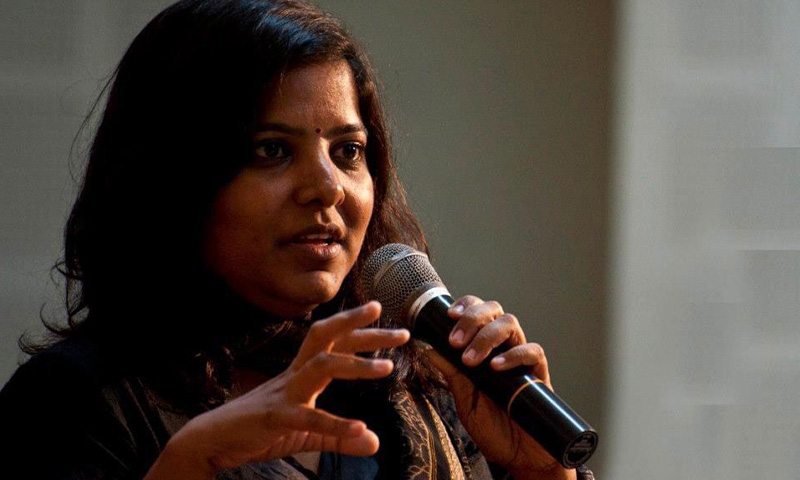 While declining a plea made by the poet/ filmmaker Leena Manimekalai for transfer of the criminal defamation case pending against her on the file of Saidapet IXth Metropolitan Magistrate, Chennai Sessions Court also observed that the allegations against the court's presiding officer are 'unfounded' and 'invented for the purpose of transfer petition'.It is pertinent to note that the Supreme...

While declining a plea made by the poet/ filmmaker Leena Manimekalai for transfer of the criminal defamation case pending against her on the file of Saidapet IXth Metropolitan Magistrate, Chennai Sessions Court also observed that the allegations against the court's presiding officer are 'unfounded' and 'invented for the purpose of transfer petition'.

It is pertinent to note that the Supreme Court recently directed the Saidapet Magistrate Court to complete the trial in the criminal defamation case, filed by Ganesan against Manimekalai over the "MeToo" sexual harassment allegations raised by her against him in a Facebook post in 2018, as expeditiously as possible, preferably within a period of four months.

Before the Sessions, the petitioner/ accused expressed her apprehension that if the trial were to continue before the same Magistrate, then it wouldn't be impartial/ fair and transfer of the case to another competent court is necessary to protect her fundamental rights.

Before the Sessions Court, the petitioner contended that the procedure of law under Cr. P.C and principles of natural justice stand vitiated since the Saidapet Magistrate has proceeded as per the whims and fancies of the respondents. The petitioner counsel also underscored that the sequence of events indicate that the Magistrate is biased towards the respondent/ complainant. The petitioner also relied on Gurucharan Dass v. State of Rajasthan (1966) to argue that 'if there is a reasonable apprehension on the part of a party to a case that justice will not be done', then such case can be transferred. The party will be entitled to transfer if he/she/they can show that there are circumstances from which he entertains such apprehension and the said apprehension is reasonable in the circumstances alleged.

Taking note of the petitioner's argument, the court noted in the order as below:

"....It has been observed by the Hon'ble Supreme Court that a mere allegation that there is apprehension that justice will not be done in a given case, does not survive. The court has further to see whether the apprehension is reasonable or not. The apprehension must not only be entertained but must appear to the court to be a reasonable apprehension and it squarely applies to the case on hand since the allegations made against the presiding officer are unfounded and invented for the purpose of transfer petition...", stating the same, the Sessions Court concluded that it hasn't found any merits in the contentions raised by Manimekalai and refused to transfer the case to another competent court.

During the pendency of the criminal defamation case before the Magistrate, Susi Ganesan filed a miscellaneous petition under Section 104 Cr. P.C to impound Manimekalai's passport and travel documents, alleging that she might flee the country without completing the trial. The petitioner gave the undertaking to appear before the court when required and the petition was closed after recording the same. However, it was also mentioned that the respondent/ complainant will have the liberty to request reopening the same whenever there is a breach of the undertaking given.

Later, in November 2020, High Court directed the Magistrate to dispose off the criminal defamation case in nine months.

In August 2021, another petition was filed by Susi Ganesan for reopening the 2020 miscellaneous petition that was already closed by the trial court after recording Manimekalai's undertaking. On the complainant's application in November, 2021, the Magistrate allowed reopening the petition. This was vehemently challenged by Manimekalai's counsel.

The petitioner contended that the application was allowed 'mechanically on the same day' without affording Manimekalai an opportunity to file the counter. But, the court observed that the Magistrate has specifically mentioned in the order that both sides were heard.

"...Also, an affidavit has been filed by the petitioner /complainant in C.M.P No. 119/ 2020 and thereafter, after hearing both sides, it has been closed with liberty to reopen when there is a breach of undertaking. Therefore, the question of filing counter in C.M.P 119/ 2020 does not arise", the court said while underscoring that there has been no violations of the principles of natural justice

In September 2021, Manimekalai filed a memo before the trial court itself averring that it cannot review its own order and the order of reopening CMP 119/ 2020 was erroneous. About this angle, the Sessions Court noted that the petitioner herself should have approached a higher forum to challenge the order passed instead of disputing it before the same forum by filing a memo. The court also noted that the reopening of the case upon the satisfaction of the breach of the undertaking given cannot be construed as a review of the order already passed.

Another allegation levelled by the petitioner to prove the bias of the Magistrate was that she was made to wait in the courtroom till evening, without any reason, on the days that she appeared. Many times, she was made to wait on request of the counsel for the respondent, it was alleged. About this, the Sessions Court opined that the accused/ petitioner is a well-educated woman and she should have understood that the circumstances in which she were made to wait would have been due to some other court work or the counsel engaged being in other courts. Such allegations cannot form the basis for creating doubts against the presiding officer, the court observed.

Further, Manimekalai alleged that Susi Ganesan filed the petition for reopening the case without mentioning the relevant provisions of law. The Sessions  Court, however, clarified that the exclusion of the relevant provision or even an erroneous application of provisions of the law will not deter the court from looking into the case without rejecting/ returning the petition. Therefore, the court inferred that the trial court has not deviated from any prescribed procedure.

The petitioner also submitted that on a given day, the matter was passed over twice upon the request of the respondent, and then the petitioner was asked to file a petition under Section 309 Cr.P.C. However, the court refused to receive the petition it requested later and adjourned the case. About this particular allegation of bias, the Sessions Court also took note of the contradictory stand taken by the Magistrate.

Though the respondent wanted the court to remand the accused/ petitioner for two days so that the trial could be completed, the Magistrate says that she rejected the request and the petition under Section 309 Cr. P.C was also given back.

One of the last allegations was that the junior advocate that represented the petitioner was not allowed to make a submission in the absence of Vakalat whereas the Magistrate recorded the presence of another advocate for the respondent who is not the counsel on record. When the petitioner termed it as the 'double standard' of the Magistrate, the Chennai Sessions Court found it to be invalid since the petitioner was given ample opportunity to represent herself through her previous counsels who never filed any vakalt.

Citing the above reasons, the Chennai Sessions Court concluded that mere insistence on Manimekalai by the Magistrate to complete the trial expeditiously as directed by the Madras High Court and Supreme Court cannot be equated to the denial of a free and fair trial. Therefore, the court dismissed the petition filed by Manimekalai.

Leena Manimekalai, a renowned filmmaker, poet and artist, earlier approached the Madras High Court by way of a writ, challenging the decision of Regional Passport Officer, Chennai to impound her passport. In 2018, when the #MeToo Movement was in the fore, Leena came forward with sexual harassment allegations against Director Susi Ganesan. A criminal defamation case was pending against the filmmaker since 2019, filed by Susi Ganesan in the Chennai Magistrate Court.

In the petition before High Court, Manimekalai, through her Advocate, had submitted that the impounding order was passed by completely disregarding her reply to the show cause notice issued priorly. She also contended that the passport was renewed back in 2017, and since there weren't any criminal proceedings against her at the time of renewal, it cannot be said that the renewal was completed by suppressing material facts.

Susi Ganesan was predetermined to harass her through the criminal defamation case, and the application filed before Saidapet Magistrate seeking directions to the concerned officer for impounding passport reveals his intentions, the petitioner stated. The plea was once closed by the Magistrate, which was challenged by Ganesan before High Court, but to no avail. The petitioner argued that it was only after this juncture that the Magistrate re-examined the earlier order upon a fresh petition by Susi Ganesan and directed the passport officer to impound, which in itself was illegality.

Allowing the writ petition, Justice M. Dhandapani directed the Regional Passport Office to release the impounded passport within a period of one week from the receipt of the court's order in December.

Later in December 2021, the apex court refused to interfere with the High Court order on Susi Ganesan's appeal.

Susi Ganesan also filed a civil defamation suit in the High Court, in which he sought an interim restraint on Manimekalai's public statements against him. On 20th January, 2022, Madras High Court passed an interim injunction to restrain Leena Manimekalai and film producer Susi Ganesan from going to the press or making social media comments regarding their respective contentions in the defamation suit filed by the latter over the #MeToo sexual harassment allegations.