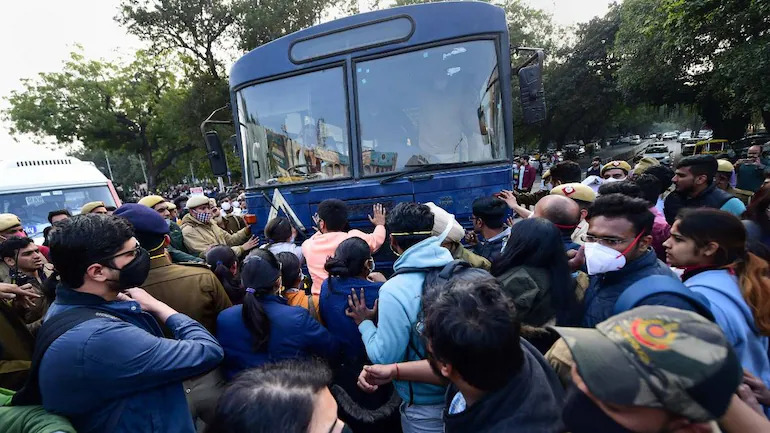 A letter plea has been moved in the Supreme Court seeking a direction to the Commissioner of Police Delhi to initiate an inquiry and take stern action against Delhi police personnel who were involved in the incident of physical assault on the protesting resident doctors.The letter petition addressed to the Chief Justice of India (CJI) NV Ramana has been moved by Delhi-based Advocate Vineet...

A letter plea has been moved in the Supreme Court seeking a direction to the Commissioner of Police Delhi to initiate an inquiry and take stern action against Delhi police personnel who were involved in the incident of physical assault on the protesting resident doctors.

The letter petition addressed to the Chief Justice of India (CJI) NV Ramana has been moved by Delhi-based Advocate Vineet Jindal and it further seeks a direction to the Government Of India to form a committee to address the issues related to doctors concerned.

Against this backdrop, the plea avers that since doctors are our frontline warriors against a war with covid, it is imperative to address the issues of resident doctors at the earliest to resolve their demands and to call off the strike as soon as possible.

"It is a sad state of affairs that the doctors once applauded and appreciated for their ceaseless efforts are now in a state of overburden and exhaustion and the appeal of these resident doctors seems to have fallen on deaf ears of the authorities who do not seem to be concerned about the shortage of healthcare workforce due to non-admission of fresh batch of resident doctors. Besides, these doctors are also deprived of their basic right of being professionally upgraded in every aspect. This would dampened the spirits of the doctors who have wholeheartedly devoted their lives in the nation's service and would prevent them from serving and performing their utmost even in case they are forcefully made to do so without keeping their genuine considerations in demand," the letter plea adds.

Calling the doctors as the nation warriors in this time of crisis, the letter plea adds that for the last two years, the doctors have given exemplary service in emergencies faced during Covid19 and were well applauded by the nation for their commendable efforts and devotion towards serving health care.

Importantly, the Federation of Resident Doctors' Association (FORDA) is leading the protest with a demand that NEET PG Counseling be conducted at the earliest so that the doctors who have qualified for PG Course exams may get admission in their allotted colleges.

Generally, the counseling for NEET PG takes place in March, however, due to COVID-19, the entire process got delayed in 2021 and even though the exams took place in September 2021, the Counseling process is yet to begin.

Against this backdrop, these resident doctors are protesting while referring to the state of acute shortage of doctors amidst an approaching third wave of the coronavirus pandemic.

It is equally important to note that the Central Government had assured the Supreme Court in October 2021 that the counseling for NEET-PG will not commence until the Court decides the validity of the Centre's decision to introduce reservation for the Other Backward Classes(OBC) and the Economically Weaker Sections(EWS)in the All India Quota (AIQ).