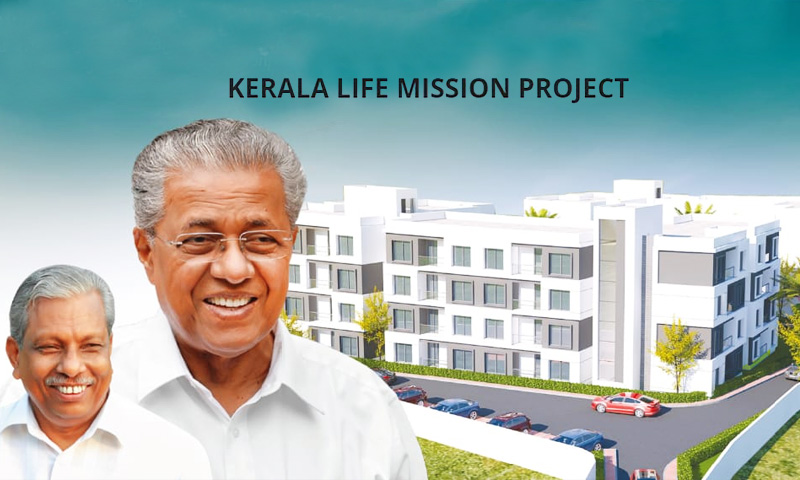 The Kerala High Court on Tuesday dismissed the petitions filed by the CEO of Life Mission Project of Kerala Government and Santhosh Eappen, the MD of the contractor company, challenging the CBI investigation into the case related to alleged corruption and FCRA violations in the construction of apartments for the homeless at Wadakkanchery as part of the LIFE Mission project.

The Court however held that the criminal liability of the non-political actors in the case cannot be extended to the political executive of the State, just because the crime was done while executing a policy decision of the government.

A single bench of Justice P Somarajan observed in the order :

"In the instant case, all these mischiefs were done during the implementation of the LIFE mission by permanent members of non-political executive attached to the IAS along with Swapna Suresh, Sandeep Nair and other accused. The mere fact that policy decision was taken by the CM and the ministers or the legislature may not be itself a sufficient ground to extend criminal liability for the wrong done by non -political actors and their allies to the political executive. Therefore criminal liability cannot be extended to political executive merely because they took a policy decision".

"It is an admitted case that LIFE mission is a state project based on policy decision of the State. The typical facts of the case show a crime committed in furtherance of MOU to evade audit and receive kickbacks. The fact that the crime was done in furtherance of the MOU suggests involvement of high officials in the case, a master mind".

With the dismissal of the petitions, the stay on the CBI investigation also stands vacated, the court noted.

On October 13 last year, a bench of Justice V G Arun had passed the stay order in the petition filed by U V Jose, CEO of the LIFE Mission Project, seeking to quash the FIR registered by the central agency alleging violations of the Foreign Contributions Regulation Act over the receipt of foreign contributions from the United Arab Emirates for the construction of housing units for the flood victims at a government plot in the Thrissur district. The bench had also considered a petition filed by Santhosh Eappen, the Managing Director of Unitac Ltd, the private builder, who was arrayed as first accused in the CBI FIR.

LIFE(Livelihood, Inclusion and Financial Empowerment) Mission' is a housing project mooted by the Kerala Government for the benefit of the homeless.

The issue relates to the project for the construction of 140 housing units in Wadakkanchery in Thrissur district. As per the application filed by the CEO in the HC, in 2019, the 'Red Crescent Authority' of the United Arab Emirates offered to sponsor the project and accordingly, a Memorandum of Understanding was entered into that year itself. As per the MoU, the sponsor was to execute the project through independent contractors.

Alleging that foreign contributions to the tune of 10 Lakh Arab Emirates Dirham were transferred to the private contractors - Unitac Ltd and Sane Ventures - in violation of FCRA norms, a legislator belonging to the Congress party, Anil Akkara, filed a complaint before the CBI on September 20.

After four days, the CBI registered the FIR under Section 35 read with Section 3 of the FCRA and Section 120B of the Indian Penal Code arraying the Managing Directors of Unitac and Sane Ventures as accused numbers 1 and 2 respectively.

Seeking to quash the FIR to the extent it relates to government officials, the government agency approached the High Court, raising the prime argument that the CBI could not have registered the case directly without the sanction of the state government.

To register the FIR directly, the CBI cited a notification of the Government of India, which empowered it to investigate FCRA offences. In this regard, the Kerala Government agency contended that FCRA was not applicable to the transaction, as government agencies are exempted from the ambit of the Act.

Further, the LIFE Mission did not receive any amount from UAE Red Crescent, and the contributions were given to the private contractor, which is also exempted from the FCRA being consideration received for contractual work, submitted Senior Advocate K V Viswanathan.

CBI's standing counsel, Sasthamangalam S Ajithkumar, had contended that the transaction was an 'eyewash' for corruption involving senior government officials. He argued that Unitac obtained the contract through the influence of Swapna Suresha and other accused in the gold smuggling case, who had links to M Sivasankar, the former Principal Secretary to the Chief Minister's Office.

In response to these allegations, Viswanathan submitted that CBI needs state sanction to investigate offences related to corruption, and cannot use the "subterfuge" of an FIR under FCRA to undertake such a "roving enquiry".