"It Is The Duty Of Central Govt To Ensure Hindrance Free Supply Of Oxygen, States Including UP Shouldn't Obstruct/Stop Oxygen Movement": MP High Court 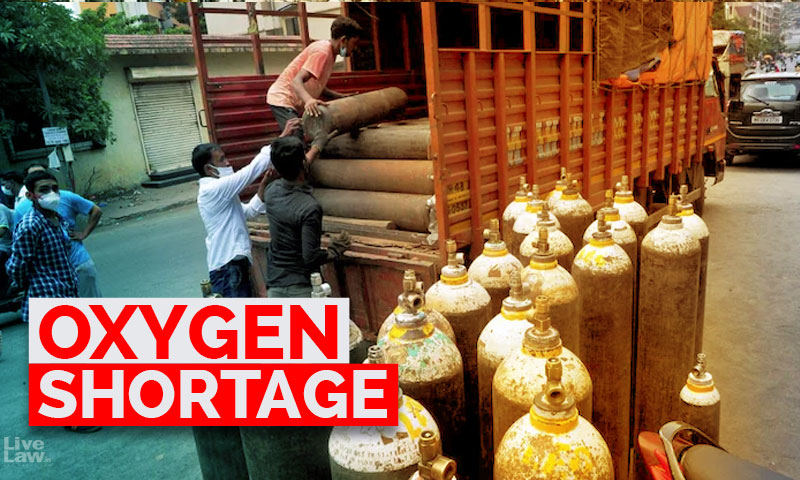 The Madhya Pradesh High Court on Monday (April 26) took into account 3 Interim Application filed in the suo moto Writ Petition, which was registered on the basis of a letter (dated 08.06.2020) sent by Dr. Ashwani Kumar, Senior Advocate, Supreme Court of India, New Delhi to the Chief Justice of India. Importantly, the Bench of Chief Justice Mohammad Rafiq and Justice Atul...

The Madhya Pradesh High Court on Monday (April 26) took into account 3 Interim Application filed in the suo moto Writ Petition, which was registered on the basis of a letter (dated 08.06.2020) sent by Dr. Ashwani Kumar, Senior Advocate, Supreme Court of India, New Delhi to the Chief Justice of India.

"In the opinion of this Court, it is the responsibility of the Central Government, which is allocating the quota of Oxygen to various States, to get its directives complied and ensure seamless and hindrance free supply of Oxygen to the destined places involving interstate movement."

The application for intervention was filed by Shanti Manch Samiti, inter alia, on the grounds of the scarcity of Oxygen, shortage of beds in the hospitals, and manipulation with the data of deaths and positive patients.

Allowing the same, the intervenor was permitted to intervene in the matter and make submissions. It was submitted that the Government of India had recently issued an order to convert the LPG tankers for transportation of Oxygen, on payment of charges of Rs.1,000/-, but the State authorities were not granting the requisite permission.

To this, the State Government submitted that the permission for conversion of few LPG tankers for transportation of Oxygen had already been granted by the competent authority and as of now, there was no such application pending with them. However, if and when any new application is received, the same shall be considered favorably.

This application was filed by Manoj Sharma, President of the High Court Advocates' Bar Association, Jabalpur inviting the attention of this Court towards an incident, which took place at a certain place near Varanasi.

According to him, an Oxygen Tanker that had started from Bokaro and was to reach Sagar in the State of Madhya Pradesh to provide Oxygen was stopped by the police authorities of the State of Uttar Pradesh and diverted to Jhansi.

Hearing this application, the Court observed,

"It is expected of every State including State of Uttar Pradesh, not to stop/obstruct the movement of Oxygen so as to divert the same to its hospitals, which as per the allocation made by the Central Government is meant for another State. Recurrence of such incident may lead to chaos and disrupt the timely supply of Oxygen to the hospitals, which is in the ongoing crisis very crucial to save lives."

This application was filed by the Amicus Curiae in which he sought compliance and praying for further urgent directions/orders necessary in the evolving situation related to COVID Management in the State of Madhya Pradesh.

This matter was heard for some time and thereafter, the Advocate General submitted that he shall file his response to this interlocutory application filed by learned Amicus Curiae and I.A. No.4353/2021 filed by Mr. Abhinav P. Dhanodkar, Advocate.

Thus, the Court directed the matter to be listed on 28th April 2021 on top of the list.