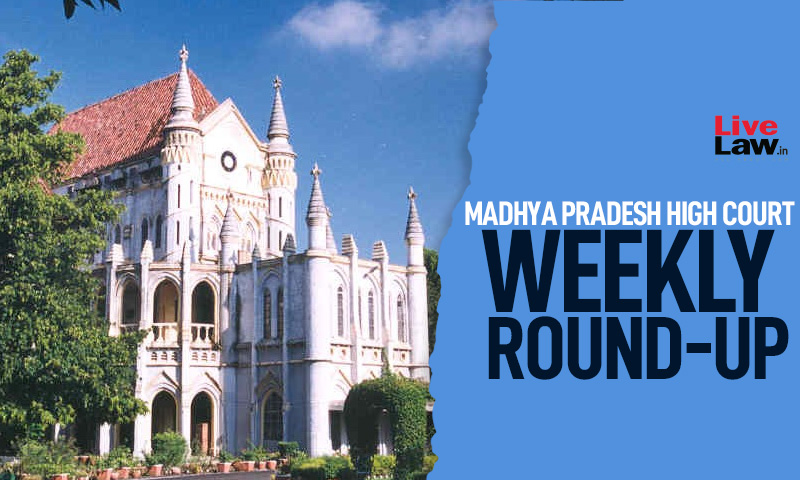 'Public Interest Also An Element On Consideration Of Which Employee Can Be Placed Under Suspension': Madhya Pradesh High Court

The High Court observed that public interest is also an element on the consideration of which an employee can be placed under suspension. The Court further held that even if it is alleged that the particular department of the employee did not suffer any loss due to him, the same cannot make him immune to suspension.

…it cannot be forgotten that if the respondent, a senior officer is reinstated by staying the suspension order, he can scuttle the inquiry or investigation or can win over the witnesses of the departmental inquiry. This is within the province of the disciplinary authority to decide whether an employee is required to be suspended or not because suspension is a step towards ultimate result of an investigation or inquiry.

Scope Of Article 300A Of Constitution Of India Isn't For Invoking It Against Any Action Of An Individual: Madhya Pradesh High Courtv

The High Court has observed that Article 300A of the Constitution of India acts as a protector of individual interest and a tool for the state for infrastructural and various other development. The Court also stressed its scope is limited to the state's action.

"The Article says that- No person shall be deprived of his property save by the authority of law. This means that nobody can be deprived of his right over property except if it is prescribed by law. This article emphasizes on the doctrine of eminent domain which means that the state can take over any private land if it is for public use. Therefore, the law prescribing the acquisition needs to be valid and the acquisition of the land by the state must be for a public purpose," the Court remarked.

A Party Cannot Directly Seek The Appointment Of The Arbitrator If The Agreement Provides For Pre-Arbitration Reference To A Competent Authority: Madhya Pradesh High Court

The High Court has held that the court cannot appoint the arbitrator when the petitioner has not complied with the condition precedent of referring the dispute to the Superintending Engineer.

The Single Bench of Justice Vivek Rusia has held the pre-arbitral steps to be mandatory, the non-compliance of which will result in the rejection of the application for the appointment of the arbitrator.

Trial Court Must Give Opportunity Of Hearing To IO Before Ordering Action For Allegedly Botched Up Investigation: Madhya Pradesh High Court

The High Court set aside the order passed by the trial court, directing the Superintendent of Police to take action against the Investigating Officer for an allegedly botched up investigation, observing that he was not given an opportunity by the lower court to explain his position.

Under the circumstances, the impugned order itself is violative of principles of natural justice as no opportunity was given to the petitioner to explain his position either before the learned trial court when he was being examined as a witness to the prosecution, where this court could have put questions and elicited answers to suggestions of a deliberately botched up investigation. Therefore, the petition succeeds and the impugned order/letter dated 27.4.2011 (Annexure A/3) addressed by the learned trial court to the Superintendent of Police, Panna, is quashed.

The High Court directed the trial court to issue direction against the Prosecutrix in a rape case to refund the compensation she had received from the State Government because she had admitted in her statement that she had lodged a false report against the accused.

Trial court will consider issuance of a direction against the prosecutrix to refund the amount received by her because she admitted in her examination in chief that she has lodged false report on account of some oral dispute between the parties. Therefore, alleged false report is lodged, therefore she is not entitled to keep the amount of compensation paid by the State government collected from the tax payer of the country. Thus, trial court will consider to direct the prosecutrix to refund that amount in the appropriate head of the treasury account.

The High Court bench of Justice Sheel Nagu and Justice Maninder S. Bhatti upheld the cancellation of GST registration as there was a delay of 18 months in filing the appeal without reasonable justification.

The petitioner company/assessee was registered under the Goods and Services Tax Act, 2017. On account of non-filing of a return, the GST number allotted to the petitioner was cancelled. Against cancellation, the petitioner preferred an appeal. The appeal was dismissed.

Updates from the High Court

The Madhya Pradesh High Court, Gwalior Bench recently recalled its order for cancellation of bail which was passed ex-parte, holding that the person enlarged on bail was not duly served notice and therefore he could not appear before the Court to contest the said application.

Justice Anand Pathak was essentially hearing an application under Section 482 CrPC moved by the Applicant to recall the impugned order, whereby his bail was cancelled under Section 439(2) CrPC.

Case Title: Sheelendra Kumar And Others Vs The State Of Madhya Pradesh And Others

The division bench of Justice S.A. Dharmadhikari and Justice Vishal Mishra further directed the MPPSC to make adequate amendments to the application process to facilitate the registration of Non-Domicile Category candidates –

In view of the aforesaid submissions made by learned counsel for the parties and with a view to provide equal opportunity to all concerned, it is directed that all the candidates not belonging to the State of Madhya Pradesh will be permitted to participate in the competitive examination in respect of State Engineering Services Examination, 2021 for which the Madhya Pradesh Public Service Commission shall make adequate amendment in the website and permit these candidates to fill up the application forms. If the need arises the Madhya Pradesh Public Service Commission shall consider and notify a new date for filing up the application forms giving them atleast seven days' further time to do the needful and thereafter notify a fresh date for conducting the examination.