Marriage Equality For Same-Sex Couples: The Delhi HC Says This Is Not an Adversarial Petition 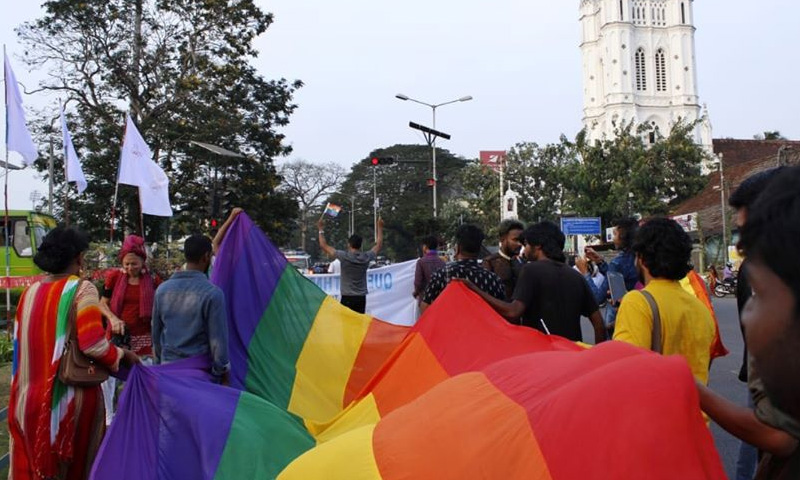 The Division bench of Justice Rajiv Sahai Endlaw and Justice Asha Menon at the Delhi HC on Wednesday heard the petition for Marriage Equality filed by two same-sex couples. Mr. Vaibhav Jain and his partner Mr. Parag Mehta were denied certificate of registration of their marriage by the Indian Consulate on the ground of sexual orientation alone while Dr. Kavita Arora and her partner...

The Division bench of Justice Rajiv Sahai Endlaw and Justice Asha Menon at the Delhi HC on Wednesday heard the petition for Marriage Equality filed by two same-sex couples.

Mr. Vaibhav Jain and his partner Mr. Parag Mehta were denied certificate of registration of their marriage by the Indian Consulate on the ground of sexual orientation alone while Dr. Kavita Arora and her partner Ms. Ankita Khanna were denied entry into the building of SDM, East Delhi when approached for seeking solemnization of their marriage under the Special Marriage Act. This petition was directed to be listed before the division bench by the single bench of Justice Navin Chawla on October 8, 2020.

Pursuant to thatdirection, the matter was heard by the Division bench of the Delhi High Court on Wednesday and the High Court has ordered for filing of Counter Affidavits and Rejoinders by the parties and listed the matter for next hearing on January 8, 2021.

Sr. Adv. Dr. Menaka Guruswamy, appearing on behalf of the petitioners, argued that in both the cases the authorities have acted in neglect of the Supreme Court's judgement in Puttaswamy and Navtej Singh Johar which guarantees right to human dignity and privacy to same-sex couples.

The act "amounts to disrobing the same-sex couples of their inherent dignity". She pointed out to the bench that the judgement in Puttaswamy had categorically pointed out that privacy and sexual orientation are prohibited grounds of discrimination and in Navtej Singh Johar the LGBTQI people were held entitled to protection under Art. 14, 15, 19 and 21 of the Constitution of India. She argued that in the present matter the authorities in question had acted in a manner that had resulted in stripping off the petitioners of their rights which the Constitution of India and number of constitution benches of the Supreme Court have held "inheres in them an inherent dignity and an expectation of constitutional morality".

The bench had raised its concern pertaining to the issue of the concept of marriage having its origins in the customary laws and there being no definition of marriage under any existing law. Furthermore, it also pointed out to the availability of alternative remedy in the form of an appeal available to the petitioner under the Foreign Marriage Act.

Replying to the queries Sr. Adv. Dr. Menaka Guruswamy read the communications received by the petitioner from the Indian consulate denying them certificate of registration on the ground of the same being prohibited under the Consulate Guidelines however, the same were not shown specifically to the petitioners. In response to the letter written by the petitioners to the Consulate General, they were told that the Supreme Court judgement in Navtej Singh Johar had only dealt with decriminalization of Sec. 377 of IPC and had not provided for a right to marriage. Guruswamy however contended that right to marriage was not customary but was entrenched as a statutory right.

Sr. Adv. Dr. Guruswamy relied on the judgement of Osnat Alis v. UOI to argue that in this judgement the court had relied on Harbanslal Sahnia to hold that rule of exclusion of writ jurisdiction by availability of an alternative remedy is a rule of discretion and not one of compulsion. Secondly, the provision of appeal under Section 17 would only be available if there is an order by the Marriage Officer refusing to register a marriage and not in absence of such order. She pointed out that in the present matter there was no such order as petitioner were denied participation in the registration process itself and hence the question of appeal would not arise. She also argued that the Special Marriage act only provides the grounds on which marriage is prohibited and writ remedy lies as they are also challenging provisions of the Special Marriage Act. She argued that Puttaswamy and Navtej Singh Johar had indeed recognised right to marriage within the ambit of Article 21 and the petitioners in the present case were being denied the same quoting the paragraphs from the judgement authored by Jus. Nariman and Jus. Dipak Misra respectively. She concluded are submissions with an appeal that the petitioners were demanding to be recognised as equal citizens of this country.

The counsel for UOI submitted that this situation demanded an analysis of the history of Sanatan Dharma to which the court pointed out that laws of this country are gender-neutral and this was a matter of rights of the citizens of the nation and this matter is not adversarial. The bench also enquired if there were any similar matters pending before other benches of this court to which Sr. Adv. Dr. Guruswamy replied in negative highlighting the difference between the PIL challenging the Hindu Marriage Act pending consideration where parties themselves were not affected but in this case the petitioners are themselves the affected parties. The Court will now hear this matter on January 8, 2021.

UOI: This is a peculiar situation, we need to look at this history of Sanatan Dharma

Court: Please try to interpret the law in favour of the rights of the citizens of the 'Sanatan Dharma' country. The law is gender-neutral, don't see this petition as adversarial