MCGM's Action A Consequence Of Displeased Influential Persons In Power Angered By Certain Causes Being Taken Up By Petitioner; Kangana Ranaut Seeks 2 Cr In Damages 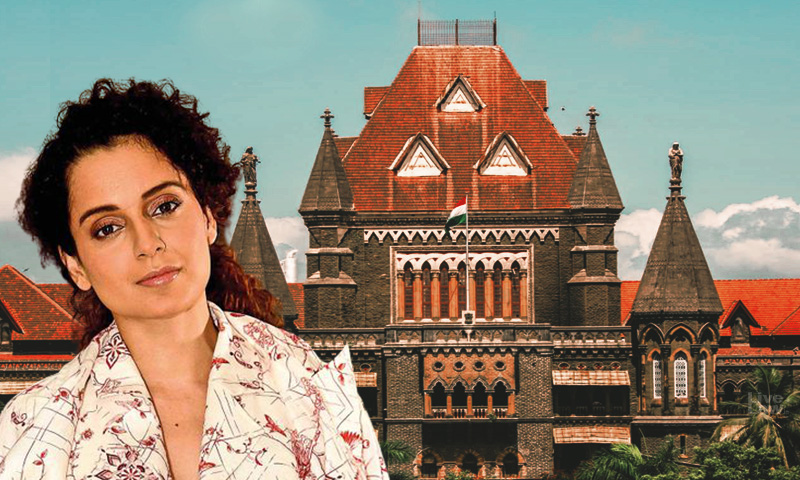 In an amended petition filed before the Bombay High Court on Tuesday, actor Kangana Ranaut contended that the action taken by the Municipal Corporation of Greater Mumbai (MCGM) in demolishing 40 percent of her bungalow at Pali Hill in Bandra, which she used as an office space, was borne out of vendetta against her as those in power in the state as well as the MCGM "are displeased and angered by the causes taken up by her."

The actor has sought Rs.2 crore in damages caused to her due to MCGM's action of demolition carried out on September 10.

Division bench of Justice SJ Kathawalla and Justice RI Chagla had in the previous hearing allowed petitioner's counsel Advocate Rizwan Siddique to amend the petition filed by her challenging MCGM's order of demolition.

The petitioner contended that "the entire action initiated by MCGM officials was a counterblast and a consequence of the displeasure of influential persons who are in power who are displeased and angry by certain causes being taken up by petitioner."

Refuting the civic body's allegation that unauthorized construction and alterations have been made at her bungalow which she bought in 2017, the amended petition states-

"Before undertaking and/or commencing any kind of interior work and structural repairs in the said bungalow, the petitioner had duly made an application vide her letter dated October 3, 2018 to MCGM seeking permission for structural repairs and mentioning therein the following:-

(i) That since the building is 42 year old structure, the Petitioner had carried out structural audit of the said bungalow through a structural consultant;

(ii) That as per the report submitted by the structural consultant, the building falls under C2-B category.

(iii) That since it was not a good condition, the petitioner would like to carry out repairs by structural audit under the supervision and guidance of the structural auditor;

Consequently, MCGM permitted the petitioner to carry out the structural repairs as recommended by their structural consultant to the consultant's fullest satisfaction and submit the structural stability certificate to MCGM once the work is completed.

In a second letter, MCGM informed the petitioner that no permission was required for carrying out tenantable repairs under section 342 of the Mumbai Municipal Corporation Act and that however, since the petitioner's structural consultant has recommended structural repairs being C2B category row house, the petitioner undertook the same under the supervision and guidance of the structural consultant. Copies of the responses dated October 30, 2018 given by MCGM to the said Application made by the Petitioner were also annexed.

"The Petitioner as a public spirited person, consistently airs her views regarding issues of public importance on Social Media platforms, some of which at times is critical regarding the affairs and conduct of the administration and Government of the day.

In recent times, the Petitioner has been at loggerheads with the Government of Maharashtra regarding her views over the handling of certain issues which impact the public in general. The expression of use by her has displeased certain quarters and caused angst in certain quarters particularly a political party which is a part of the government in Maharashtra.

In view of various threats been given to the Petitioner, including threats of harm if she entered Mumbai, the Petitioner was compelled to seek the assistance/security and was given protection by Central Government in nature Y-plus category of CRPF security and the Petitioner could only come to Mumbai under protection. It is pertinent that the same political party is also the ruling party in the Municipal Corporation."

It is further argued in the amended plea that even before the order of demolition was pasted on the said bungalow, officials of MCGM were already present at the actor's bungalow in Bandra's Pali Hill-

"This conduct of the Respondent No.1 and its officials demonstrates that they always had pre-meditated malafide intentions and ulterior motives to demolish the said bungalow".

Finally, seeking compensation of Rs.2 crores towards damages caused to her, Kangana has alleged -

"The Respondent No. 2 and the officials of the Respondent No. 1 demolished about 40% of the Petitioner's property including the valuable movable property of the Bungalow, like chandeliers, sofa, rare arts-works before the petitioner's advocate obtained stay from this Hon'ble Court."

In conclusion, the petition argued that the whole intention of the respondents and reason for invocation of section 354A under the MMC Act, was to deprive the petitioner a fair opportunity to respond to the Impugned Notice. Thus, the petitioner sought quashing of the demolition order.