Morbi Tragedy| An Inference Could Be Drawn That There Was A Collusion Between M/s Ajanta & Civic Body: Gujarat High Court 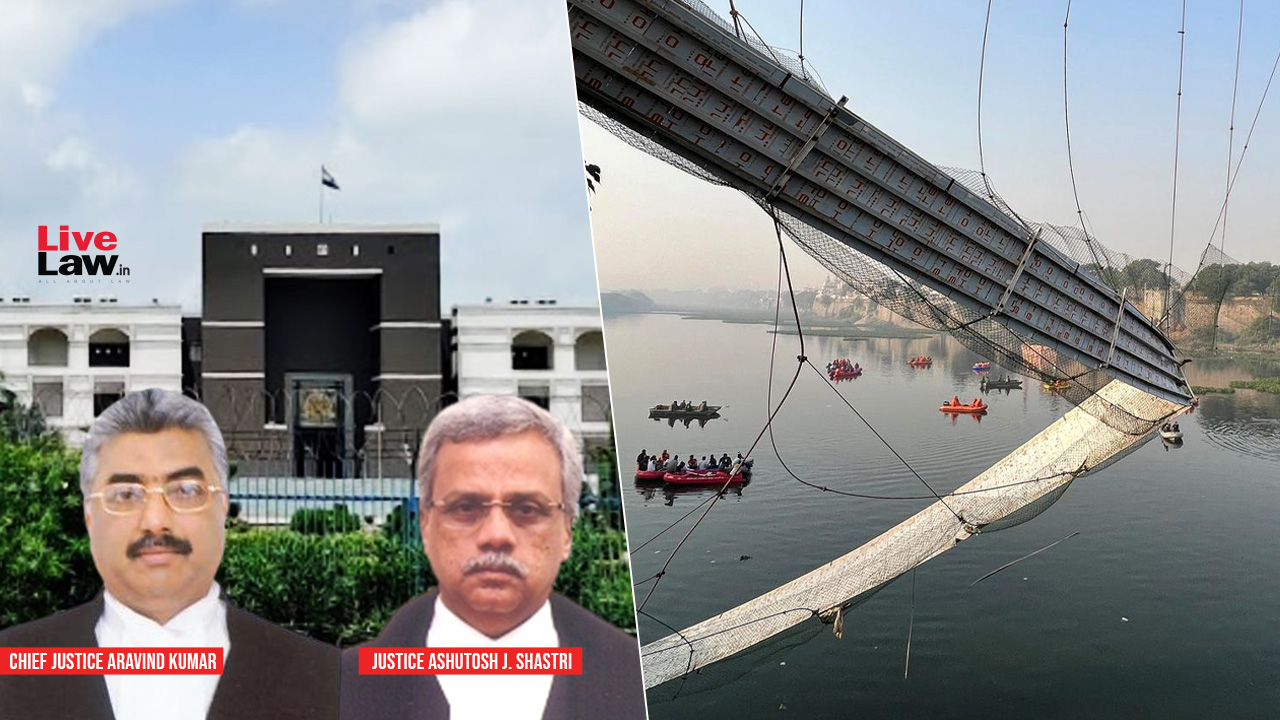 In the ongoing hearing pertaining to suo motu PIL plea initiated over the Morbi Bridge Collapse incident which took away the lives of 135 people in October 2022, the Gujarat High Court today remarked that an inference could be drawn that there existed a collusion between the Civic Body and M/s Ajanta, the company which managed the bridge before it collapsed.

The oral remark was made by the bench of Chief Justice Aravind Kumar and Justice Ashutosh J. Shastri after the ASG Devang Vyas, appearing for the Morbi Civic Body submitted that the body told the M/s Ajanta (on Jan 19, 2022) that if it is not agreeing to maintain the bridge on the existing terms conditions, it may hand over the bridge to the body.

To this, Chief Justice Aravind Kumar, having perused the affidavit of M/s Ajanta, said: "Why did you not take the bridge over? It is your bridge. You are concerned about the safety of your public. Why didn't you take it over from Ajanta?...Look at their (Ajanta's) tenor (regarding putting a condition that they don't want any government interference in repair work). They are threatening you (civic body)."

The #GujaratHighCourt begins hearing a suo motu PIL plea pertaining to the #MorbiBridgeCollapse incident of Oct 2022 which took away the lives of over 135 people.
The matter is before a bench of Chief Justice Aravind Kumar and Justice Ashutosh J. Shastri.#MorbiTragedy#Morbi pic.twitter.com/xhzaGKQsNE
— Live Law (@LiveLawIndia) January 25, 2023

Further, when ASG Vyas further submitted that the company opened the bridge for public use on its own without informing the civic body or the state government and that no fitness certificate was provided by the Contractor to us regarding the condition of the bridge, holding a capacity, etc, Chief Justice Kumar orally remarked thus:

"What were you (civic body) doing? You are an instrumentality of the state, you are equipped with law, why did you allow them to open the bridge?... An inference can be drawn, subject to what you say further, but it appears there was collusion between you two."

The bench also noted that the bridge was being used by M/s Ajanta despite there being no approval for its utilization by the civic body or the State government and further, when the agreement for its maintenance was signed on March 8, 2022, the same was also not approved by the General Body of the Morbi Civic body.

Further, the Court also took into account the affidavit submitted by the State Government answering the Court's query regarding the number of total bridges in the state and the status of their maintenance. The State, in its affidavit, submitted that minor repairs were required in 40, and major repairs are required in 23 bridges (in all 63), and out of 63, in 27 bridges, repairing work is done.

Recording that the repair work in respect of 27 bridges is already completed and the remaining 37 bridges is underway, the Court asked the state to complete the repair on a war footing basis so as to avoid any untoward incident and file a reply in this regard. The Court further directed the state to specify, on affidavit, the repairs carried out on all 63 bridges.

With this, the matter has been posted for further hearing on February 20.