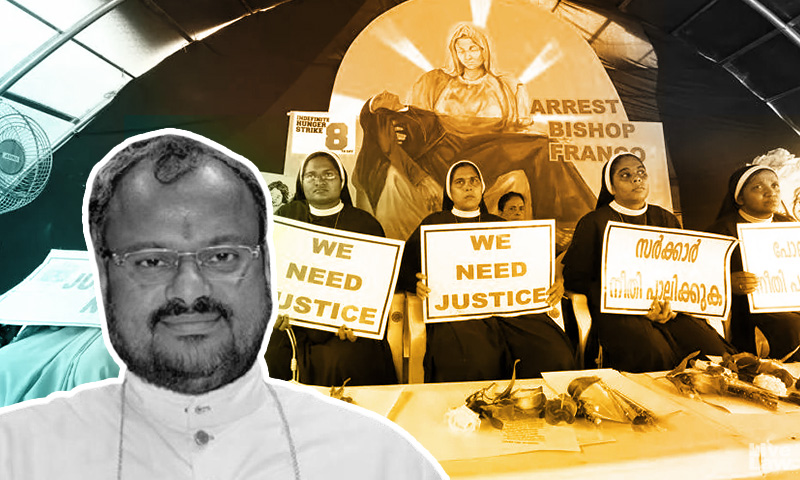 The Kerala High Court on Tuesday admitted the appeal filed against the decision of the Additional District and Sessions Court acquitting Bishop Franco Mulakkal of the Catholic Church in the nun rape case.A Division Bench of Justice K. Vinod Chandran and Justice C. Jayachandran also issued notice to Mulakkal.Franco Mulakkal, the Bishop of Jalandhar, was accused of raping a nun from...

The Kerala High Court on Tuesday admitted the appeal filed against the decision of the Additional District and Sessions Court acquitting Bishop Franco Mulakkal of the Catholic Church in the nun rape case.

Franco Mulakkal, the Bishop of Jalandhar, was accused of raping a nun from the Missionaries of Jesus convent in Kuravilangad. The survivor alleged that Franco raped her 13 times during his visits to the convent between 2014 and 2016.

The Additional District and Sessions Court in Kottayam had in January acquitted Mulakkal in the case finding the survivor's testimony to be unreliable.

The prosecution has urged that the evidence of the survivor, corroborated by those of 8 other prosecution witnesses and the documentary evidence proved that the naive nun was subjected to unnatural offence against the order of nature and rape by the accused who wielded power and control over the St. Francis Mission Home, on different dates for the period from 6/5/2014 to 23/92016.

The appeal has narrated the entire chain of incidents that led to the case being filed while emphasising that the accused abused his power, authority and position to take advantage of the survivor against her will and then went on threatening her that if she attempt to disclose the incident to anyone, she would be eliminated.

The prosecution alleges that she was raped repeatedly 13 times from 5/5/2014 to 23/9/16 at the guest room where Mulakkal stayed. It was when she could not stand the traumatic ordeals and her vow of chastity being destroyed repeatedly that she finally confessed of having been raped by her superior.

It has been submitted that she finally gathered the strength to do so by participating in different meditations and that she later took a firm stand not to allow the accused to stay in the said guest house. At this juncture, it is contended that the accused started retaliatory actions by filing false cases against her in several places, even in Punjab.

The prosecution submitted that the trial court concluded that she was not a reliable, sterling witness and found impossibility to separate 'chaff from grain' since they were inextricably woven up and rejected the evidence in toto, to give unmerited acquittal to the accused.

It has been vehemently asseted that this acquittal was a result of the failure to appreciate the evidence of the prosecution in the correct perspective. The appeal also stated that the trial court misconstrued facts and law and gave unwarranted acquittal to the accused, absolving him from all the grave charges framed against him.

As such, the State sought leave to file the appeal against the 'patently wrong, manifestly erroneous and totally perverse' judgment and to set aside the unmerited acquittal of the accused in the interest of justice.

Senior Advocate S. Sreekumar will be representing the survivor in the appeal before the High Court.

Mulakkal had earlier denied the charges as "baseless and concocted", and insisted that the nun had made the allegations as the Catholic order had rejected her demand for favours.

While the trial began in November 2019, it got delayed and was finally completed on Monday, January 10, 2022. It was an in-camera trial and the media was prohibited from reporting details about the trial, as per Bishop Franco's counsel's request.

Timeline of the Nun Rape case:

In June 2018, a nun of the Catholic Church had raised allegations that Bishop Franco had sexually assaulted her on several occasions. This led to an FIR being registered on June 28 under Section 376, IPC. The nun also gave a statement to Magistrate under Section 164 of the Code of Criminal Procedure.

Allegations surfaced for the first time in July 2018 when a collective called "Save Our Sisters" launched public protests calling for Franco's arrest.

Although the nun had first approached several higher officials in the church – including the Pope's office – accusing Bishop Franco of predatory behaviour, her complaints were overlooked. The survivor then filed a complaint with the police in June 2018 and a case was registered under various sections of the Indian Penal Code for rape and sexual assault.

Later on, in August 2018, a plea was filed before the High Court alleging that there has been no move to interrogate or arrest the accused and seeking a directive to arrest Franco Mulakkal. This was disposed of by the Court noting that the investigation was proceeding on the right track.

After two more PILs with similar prayers were moved in September 2018, the Court had sought a status report on the investigation in the case.

Soon, on 22nd September 2018, Franco Mulakkal was remanded to police custody for further interrogation by the Judicial First Class Magistrate, Pala for two days after three days of interrogation.

Within two days, he was remanded to judicial custody by the Judicial First Class Magistrate, Pala till October 6. He was accordingly taken to Sub Jail, Pala on September 24, 2018.

On October 3, 2018, the Court refused to grant him bail noting that there existed a prima facie case against the accused and that it was a premature application since the investigation was steadily progressing in the matter even after his arrest.

However, on October 15, 2018, the High Court released Franco on conditional bail recording that the investigation had progressed to the final stages. The Bishop was directed to surrender his passport and not to enter the State except to appear before the probe officer once in two weeks on Saturdays. The conditions were made applicable till a chargesheet was filed in the case.

On March 16 2019, Franco preferred a discharge plea before the trial court seeking to release him from the rape case under Section 227 of the CrPC, but this was declined.

After a brief holdup, on April 9 2019, the Kerala police filed its chargesheet against Mulakkal alleging that he had raped the survivor-nun on several occasions over a period of two years. This was the first time in the history of the Catholic Church in India that a clergyman of the rank of a Bishop was named accused in a police final report.

Meanwhile, challenging the order of the trial court, he moved the High Court, but his plea was again rejected accepting the prosecution's argument that there was prima facie evidence against Mulakkal on July 7 2020.

Thereafter, on July 25 2020, Mullakkal approached the Supreme Court challenging the High Court judgment rejecting his plea seeking to discharge him from the rape case. He again claimed that he was innocent and that he was falsely implicated after he questioned the financial dealings of the victim nun.

However, noting that there was no cause for discharge, the Apex Court declined this request as well. The survivor and her supporters have encountered resistance and even threats from influential persons within the Catholic establishment who persisted to defend the priest.

Notably, Sister Lucy Kalappura, who had participated in protests against Mulakkal was evicted from her convent.

When she approached the High Court in July 2021 seeking police protection, the convent had submitted a decretum issued by the Supremum Tribunal Signaturae Apostolicae which ended her right to remain a part of the congregation.