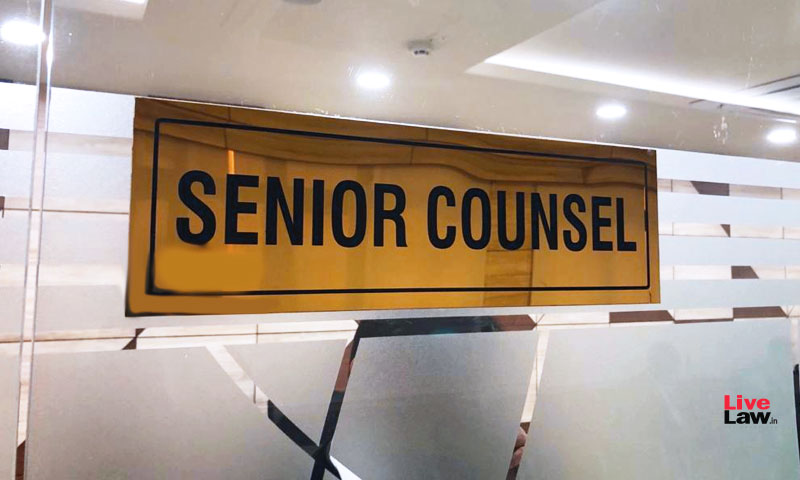 The National Litigants Association has moved the Bombay High Court against the practice of Judges designating lawyers as Senior Advocates. The plea has been filed in wake of the recent decision of the Bombay High Court to designate 22 lawyers as senior. A notification in that behalf was issued by the Appellate Side of the high court on February 10, 2020. The Petitioner has pointed...

The National Litigants Association has moved the Bombay High Court against the practice of Judges designating lawyers as Senior Advocates.

The plea has been filed in wake of the recent decision of the Bombay High Court to designate 22 lawyers as senior. A notification in that behalf was issued by the Appellate Side of the high court on February 10, 2020.

"The notification is nothing but a charter of who's who, how he is connected to the Judges and the powerful lobby of elite class lawyers. The notification is an unmistakable declaration that, in the matter of designation of a lawyer as a Senior Advocate, all that matters is kinship, connections and lineage, to say the least," the plea read.

He has thus sought that the notification dated February 10 be quashed for being unconstitutional and void for the added reason that the said selection was wholly non-transparent, opaque, arbitrary and unfair.

The petition impleads the Chief Justice of the Bombay High Court as a Respondent, to represent the Full Court, apart from the Registrar and 22 designated senior Advocates.

On a broader aspect, the Petitioner has challenged Section 16 of the Advocates Act that classifies Advocates into two categories- senior advocates and other advocates.

He has submitted that such a classification renders the other Advocates as mere "underdogs". He pointed out that almost 90% of cases where a designated Senior Advocate appears, the Court has always granted the interim relief sought for, whereas where an ordinary lawyer has appeared, no such order is granted.

"In short, the system of designation of a lawyer as a Senior Advocate, which results in denial of interim orders where a litigant is represented by an ordinary Advocate and the opposite where he engages a Senior Advocate, means complete denial of justice, which fact is beyond dispute.Such a scenario is the most scandalous one and that alone establishes that unless and until the said system is abolished and all lawyers are treated alike, there shall never be justice or fair play," he submitted.

The Petitioner has also challenged Section 23(5) of the Advocates Act that provides a right of pre-audience to Senior Advocates over other Advocates.

He has asserted that such division/classification of lawyers into two classes and discriminatory treatment of affording pre-audience to one class of lawyers is violative of the equality under Article 14 of the Constitution as well as Articles 19 and 21.

He has contended that the system of designation of a lawyer as a Senior Advocate is the single reason for the erosion of the public faith in the justice delivery system.

"The pure stream of justice which we inherited from the British came to be polluted and the common man's trust in the institution came to be eroded to no insignificant extent only because of the pernicious system of classification of lawyers into two categories or classes, namely, the elite dynasties and the ordinary lawyers, the underdogs," he remarked.

He went on to state that even the striking down of the Constitution (Ninety-ninth Amendment) Act, 2014 and the National Judicial Appointment Commission Act, 2014, to uphold the present Collegium system in appointment of judges was a "calculated and dishonest" move by the elite class of lawyers in Delhi.

"They used the Supreme Court Advocates-on-Record Association as a pawn to attack the NJAC on the specious premise that the independence of judiciary is at peril. The reality was that NJAC was indeed a mini collegium with the Chief Justice of India being the Chairman and the two senior-most judges being its members, in other words, judges constituting to be 3 out of the 6 members. The judiciary had absolute predominance. The Government, the executive accountable to the people, had only a sole representative in the Law Minister as the sixth member and convener of the NJAC," he submitted.

The Petitioner has thus prayed that the very concept of designation of a lawyer as Senior Advocate be declared unconstitutional. He has also prayed that the prevailing separate dress code for Senior Advocates be done away with and the Bar Council of India be directed to provide for a dress code common to all lawyers, considering the need to depart from the current dress code, "a relic of the Colonial past".

The Petitioner will be represented by Advocates Rohini Amin, Preeti Dambre and Maria Nedumpara.