A plea has been filed in the Delhi High Court challenging the appointment of eleven Special Public Prosecutors for conducting cases pertaining to the riots that took place in the northeast districts of Delhi. Moved by Delhi Prosecutors Welfare Association, the writ petition challenges the notification dated 24/06/20 issued by the Delhi Government whereby eleven Special Public...

A plea has been filed in the Delhi High Court challenging the appointment of eleven Special Public Prosecutors for conducting cases pertaining to the riots that took place in the northeast districts of Delhi. 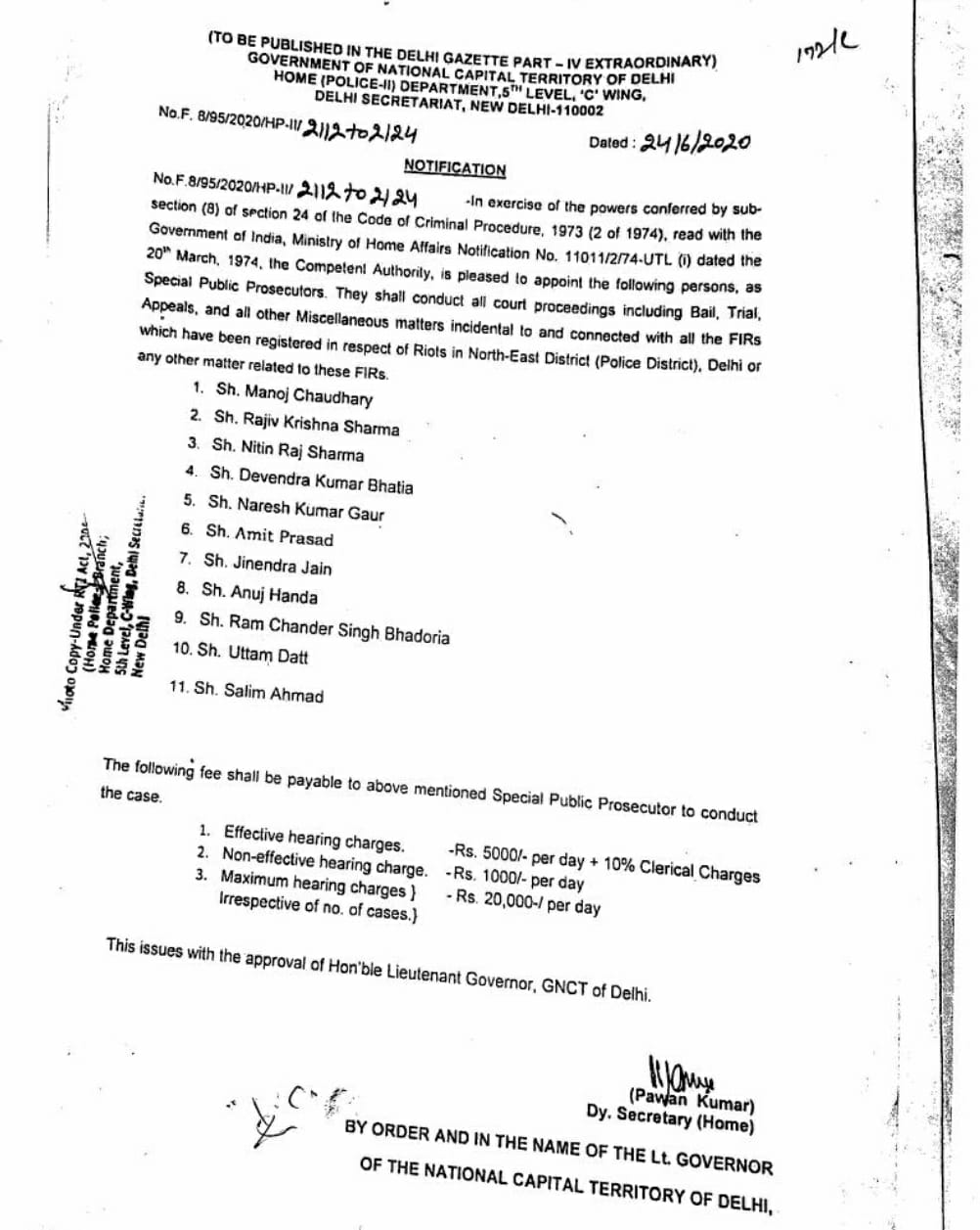 The notification challenged in the petition

The petition also seeks a direction to be issued to the Delhi Government to appoint independent Special PPs, respecting the principles of fairness and impartiality.

It is the case of the Petitioner that the current cohort of Special PPs have been appointed on the recommendation of the Delhi Police, which violates both section 24 of the Criminal Procedure Code as well as the law laid down by the Supreme Court.

It is contended that the impugned notification is unsustainable as it  has been issued by the Lieutenant Governor of Delhi without the aid and advise of the Delhi Government. The petitioner argues that as per the interpretation given by the Supreme Court to Article 239AA of the Constitution, the L-G of Delhi cannot take a unilateral decision for the appointment of prosecutors.

It is further argued by the Petitioner that these appointments violate Article 21 of the Constitution which guarantees free and fair trial to every accused person.

The appointment of the 11 SPPs on the recommendations of Delhi Police "is a divergence from the principles of free and fair trial which is part of Article 21 of the Constitution", stated the plea.

According to the petition, the proposal of Delhi Police to appoint SPPs was rejected by the Delhi government which decided to appoint SPPs from the empanelled advocates.

A revised proposal forwarded by the police was also rejected by the Delhi government, adding that subsequently, the Lt Governor intervened in the issue and decided to proceed with the names recommended by the police.

It said that this led to a difference of opinion between the LG and the Delhi government and the issue was referred to the President who approved the names suggested by the police.

In view of the Presidential approval, Delhi government issued the June 24 notification appointing the SPPs recommended by the police, the petition states.

The plea claims that the association sent a representation to the Delhi government against the appointment of the SPPs, but no action was taken.

The present petition has been moved through Advocates Aditya Kapoor, Kushal Kumar, and Manika Goswami.

On July 31, the LG had appointed Solicitor General Tushar Mehta and five Additional Solicitor Generals as Special Public Prosecutors to conduct court proceedings arising out of 85 FIRs registered in relation to protests against Citizenship Amendment Act 2019 and the riots which occurred in North East Delhi in the last week of February.

The appointment of Special Prosecutors in cases related to Delhi riots has been a bone of contention between the Delhi Government and the Delhi-LG. The peculiar situation arose as the Delhi Police is reporting to the Union Ministry of Home Affairs.

In February, the appearance of Solicitor General, Tushar Mehta, in Delhi High Court in a case seeking investigation into Delhi riots had created a controversy, after Rahul Mehra, Standing Counsel of Delhi Government, objected to it by saying that appointment of Prosecutors was the sole preserve of Delhi Government. The objection was on the ground that LG can appoint Prosecutors only on the aid and advise of the Delhi Government.

Following that, on February 27, the Lieutenant General of Delhi passed an order appointed Solicitor General Tushar Mehta to represent Delhi Police in the case filed by Harsh Mander.

On May 29, the Home Department of Delhi Government approved the appointment of Solicitor General, ASG Maninder Acharya, ASG Aman Lekhi, Standing Counsel (UOI) Amit Mahajan, and Advocate Rajat Nair, as Special Prosecutors in a case related to Delhi riots(Aqil Hussain vs State of NCT of Delhi).