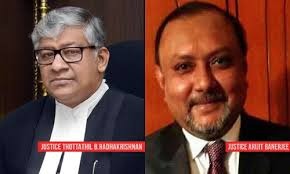 While hearing a PIL related to the progress made by the State Government it in terms of tackling the menace of COVID-19 pandemic, the Calcutta High Court cautioned the media to dissuade itself from "irresponsible reporting". The remarks were made by a division bench led by Chief Justice Thottathil B. Radhakrishnan, when the state government pointed out that the PIL was a...

While hearing a PIL related to the progress made by the State Government it in terms of tackling the menace of COVID-19 pandemic, the Calcutta High Court cautioned the media to dissuade itself from "irresponsible reporting".

The remarks were made by a division bench led by Chief Justice Thottathil B. Radhakrishnan, when the state government pointed out that the PIL was a "Publicity Oriented Litigation", being used by the Petitioner to publicize his political identity and encash it for enhancing his popularity in public domain.

The bench remarked that its orders were available in public domain and it expected the media to report them responsibly.

The bench cautioned that all the orders were being publicized on the High Court website and anyone involved the media, in need of information, could verify the contents of the Court's orders, so as to "dissuade themselves from propagating or publicizing the orders to champion the cause of anybody concerned".

"Let it also be taken note of that the orders issued by the High Court are being uploaded in the official website. This means that a true version of any order can be generated from the website of the Calcutta High Court. We are sure that responsible journalism includes the need to exclude irresponsible reporting by anyone involved in the print or audio visual media. Obviously, therefore, we expect those in need of information about the contents of this Court's orders, to access the High Court website and dissuade themselves from propagating or publicizing the orders to champion the cause of anybody concerned," the bench also comprising of Justice Arijit Banerjee said.

Not an adversarial trial

The issue of the petition being politically motivated was first raised by the State Government last week. At that point, the bench had deferred the issue while stating that "the question raised and which may arise on the basis of the materials on record prompts our conscience to have a deeper look into the materials that are being produced on behalf of the State Government".

Reiterating its stance on Tuesday, the bench said,

… We may also record that this matter is to be proceeded with ultimately in the interest of the larger public in the collective sense and for a citizen in the individual sense and not intended to be made a platform for publicity either way."

On the merits of the case, the bench directed the State and the Central Government to file an affidavit disclosing the availability of PPE and testing facilities in terms of ICMR guidelines in the State of West Bengal.

The direction was made after the bench noted that two doctors in the state had died due to Covid-19.

"Advocate General to ascertain the availability of Personal Protection Equipment (PPE) sufficient enough to be provided to all who could be called front line worriers which includes doctors, para medics, ground staff, support staff and those dealing with medical institutions and also other areas where PPE usage ought to be the norm. The Union of India is also require to respond as to its view on the management of Covid-19 in the State of West Bengal," the bench directed.

On the issue of deficit in the number of sample testing being done in the State, the bench remarked that "there is lack of certainty as whether the rapid testing method as well as other modalities are appropriately utilized."

Stating the same to be a "matter of governance", the issue was left at the disposal of the Governments.

"The Indian Council of Medical Research is concerned with the modulation, formulation and promotion of bio medical research and is funded by the Government of India. Obviously it is reckoned as the platform for regulating the modalities of reaching out at various challenges to health issues…The testing of samples, test kits, mode of reference for ascertaining reason for death thereby keeping track of mortality rate attributable to Covid-19, are matters relating to scientific management of the pandemic. The Union of India and the States are to respond to the adequate guidelines given by the ICMR and/or other Agency as may be found necessary by the Union of India," it observed.