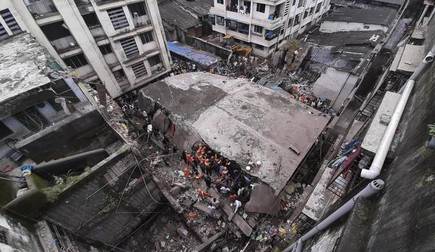 Taking suo motu cognizance of the building collapse that took place in Thane's Bhiwandi area where the death toll has risen to 41, the Bombay High Court expressed pain and sadness at the loss of lives. Court issued notice to the State and Municipal Corporation of Greater Mumbai.Division bench of Chief Justice Dipankar Datta and Justice GS Kulkarni appointed Senior Advocate Sharan Jagtiani...

Taking suo motu cognizance of the building collapse that took place in Thane's Bhiwandi area where the death toll has risen to 41, the Bombay High Court expressed pain and sadness at the loss of lives. Court issued notice to the State and Municipal Corporation of Greater Mumbai.

The said building known as 'Jilani Building' at Bhiwandi collapsed at about 3 am on September 21, 2020. Court noted that as per reports this building was not included in the list of dangerous structures so notified by the Bhiwandi Nizampur Municipal Corporation. Moreover, in the past three years, several notices were issued in respect of this building by the Municipal Corporation and the land owner/developer of the building, Sayyed Ahmed Jilani was called upon to get the building vacated due to its dilapidated condition. Last such notice is reported to have been issued in February 2020.

Noting that such incidents of building collapse happen every year especially during monsoons, Court said-

"This incident is not a solitary incident. Earlier to this, in the month of August, a three storey building known as "Tariq Garden" in the Mahad Town (Raigad District) had collapsed in which 16 persons were reported to have died including two senior citizens.

Some of the immediate questions the bench asked are:

(I) As to whether the municipal bodies are completely helpless to prevent such collapses and prevent loss of lives?

(II) Is there not any machinery available with such municipal bodies to prevent such occurrences?

(IV) Is there any procedure to identify such buildings which are likely to collapse?

(V) Is there a mechanism in place for structural audit of the buildings?

(VI) Isn't there a need for a uniform mechanism in this regard applicable to these Municipal Corporations?

(VII) Is there a mechanism to fix accountability on the concerned persons, for not taking any action against illegal construction?

(VIII) Has any survey been conducted regarding unauthorised structures/buildings in each of the Municipal Corporation areas and what steps are contemplated to raze the same?

(IX) Whether or not, there is a need for setting up a public grievance cell where citizens can take their complaints ?

Finally, issuing notice to MCGM and other Municipal Corporations in the city, Court noted-

"We are of the prima facie opinion that the right of the citizens to live in safe buildings and environment would be a facet of the right guaranteed by Article 21 of the Constitution of India and it would be the duty of the civic bodies to bring about a situation that all buildings within their respective municipal jurisdictions are legal, sustainable and safe.

Also, in our prima facie opinion, it would be an absolute obligation of the Municipal Corporations and its officers and more particularly the Ward officers within whose jurisdiction such buildings are located and who are presumed to have complete knowledge of the conditions of the building, to take timely steps. If at the grass-root level such officers were to take effective and timely actions, such fateful incidents which have presumably occurred due to inaction and gross negligence, could have been prevented."

The next date of hearing in the matter is October 15.