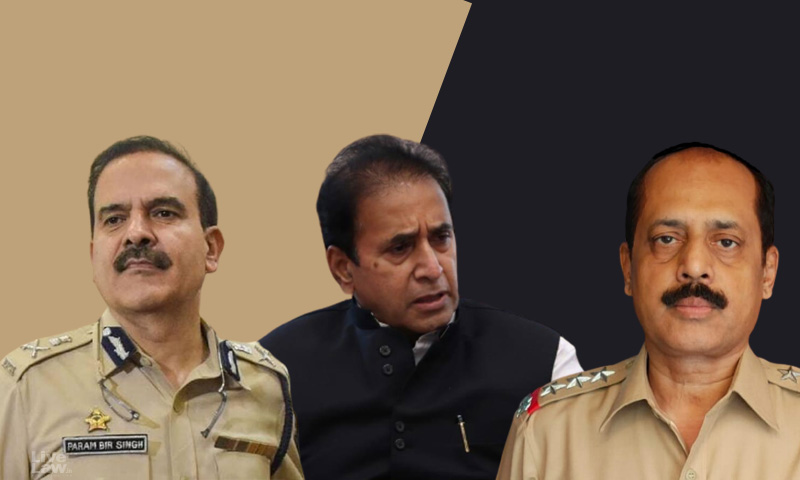 Special Judge PR Sitre also extended Waze's NIA custody till April 9 in connection with the explosives found near Mukesh Ambani's House and the consequent murder of businessman Mansukh Hiran. The CBI will question Waze while he is in NIA's custody. Waze was arrested by the NIA on March 13.

The CBI registered a Preliminary Enquiry on Tuesday, following the Bombay High Court's order on a clutch of PILs seeking an independent probe against the minister.

"Interest of justice will be done if the director of CBI is allowed to conduct a preliminary inquiry," a division bench of Chief Justice Dipankar Datta and Justice GS Kulkarni observed while disposing of the pleas at the stage of admission.

The Maharashtra Government and Deshmukh have both challenged the order in the Supreme Court. During the hearing, both NIA and CBI were represented by Additional Solicitor General Anil Singh. Singh sought Waze's custody for a further period of four days.

Singh claimed Rs 1.5 crore in Axis Bank stands in the name of a company floated by Waze, of which Rs 36 lakh and Rs 46 lakh were given to his accomplices. "The agency wants to know the course of the money...was the accused extorting money for himself or someone else," he argued.

"The conspiracy to eliminate [businessman Mansukh Hiran] was hatched between Waze and other accused on March 2 and 3," Singh further alleged. Senior Advocate Aabad Ponda, did not object to the extension of Waze's remand under NIA or him being questioned by the CBI. "I have no objection, it's in my interest to stay in police custody and co-operate with CBI as I have done with NIA," he submitted. Waze was sent to NIA's custody till April 9.

Waze's co-accused, convicted constable Vinayak Shinde and bookie Naresh Gore were also produced in Court. They were remanded in judicial custody after the NIA did not press for an extension. The court rejected Vinayak Shinde's demand for a special jail. "The accused does not have the right to choose the jail, according to the roster he will be sent to the jail for which the name is required." Judge Sitre said.

Waze also tried to put on record his statement against Home Minister Anil Deshmukh and another Cabinet Minister from Maharashtra Government. The court refrained from taking the statement on its record, asking Waze to follow proper procedures.

According to the letter, which is not on the court's record, former minister Anil Deshmukh allegedly asked Waze for Rs 2 crores concerning his suspension and reinstatement.

"In January 2021 I was called by the Hon Home Minister Anil Deshmukh at his official bungalow Dyaneshwar. PA Mr. Kundan was present there. The Hon. Minister Anil Deshmukh told me that there are approximately 1650 bars and restaurants in Mumbai and told me to collect Rs. 3 to 3.5 lakhs each from these for him. On this I told the Hon. HM Sir that as far as I know there would be about 200 bars and not 1650 as he was anticipating."

"I also told the Hon HM I would not be in a position to collect any amount from any such bar for him as it was beyond scope of my capabilities. Immediately after coming out of his chamber his PA Kundan advised me that I must comply with the instructions of the Hon HM sir if I wish to keep my job and post intact. I still refused. That immediately after the meeting I narrated the happenings to the Hon. CP sir."

The document finally states that when he informed then Commissioner of Police Param Bir Singh about his apprehensions of being embroiled in a false case, the CP told him not to get involved in the illegal collection.