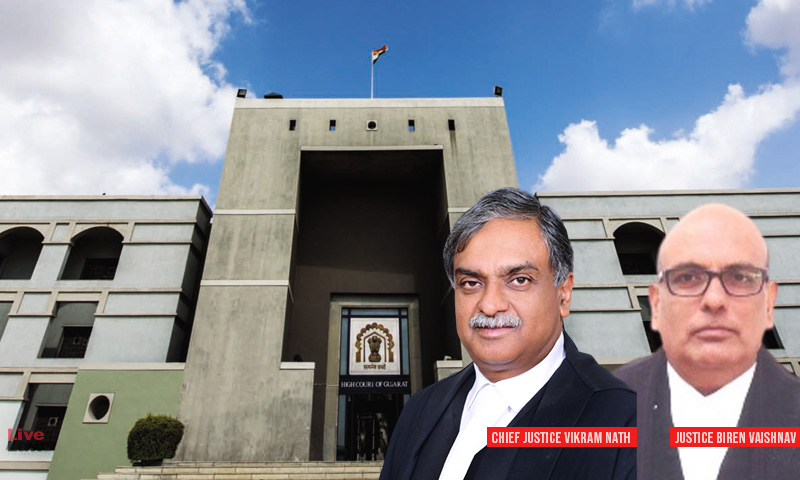 The Gujarat High Court has held that just because a solitary offence has been registered against the appellant-detenu under the Gujarat Prohibition Act, that by itself does not have any bearing on the maintenance of public order. Quashing the detention order under the Gujarat Prevention of Anti-Social Activities Act, a Division Bench of Chief Justice Vikram Nath and Justice Biren...

The Gujarat High Court has held that just because a solitary offence has been registered against the appellant-detenu under the Gujarat Prohibition Act, that by itself does not have any bearing on the maintenance of public order.

Quashing the detention order under the Gujarat Prevention of Anti-Social Activities Act, a Division Bench of Chief Justice Vikram Nath and Justice Biren Vaishnav remarked that the detaining authority has failed to substantiate the alleged anti-social activities of the appellant-detenu adversely affect or are likely to affect the maintenance of public order adversely. The Court noted that,

"Law of preventive detention has to be construed not as in ordinary criminal proceedings of detaining or arresting a person who is said to have committed crime where the procedure is provided and the remedy is available. However, the law of preventive detention is to be strictly followed as per the statute and the settled law on the point. In the present case, we find that there is only a single FIR related to prohibition offences. By no stretch of imagination can we hold that such incidents could describe a person as a bootlegger."

The appellant was detained in pursuance of an order, in the backdrop of registration of offences under Sections 66(1)(b), 65(a), 65(e), 116-B, 98(2) and 81 of the Gujarat Prohibition Act, 1949. The said order was challenged before a Single Judge who refused to interfere with the subjective satisfaction by the detaining authority and confirmed the order of detention.

Advocate Mohddanish M. Barejia, appearing for the appellant-detente, argued for quashing and setting aside the orders passed by Single Judge stating that Vijay Alias Ballu Bharatbhai Ramanbhai Patni v. the State of Gujarat squarely covers the case of the present appellant. He also submitted that the detenu does not fall under the definition of 'Bootlegger' under Section 2(b) of the Gujarat Prevention of Anti-social Activities Act, 1985. It was also argued that there was no breach of law, let alone 'public order' warranting such detention. Reliance was also placed on Piyush Kantilal Mehta v. Commissioner of Police.

Assistant Government Pleader Shruti Pathak opposed the prayer, submitting that the powers conferred on the detaining authority and the procedural safeguards are not devised to allow persons to continue with criminal activities and take advantage of technical loopholes. She argued that the judgement confirming detention was reasoned and in compliance with the procedure prescribed by law.

Despite showing reluctance in interfering with the subjective satisfaction of the detaining authority, the Court noted that based on the facts on record and an appraisal of the provisions of law, the appellant could not be said to be a bootlegger when the offence is solitary. It remarked,

"In the absence of material about disturbance to public order, we find that no compelling circumstance was available with the detaining authority to exercise the power of preventive detention, and the overall facts do not reveal that preventive detention of the detenue was warranted."

Referring to Aartiben v. Commissioner of Police, the Court read the distinction between public order and law and order. The Supreme Court observed in the said judgment as under:

"Does the expression "public order" take in every kind of infraction of order or only some categories thereof? It is manifest that every assault or injury to specific persons does not lead to public disorder. When two people quarrel and fight and assault each other inside a house or in the street, it may be said that there is a disorder but not a public disorder. Such cases are dealt with under the powers vested in the executive authorities under the provisions of ordinary criminal law. Still, the culprits cannot be detained on the ground that they were disturbing public order."

"The contravention of any law always affects order, but before it can be said to affect public order, it must affect the community or the public at large. In this connection, we must draw a line of demarcation between serious and aggravated forms of disorder which directly affect the community or injure the public interest and the relatively minor breaches of peace of a purely local significance which primarily injure specific individuals and only in a secondary sense public interest. A mere disturbance of law and order leading to disorder is thus not necessarily sufficient for action under the Preventive Detention Act, but a disturbance which will affect public order comes within the scope of the Act."

In the present case, there is only a single FIR related to prohibition offences; the Court held that such incidents could not describe a person as a bootlegger. It opined that the registration of a solitary offence against the appellant-detenu under the Gujarat Prohibition Act, by itself, does not have any bearing on the maintenance of public order.