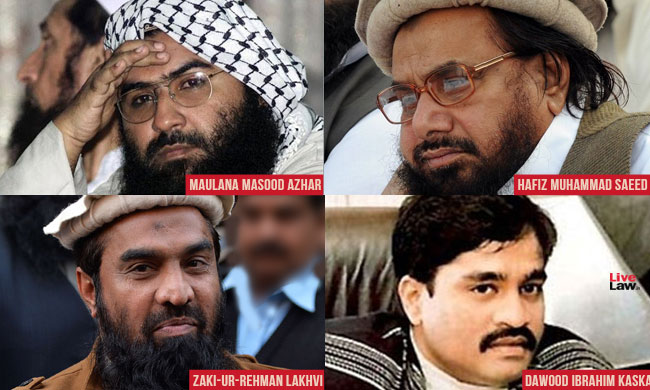 Maulana Masood Azhar was the kingpin in the Pathankot attack and the Pulwama terror attack, wherein Indian security force personnel were killed. He was designated as a global terrorist by the United Nations Security Council (UNSC) in May, 2019. He is the founder, chief and key leader of proscribed terrorist organization, Jaish-e-Mohammad. He was also involved in the terror attacks on the J&K State Legislative Assembly complex in Srinagar and Parliament of India in 2001.

Hafiz Muhammad Saeed was designated as a global terrorist by the UNSC in December, 2008. He is the founder, chief and key leader of proscribed terrorist organisation Lashkar-e-Taiba / Jamat-ud-Dawa. He perpetrated the Red Fort attack in 2000, Rampur attack and 26/11 Mumbai attack in 2008 and attack on BSF Convoy at Udhampur in Jammu & Kashmir in 2015.

Zaki-ur-Rehman Lakhvi was also designated as a global terrorist by the UNSC in December, 2008. He is a founding member and chief operational commander of proscribed terrorist organisation Lashkar-e-Taiba and was involved with Md. Saeed in the all the four aforementioned attacks.

Dawood Ibrahim Kaskar runs an international underworld crime syndicate and is involved in perpetrating acts of terror, promoting religious fundamentalism, terror financing, etc. He was designated as a global terrorist by the UNSC in December, 2008. He supports the activities of Osama bin Laden, Al-Qaeda and the Taliban and was involved in the 1993 Mumbai Blasts and has benami real estate business in India.