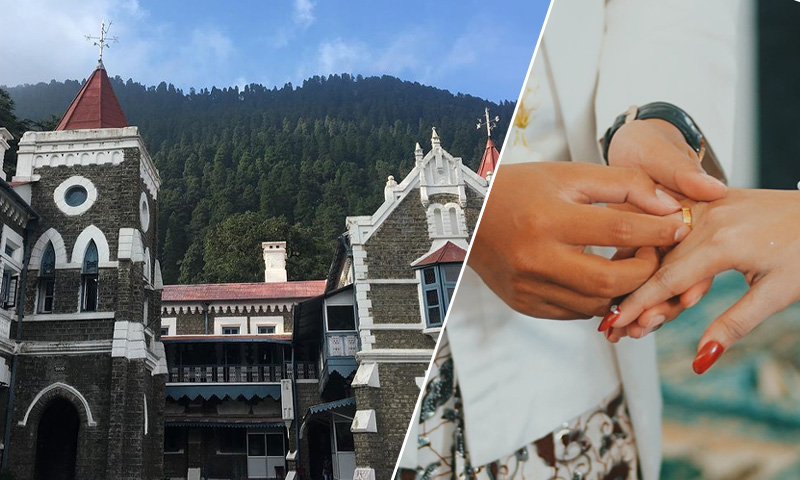 The Uttarakhand High Court on Wednesday (23rd December) directed the District Magistrate, Haridwar to inquire from the appropriate authorities and persons as to why application of petitioner no.1 (Anjali @ Afsana) for conversion has not been processed and if processed when. The Bench of Justice Sudhanshu Dhulia and Justice Ravindra Maithani gave this order in a protection plea filed...

The Uttarakhand High Court on Wednesday (23rd December) directed the District Magistrate, Haridwar to inquire from the appropriate authorities and persons as to why application of petitioner no.1 (Anjali @ Afsana) for conversion has not been processed and if processed when.

The Bench of Justice Sudhanshu Dhulia and Justice Ravindra Maithani gave this order in a protection plea filed by an interfaith couple apprehending that the brothers of Anjali @ Afsana may physically harm them.

Both the petitioners asserted before the Court that they belong to different faiths and after petitioner no. 1 converted to the faith of petitioner no.2 i.e. Hindu, the two married on 16.12.2020.

They also submitted before the Court that moved an application before the concerned District Magistrate, but no decision has been taken on it.

[NOTE: As per Section 8(1) of Uttarakhand Freedom of Religion Act, 2018, one who desires to convert his religion, shall give a declaration at least one month in advance, in the prescribed proforma, to the District Magistrate or the Executive Magistrate specially authorized by District Magistrate that he wishes to convert his religion on his own and at his free consent and without any force, coercion, undue influence or allurement.]

This Court interacted with them and observed,

"They seem to be articulate and they both have apprised this Court that they have a threat perception at the hands of the private respondent nos.3 and 4."

Giving the aforesaid direction to the DM, Haridwar, the Court, as an interim measure, directed the Senior Superintendent of Police, Haridwar to coordinate with the subordinate officers of Police and give suitable directions to the concerned SHO, to provide necessary protection to the petitioners "as there is a threat perception at the hands of respondent nos. 3 & 4."

The Court has also issued notice to respondent nos.3 & 4 (brothers of the girl). Three weeks' time has been granted to the respondents to file counter affidavit.

Matter has been posted for further hearing on 05th March 2021.

In related news, the Uttarakhand High Court recently directed the District Magistrate, Dehradun to conduct a detail inquiry about non-compliance of Section 8(2) of the Uttarakhand Freedom of Religion Act, 2018 which mandate Religious Priests to give prior intimation to the concerned District Magistrate, before performing conversion of a person from one religion to another.

The Uttarakhand Freedom of Religion Act was enacted in the year 2018 with the stated objective "to provide freedom of religion by prohibition of conversion from one religion to another by misrepresentation, force, undue influence, coercion, allurement or by any fraudulent means or by marriage and for the matters incidental thereto".

In the celebrated Judgment of Shakti Vahini v. UOI & others, the Supreme Court of India in the year 2018 held that "when two adults marry out of their volition, they choose their path; they consummate their relationship; they feel that it is their goal and they have the right to do so."

The Calcutta High on Monday (21st December) made it clear that if an adult marries as per her choice and decides to convert and not return to her paternal house, there could be no interference in the matter.

Further, in November 2020, the Karnataka High Court held that the right of any major individual to marry the person of his/her choice is a fundamental right enshrined in the Constitution of India.

In a controversial ruling, which was later on declared as bad in law, the Allahabad High Court had, on 23rd September 2020, dismissed a writ petition seeking police protection filed by a married couple.

This was after the Court had noted that the girl was a Muslim by birth and she had converted her religion to Hinduism, just a month before the marriage was solemnized.

Justice Mahesh Chandra Tripathi had referred to a 2014 judgment in Noor Jahan Begum @ Anjali Mishra & Anr. v. State of U.P. & Ors., in which it was observed that conversion just for the purpose of marriage is unacceptable.

Overruling this Judgment and declaring it bad in law, the Allahabad High Court has, on 11th November, specifically observed that "Right to live with a person of his/her choice irrespective of religion professed by them, is intrinsic to right to life and personal liberty."

"We hold the judgments in Noor Jahan and Priyanshi as not laying good law," the Court further ruled.