Would You Give An Unconditional Apology About Your Tweet on Justice Muralidhar: Delhi HC Asks Gurumurthy 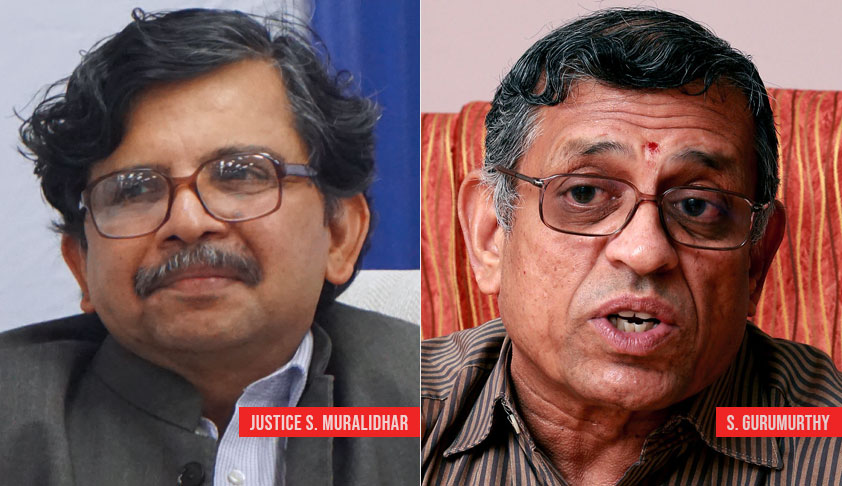 Delhi High Court has asked S Gurumurthy as to whether he would add a statement of unconditional apology in his reply, and tweet the same on his account, in a contempt case against him. The matter pertains to the tweet of S Gurumurthy where he had posted a question stating whether Justice Muralidhar was P Chidambaram's junior. This tweet was made after interim protection...

Delhi High Court has asked S Gurumurthy as to whether he would add a statement of unconditional apology in his reply, and tweet the same on his account, in a contempt case against him.

The matter pertains to the tweet of S Gurumurthy where he had posted a question stating whether Justice Muralidhar was P Chidambaram's junior. This tweet was made after interim protection was granted to Karti Chidambaram by the Division Bench of Justice Muralidhar and Justice IS Mehta, in the INX Media case.

Pursuant to this, Justice Muralidhar had categorically clarified that he had no relationship of any kind with P Chidambaram; that he has never worked as Chidambaram's junior.

In the suo motu matter for contempt, Senior Counsel Sudhanshu Batra had argued that the reply filed by Gurumurthy to the contempt application, lacked genuine remorse and an unconditional apology.

Appearing for Gurumurthy, Senior Counsel Mahesh Jethmalani informed the court that Gurumurthy already clarified his statement in his reply and he has already deleted the tweet.

He informed the court that Gurumurthy made the following statement in his reply:

'I have no personal animosity against the judge and I have the highest regards for him. My tweet was not intended to cause any contempt towards him. I had received an information from a credible source, and therefore, my question on Twitter was merely a request for clarification on the same. I did not have any mal-intent behind tweeting that question'.

Asking about the nature of his tweet, Justice Bhambhani observed that there's a difference between a statement being made in an informal gathering, and the one made on a public portal.

He went on to say that the problem is that the said question was asked on a public portal where it can run a rumour mill. Even if you (Gurumurthy) deleted it, a bell can't be unrung. Such kind of information darts across the globe in a jiffy.

Adding to the same, Justice Sistani asked Mr Jethmalani that he really thinks that judges are that week that they'll get influenced just because they went to someone's house or worked under someone.

He also asked Mr Jethmalani that does he remember the names of all the people who have worked under him.

The court had given an opportunity to Gurumurthy to submit his apology post lunch, but the same did not materialise.

Therefore, the Division Bench of Justice Sistani and Justice Bhambhani have observed that Gurumurthy can add a statement to his reply that he tenders an unconditional apology for the question that he had tweeted.

The court noted that the clarification made by Gurumurthy in his reply is satisfactory, provided he adds the said sentence about apology in his statement.

The court also observed that the said apology can also be tweeted by Gurumurthy through his Twitter account. The court noted that such apology should reflect the genuine remorse of a nature that the person making it would also expect if someone has said something wrong about him.

The matter has been adjourned till December 10. The court has asked Mr Jethmalani to appear in the next hearing with complete instructions or with the presence of Gurumurthy himself.
TagsDelhi HC Gurumoorthy #Justice Muralidhar Tweet Against Justice Muralidhar Twitter Apology For Tweet
Next Story
Similar Posts
+ View more
Law Firms
+ More