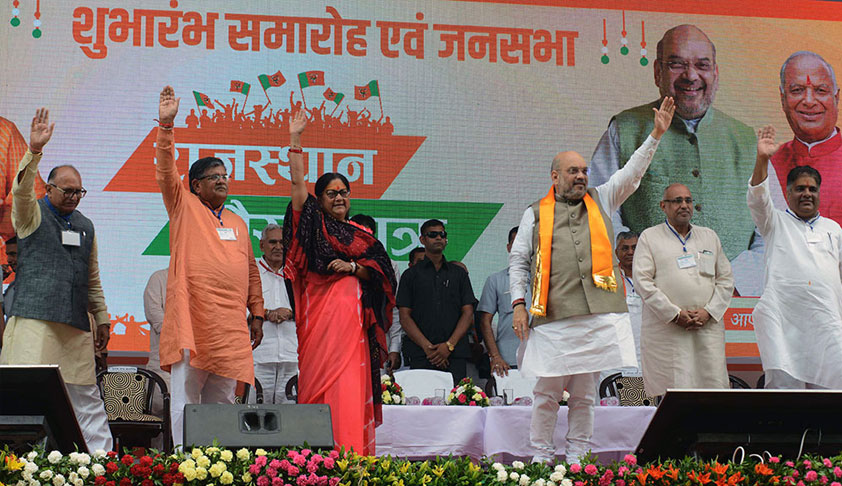 The Rajasthan High Court on Wednesday directed the Vasundhara Raje government to abstain from conducting State sponsored functions during the ongoing Gaurav Yatra.

The Bench comprising Chief Justice Pradeep Nandrajog and Justice GR Moolchandani ordered, “…we declare that henceforth no public functions sponsored and financed by the State would be held during the road-shows i.e. Gaurav Yatra to be undertaken by the Bhartiya Janta Party in the State of Rajasthan. Meaning thereby, on the day of the Gaurav Yatra no Government functions would be held enroute when the Chief Minister and the functionaries of the Bhartiya Janta Party halts the Gaurav Yatra for some time and re-commences the same after the break.”

The Court was hearing a PIL filed by Vibhuti Bhushan Sharma and Sawai Singh, alleging that public funds were being used for a political event. To this end, they had relied on an office order issued by the Public Works Department (PWD), stating that PWD would be providing the tent, sound system and stage for the Chief Minister’s public meetings during the Yatra.

The State, on the other hand, had submitted that the CM’s security arrangements are always to be borne by the State, regardless of whether the travel is official or personal. It had further contended that money spent on protocol and security arrangements cannot be alleged to be expenditure incurred towards a political rally.

Examining the contentions before it, the Court relied on the judgment in the case of Common Cause v. Union of India, noting that the Supreme Court had, while recognizing the government’s right to publicise its social welfare schemes, frowned upon publicity that would benefit an individual member of a political party, rather than highlighting the government’s achievements.

It relied on another Supreme Court decision in Common Cause v. Union of India, wherein the Court had acknowledged the fact that the dividing line between permissible advertisements that are a part of government messaging and advertisements vis-a-vis those which are politically motivated at times get blurred. It had then laid down five principles for addressing these conundrums.

The Court then took note of various tenders inviting bids for the Yatra, observing, “Reading the notice concerning works for which bids have been invited, sans description of the works, it is apparent that during the road-shows public platforms are being erected at Government cost. Thus, the inevitable conclusion on facts has to be that under the cover up of the notice inviting tenders where detailed description of the works to be executed have not been listed, money is being spent for erecting public platforms wherefrom the Chief Minister would address political rally.”

The Court further noted that the government functions for inaugurating State projects or exhibitions publicising State’s social welfare schemes would be held during the Gaurav Yatra. Besides, it opined that State sponsored and State financed programmes are so intermingled with the Gaurav Yatra that it would be impossible to segregate one from the other.

“It is trite that the impact of an act has to be understood from the view point of understanding by the mythical common man. To a common man, if during the Gaurav Yatra, which is a political event, the leader of a political party who happens to be the Chief Minister inaugurates public functions, the understanding would be the glorification of the political party and not the glorification of the achievements by the Government,” it  then explained, while ruling that no function sponsored by the State would be held during the Gaurav Yatra.