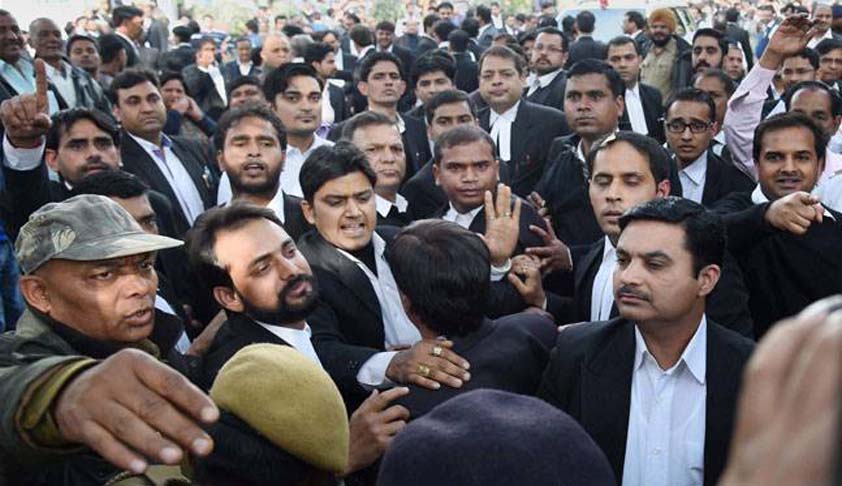 Reacting to the violence that ensued at Patiala House Courts, the All India Lawyers Union has written to Delhi High Court Chief Justice G. Rohini demanding an action against the mob which obstructed judicial work and assaulted journalists on Monday.The letter, written by General Secretary Mr. Som Dutta Sharma, notes that “lawyers affiliated to a particular ideology” had invited...

Reacting to the violence that ensued at Patiala House Courts, the All India Lawyers Union has written to Delhi High Court Chief Justice G. Rohini demanding an action against the mob which obstructed judicial work and assaulted journalists on Monday.

The letter, written by General Secretary Mr. Som Dutta Sharma, notes that “lawyers affiliated to a particular ideology” had invited their followers through an “inflammatory message”. The lawyers involved in the scuffle are identifiable in the video footage, the letter claimed.

Shunning the incident, the letter stated, “The above acts tantamount to obstruction in administration of Justice and violation of rule of law which are corner stone of our Constitution. (sic)

All India Lawyers Union is approaching your good self with hope and trust that you as head of Judiciary of Delhi shall protect the rule of law which is under threat. The persons who are identifiable as members of the mob and those who resorted to violence and obstruction to administration of justice have committed contempt of court and are required to be appropriately dealt with. For their brazen acts suo motu action by the High Court is called for.”

The letter goes on to blame the Police personnel for being silent spectators of the incident, and thereby abetting the attackers. It calls for attention of the Commissioner of Delhi Police, to “discipline the police force under him” and take appropriate action against the erring police officials.

Press Council of India has also sought a report on the attack on journalists, from the Police Commissioner of Delhi. Speaking to TOI, PCI chief Justice (retired) C.K. Prasad said, “Assault against journalists is not acceptable. We have asked for a report from the Delhi Police and will take further action after that.”

The National Broadcasters Association also condemned the attack. “NBA condemns the assault by lawyers and others on journalists and cameramen, especially women journalists, who were reporting from Patiala House court yesterday,” a statement by the Association said.

The attack was termed as “cowardly” by NBA President Rajat Sharma. According to him, the attack was meant to intimidate journalists from carrying out their job, which is to disseminate news and information. This was, Mr. Sharma said, “an attack on the freedom of the press.”

Journalists had organized a protest march against the attack, from Press Club of India to the Supreme Court and submitted a memorandum to its registrar seeking cancellation of licenses of lawyers involved in the assault. The lawyers also demanded Police Commissioner B.S. Bassi’s dismissal due to inaction on part of the security personnel.

The JNU row had taken an ugly turn on Monday, when at least ten journalists and several students were assaulted by lawyers and a Delhi BJP MLA inside and outside the Patiala House Courts, where the sedition case against JNU Student Union President Kanhaiya Kumar was to be heard. Bar Council of India has taken a serious note of the incident and has decided to conduct an inquiry headed by a former High Court Judge. You may read the LiveLaw article here.

The Apex Court has agreed to hear a Petition filed by a Social Worker and Alumnus of Jawaharlal Nehru University (JNU) seeking immediate intervention of the Court in the Patiala House Court incident. You may read the LiveLaw article here.

You may read: #JNU: From Sedition to Unlawful Activities: A Road to Perdition? By: Kanad Bagchi