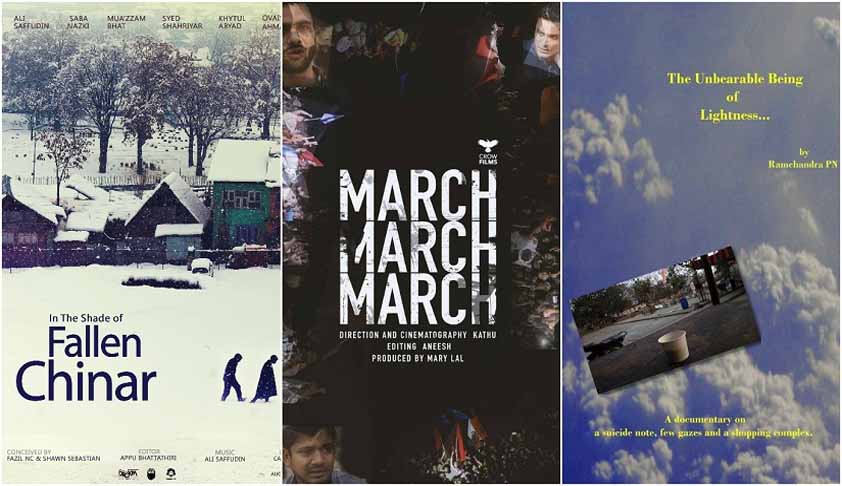 The High Court of Kerala has been approached by the Director of one of the three films which have been denied screening permission at the International Documentary and Short Film Festival of Kerala in Thiruvananthapuram, challenging the I&B Ministry’s decision.

The Petitioner Ms. Kathu Lukose’s March March March examines student protests at Jawaharlal Nehru University in Delhi. In the Petition, Ms. Lukose challenges the denial of exemption under Section 9 of the Cinematograph Act, 1952 as “arbitrary, unconstitutional and against the ends of justice.” Section 9 of the Act empowers the Central Government to exempt any film from the process of certification.

Ms. Lukose further contends that the order passed under Section 9, being a “laconic non speaking order is affront on the freedom of expression enshrined under Art. 19 (1) (a) of the Constitution of India (sic).” This order, she submits, “can nip at the bud of the creativity of an artist and the right of the selected viewers to enjoy the film.” She, thereafter, demands that the Centre be directed to provide records and consideration for the refusal of exemption.

The other two proscribed films are The Unbearable Being of Lightness by PN Ramachandra and In the Shade of Fallen Chinar by NC Fazil and Shawn Sebastian. Ramachandra’s film, about the aftermath of PhD scholar Rohith Vemula’s suicide at Hyderabad Central University, has uploaded his film for free viewing on Vimeo. In the Shade of Fallen Chinar, which comprises interviews with students at the University of Kashmir in Srinagar, has been on YouTube for months.

A protest letter, signed by 160 filmmakers from across the country, has also been sent to I&B Minister Mr. M. Venkaiah Naidu. The letter reportedly calls the ban “draconian” and states, “A brief perusal of the themes of the films denied screening – the suicide of research scholar Rohit Vemula, on artists in Kashmir, and on the student protests at JNU – indicates that each one of these films is dealing with prominent political issues that have led to much discussion within the country. It is also clear that the government of the day is resorting to draconian action to stifle all such political debate and indeed Article 19 of our constitution, which guarantees the right to freedom of expression to every citizen of this country.  We also note that the Ministry of Information and Broadcasting has not given any reason for its withholding of screening permission.”