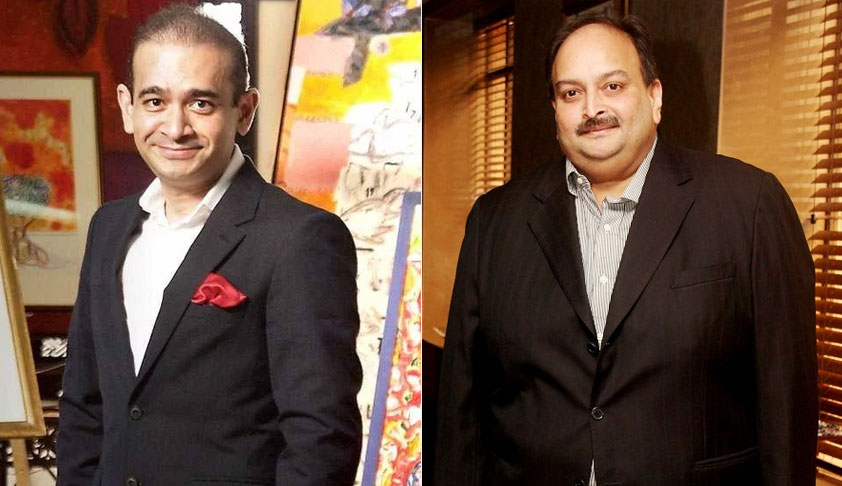 Amidst the ongoing investigation into the Rs. 12,600 crore Punjab National Bank (PNB) fraud, Mumbai Bench of the National Company Law Tribunal (NCLT) has restrained Nirav Modi, Mehul Choksi and 62 others associated with the two diamond dealers from removing, transferring or disposing of funds, assets and properties of entities and individuals.Listing down such entities, the NCLT Bench...

Amidst the ongoing investigation into the Rs. 12,600 crore Punjab National Bank (PNB) fraud, Mumbai Bench of the National Company Law Tribunal (NCLT) has restrained Nirav Modi, Mehul Choksi and 62 others associated with the two diamond dealers from removing, transferring or disposing of funds, assets and properties of entities and individuals.

Listing down such entities, the NCLT Bench comprising BSV Prakash Kumar and V. Nallasenapathy ruled, "In view of the same, this Bench, by invoking section 221 of the Companies Act, 2013 and section 43 of LLP Act, 2008, hereby injunct the Respondents and other companies, LLPs, Trusts and individuals mentioned above from removal, transfer or disposal of funds, assets and properties of the entities and individuals mentioned above until further orders."

The ex-parte order was passed on a Petition filed by the Ministry of Corporate Affairs demanding inter alia disclosure of moveable and immovable assets of the Respondent entities, as well as handing over of such assets to the MCA. It had further demanded that the Respondents be restrained from mortgaging, creating charge or lien or third-party interest or alienating any of the assets so that the government can recover funds.

Taking note of MCA's submissions, the Bench observed that even though trusts and individuals are not covered under Section 221 of Companies Act, 2013, or Section 43 of Limited Liability Partnership (LLP) Act, 2008, a restraining order was "very much necessary" as the MCA had categorically stated that funds had been routed to individuals and trusts through various companies.

The matter has now been listed on 26 March, with a direction to the MCA to serve notice to all Respondents within 15 days.

It was on 14 February that the Punjab National Bank (PNB) informed the Bombay Stock Exchange that it had detected “fraudulent and unauthorized transactions” amounting to $1.8 billion at its Brady House branch in Mumbai.

It was revealed that PNB officials handed out Letters of Undertaking to companies associated with Mr. Modi, allowing him to avail credit from overseas branches of Indian banks. None of these "fraudulent transactions" were registered on the bank's Core Banking Solution (CBS), thereby going unnoticed. It was later revealed that bank employees had colluded with Mr. Modi, and had misused their access rights, facilitating the fraud.

Apart from the investigation being carried out by the CBI, the Supreme Court is also hearing two petitions- one filed by Advocate Vineer Dhanda and another filed by Advocate Manohar Lal Sharma. Mr. Dhanda's Petition demands that the Finance Ministry and the Reserve Bank of India (RBI) be directed to frame guidelines for grant of loans more than INR 10 crores.

Besides seeking registration of cases against all those involved in the fraud and "immediate deportation" of Mr. Modi, the Petition also demands that a committee of experts be created to document details of bad debts in the country. It, in fact, calls it the "biggest scam in the history of banking system in India", pointing out that it began in 2011 and continued for a period of 6 years in full view of the authorities. It, therefore, raises several questions on the efficiency of the CBS as well.

Mr. Sharma's Petition seeks a Court-monitored SIT probe into the banking fraud. It hints at attempts of concealing information, claiming that “despite having information about the fraud on January 16, PNB did not report it to the police or CBI but got busy in changing the bank records/ other written information at the behest of the Finance Minister and only on January 29 was a complaint made to the CBI Mumbai branch naming 7 bank employees and three companies showing a loss of Rs 280.70 crores”.