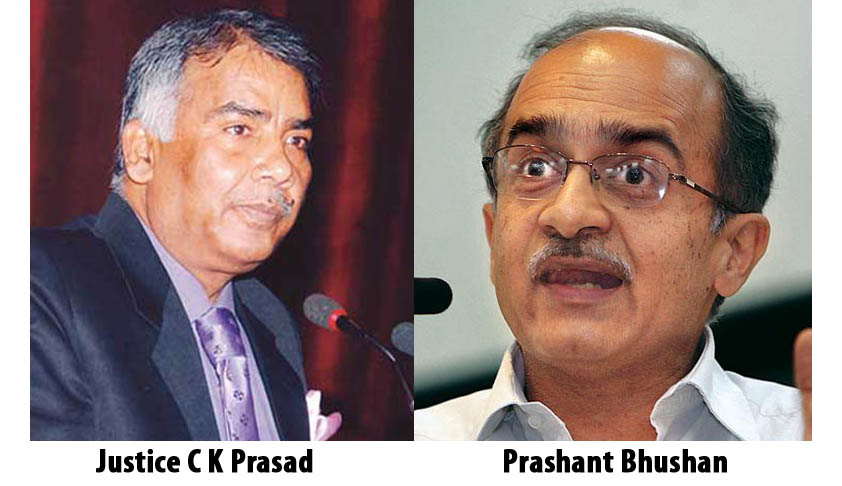 Activist and lawyer, Prashant Bhushan, in a letter to the Central Vigilance Commission, has complained “for investigation concerning abuse of office & criminal misconduct by Justice C K Prasad, former Judge of Supreme Court.” He has requested that the matter should be investigated thoroughly and impartially by CBI after registering an FIR. He has also sent a similar complaint to...

Activist and lawyer, Prashant Bhushan, in a letter to the Central Vigilance Commission, has complained “for investigation concerning abuse of office & criminal misconduct by Justice C K Prasad, former Judge of Supreme Court.” He has requested that the matter should be investigated thoroughly and impartially by CBI after registering an FIR. He has also sent a similar complaint to CBI.

He alleges that Justice Prasad “abused his position as a Judge to confer significant monetary benefit on a private party (Mistry Constructions) and thus committed criminal misconduct under Section 13 (1) (d) of the Prevention of Corruption Act.”

He adds, “Please note that registration of FIR is mandatory (after the constitution bench judgment of Supreme Court of 2014) once there are allegations of cognizable offences having being committed.”

The letter by Mr. Bhushan refers to a letter written in February by Senior Advocate Dushyant Dave, to the then Chief Justice of India, P. Sathasivam, which states that Justice C.K. Prasad while hearing a Special Leave Appeal (crl) no. 7232/20113, ordered to list civil appeal no. 9454-3455/2013 (though he intended that civil appeal no. was 9454-9455/2010 be listed) as the matter were of similar nature on his own and without any of the counsels asking for the same. On the next hearing when matter came up on board, civil petitions were not listed because of wrong civil appeal no being mentioned in the previous order. The court again ordered to tie up the matter as urgent.

When both of the matters when came up for hearing on 25th February 2014, at the outset itself, Justice C.K. Prasad who was heading the Bench,  accepted the submission of Senior Advocate C.U Singh, that both the matters were not connected to each other. Despite, there being no connection, civil appeal no 9454-9455/2010 was taken up and in the absence of any effective representation from City and Industrial Development Corporation of Maharashtra (CIDCO), the civil appeal was allowed without any debate. This was despite the fact that settlement was rejected earlier by a three Judge Bench of the Supreme Court through an order dated 25.04.2013. This had led to Mistry Construction obtaining the respective tender and 35 hectares of prime land worth hundreds of crores which was rejected by the Bombay High Court.

In the letter, it has been alleged that Justice Prasad’s former junior’s in-laws are the main owners of Mistry Constructions and hence Justice Prasad was aware of this case and had an interest in the matter.

Mr. Bhushan had earlier, in a letter addressed to Prime Minister Modi, demanded that an independent body should be set up which would exclusively deal with the appointments of retired Judges to important offices. This step will, it said, “restore the trust of people in the credibility of various offices and the judiciary.” Read the LiveLaw story here.

The controversy was however, put to rest in September, for a short period of time, by a Supreme Court Bench comprising of Justice Chelameswar and Justice P.C. Ghose, after they dismissed the Review Petition filed by City & Industrial Development Corporation of Maharashtra (CIDCO) and had indirectly dismissed Dave’s allegations. Read the Live Law story here. Live Law  has learned that a Senior Advocate, who is known for his integrity, has even given a Certificate for filing curative petition, but CIDCO has not taken any steps towards the same

In view of the specific allegations complaint, the matter has attained a different dimension.