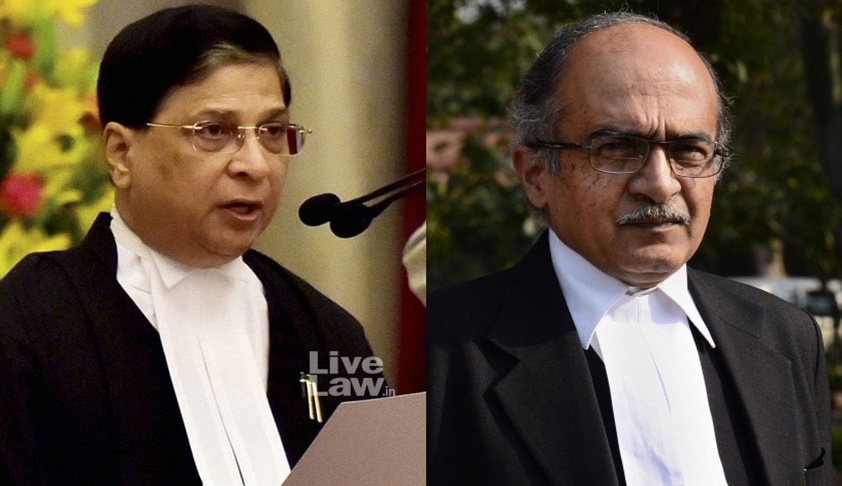 After the plea against dismissal of impeachment motion against Chief Justice of India Dipak Misra was withdrawn today as the Apex Court refused to provide a copy of the order constituting the Constitution Bench, Supreme Court Prashant Bhushan has now filed a Right to Information Application seeking the information.

In the application, Mr. Bhushan asks whether the petition filed by Mr. Partap Singh Bajwa and Mr. Harshadray Yajnik was listed today before the Constitution Bench by way of an administrative order. He then seeks to know who passed the administrative order, as well as asks for a copy of the same.

The Petition was argued today for nearly 45 minutes before being dismissed as withdrawn. During the hearing, Senior Counsel Kapil Sibal presented the following propositions before the Bench comprising Justices A.K. Sikri, S.A. Bobde, N.V. Ramana, Arun Mishra and A.K. Goel:

II. Reference to five Judges can only be made by a judicial order. The Rules of the Supreme Court do not allow the Chief Justice of India to pass an administrative order to refer a matter to five Judges on the ground that a substantial question of law as to the interpretation of the Constitution arises in the case.

III. In the present case, there is no judicial order formulating the substantial question of law involving the interpretation of the Constitution which is required to be adjudicated upon by a Constitution Bench.

IV. It is assumed, since the Petitioners are not privy to any such order, that the concerned authority took the decision that the issues raised in the petition are required to be adjudicated upon by five distinguished judges after due application of mind on the issues raised in the petition. The Petitioners are entitled to know the authority who on the administrative side passed an order to refer this matter to five distinguished judges.

V. If the authority happens to be the Chief Justice of India against whom a motion of removal on the basis of certain articles of charge was filed and dismissed by the Chairman in exercise of powers under 3(1)(b) of the Judges (Inquiry) Act, 1968, then the Petitioners are entitled to be informed of the order and contend that a copy of the order be furnished to the Petitioners before any proceedings take place.

VI. If that order has been passed by the Chief Justice of India constituting the Bench then the Petitioners seek to challenge the order on such grounds as the Petitioners may deem fit.

VII. It would be inappropriate for the Petitioners to seek any indulgence of this Court on the merits of this case till such time as such opportunity is afforded to the Petitioners.

With these assertions, Mr. Sibal vehemently insisted on a copy of the administrative order for the constitution of the Bench. The Bench, however, refused it and asked Mr. Sibal to argue the case on merits.

The reply to this RTI application will lead to another round of litigation. The petitioner can challenge the order constituting the bench (if it was done by the CJI) after receiving the copy of the order.